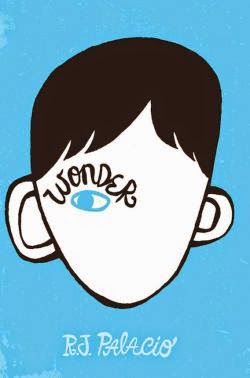 why i read it: i saw it on the wall of bestsellers near the information desk at barnes & noble’s. the cover caught my eye.

and the first page: i know i’m not an ordinary ten-year-old kid. i mean, sure i do ordinary things. i eat ice cream. i ride my bike. i play ball. and i feel ordinary. inside. but i know ordinary kids don’t make other ordinary kids run away screaming in playgrounds…

if i found a magic lamp and i could have one wish, i would wish that i had a normal face that one one ever noticed at all…

my name is augustus, by the way. i won’t describe what i look like. whatever you’re thinking, it’s probably worse.

what i liked: “who is your favorite character?” julian asked. i started thinking maybe he wasn’t so bad.

maybe no one got the darth sidious thing, and maybe julian didn’t mean anything at all. but in star wars episode iii–revenge of the sith, darth sidious’s face gets burned by sith lightning and becomes totally deformed. his skin gets all shriveled up and his whole face just kind of melts.

“we sat together at lunch,” i said.

i had started kicking a rock between my feet like it was a soccer ball, chasing it back and forth across the sidewalk.

“yeah, i know,” i answered. “we’re kind of like beauty and the beast.”

i didn’t wait to see mom’s reaction. i just started running down the sidewalk after the rock, which i had kicked as hard as i could in front of me (p. 56).

mom put the book down and wrapped her arms around me. she didn’t seem surprised that i was crying. “it’s okay,” she whispered in my ear. “it’ll be okay.”

“i’m sorry,” i said between sniffles.

“shh,” she said, wiping my tears with the back of her hand. “you have nothing to be sorry about.”

“why do i have to be so ugly, mommy?” i whispered.

she said soft words that i know were meant to help me, but words can’t change my face (p. 60).

for me, halloween is the best holiday in the world. it even beats christmas. i get to dress up in a costume. i get to wear a mask. i get to go around like every other kid with a mask and nobody thinks i look weird. nobody takes a second look. nobody notices me. nobody knows me.

i wish every day could be halloween. we could all wear masks all the time. then we could walk around and get to know each other before we got to see what we look like under the masks (p. 73).

i knew it wasn’t a bleeding scream they were looking for. it was a boba fett.

i was going to go and sit at my usual desk, but for some reason, i don’t know why, i found myself walking over to a desk near them, and i could hear them talking…

one of the mummies would say: “it really does look like him.”

“like this part… ” answered julian’s voice. he put his fingers on the cheeks and eyes of his darth sidious mask… “if i looked like that,” said the julian voice, kind of laughing, “i swear to god, i’d put a hood over my face every day.”

“i’ve thought about this a lot,” said the second mummy, sounding serious, “and i really think… if i looked like him, seriously, i think that i’d kill myself… i can’t imagine looking in the mirror every day and seeing myself like that. it would be too awful. and getting stared at all the time…” the mummy shrugged. i knew the shrug, of course. i knew the voice. i knew i wanted to run out of the class right then and there. but i stood where i was and listened (p. 77).

i ended up in the second-floor bathroom. no one was there because first period had started and everyone was in class. i locked the door to my stall and took off my mask and just cried for i don’t know how long. then i went to the nurse’s office and i told her i had a stomach ache, which was true, because i felt like i’d been kicked in the gut (p. 79).

anyway, it’s not that i care that people react to me. like i said a gazillion times: i’m used to that by now. i don’t let it bother me. it’s like when you go outside and it’s drizzling a little. you don’t put on boots for a drizzle. you don’t even open your umbrella. you walk through it and barely notice your hair getting wet.

but when it’s a huge gym full of parents, the drizzle becomes like this total hurricane. everyone’s eyes hit you like a wall of water (page 207).

i read a good chunk of this on the flight to utah. i had to pause every so often because the tragedy of this boy’s life broke my heart.

what sucked: the last fifty pages or so. what was an incredibly touching tale became a really cheesy, preachy one. i was kind of disgusted by the conclusion. way too schmaltzy. it sort of wrecked it for me.

having said all that: it’s rare that a book affects me so. and maybe it did this because my childhood resembled august’s in some ways. maybe i’m overly sensitive and far too compassionate. but even though the ending annoyed me, i’m glad i read this story. because i like august. he’s a good kid.

One response to “wonder”