wicked: the life and times of the wicked witch of the west 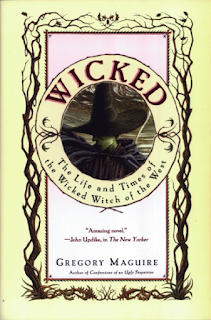 why i wanted to read it: because i figured, given the novel’s and play’s popularity, i should. because i needed something with a cardinal direction in the title for erin’s book challenge.

what i liked: [fiyero] “why should i keep myself so safe?” he asked her, but he was almost asking himself. what is there in my life worth preserving? with a good wife back there in the mountains, serviceable as an old spoon, dry in the heart from having been scared of marriage since she was six? with three children so shy of their father, the prince of the arjikis, that they will hardly come near him? with a careworn clan moving here, moving there, going through the same disputes, herding the same herds, praying the same prayers, as they have done for five hundred years? and me, with a shallow and undirected mind, no artfulness in word or habit, no especial kindness toward the world? what is there that makes my life worth preserving?

“i love you,” said elphaba. [aka, the wicked witch of the west]

there were probably a couple of other things, but i listened to this one on audio, and that was the only passage i felt like hunting through the text to find.

what sucked: my biggest complaint is that maguire spends so much time talking about trivial stuff and so little time digging into details that have some relevance to the plot. maybe if i’d read the four hundred six pages, i would’ve been able to skim the small shit and spend more time on the more meaningful things, but then, i wasn’t that interested in this story, which is why i listened to it instead. also, it’s long.

having said that: i love the idea for this story. i liked seeing that elphaba could love and be loved. but i can’t reconcile the wickedness i saw in her character in film the wizard of oz with the so-called wickedness of her character in this story. she’s mean, sure — angry, resentful, bitter, hostile. but i can’t call her wicked, so i kind of feel like maguire dropped the ball on this one — that he didn’t make her hateful enough. i have compassion for her, in the end. and i didn’t want to.