from time to time during games at kyle field, the cameras hone in on members of the twelfth man, usually the cute — babies, toddlers and the physically blessed — or enthusiastic fans, like those who have forgone shirts for body paint. just long enough that the individuals involved are aware their mugs grace the big screen in the south endzone. 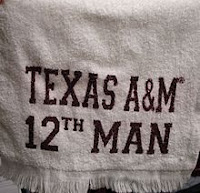 last saturday, one of those individuals was a man holding up a twelfth man towel, upon which he’d written in black, block letters she said yes.

now, normally i’m not a fan of the proposals that call attention to themselves. i’ve seen’m advertised on big screens in ball parks, dropped in glasses of wine or buried in a dessert, or …

written in the sky. like the one i saw today as i was walking from work to my car. there’s a plane overhead. a banner with red block letters boasting a woman’s name, the question and the man’s name.

my first reaction was to smile and think how sweet. but that only last a millisecond. because, really? it’s not sweet. that one’s not about the joy of the thing. it’s not even about the thing, really. or the woman. it’s about the man. about the story the woman can tell her friends about the man.

i’d much rather be the girl standing next to the guy with the towel. sure he asked her in a football stadium, surrounded by nearly ninety-thousand people. and sure, it got attention.

and when she said yes, they got to share in their excitement. afterward. in a way that made the people in that stadium smile and think how sweet, a sentiment that stuck with them for much longer than a millisecond.

do you know how i know this? because when i saw that stupid plane with its silly banner, i thought of that other proposal, of the sheer happiness on those young faces, and smiled again. and thought how sweet again.

that other one? i’ll have forgotten it by next saturday. at the latest.

One response to “two proposals”