i’ve been dreading christmas this year, for reasons i can’t discuss here except to say that i am not happy. i am heartbroken.

i have been trying very hard to find good in my days, though. to find laughter. i’m trying to focus on that good. on the gifts this year has bestowed.

like in january, the film industry gave us gangster squad, which is one of the better movies released this year. 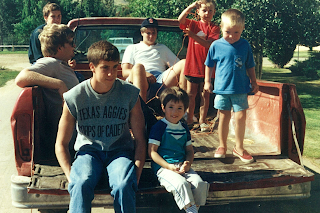 i cleaned out my closet and desk and found keepsakes from my college days and an envelope with my older brother’s handwriting on it (which doesn’t sound like a big deal, but i’ve started to forget a lot of things where’s he’s concerned, like what his handwriting looked like.)

Thank you for sharing this and allowing yourself to be so vulnerable. It is hard to write, but stuff like this is great for readers because it makes me feel like I am not alone and makes us all feel like we are all in this together.

And I’ve ALWAYS loved that quote by Emily Dickinson. Hope you get feeling better and thanks for the reminder to be kind to all those who cross my path.

Just found your blog and have enjoyed your writing! I’m excited to read more.

in february, i read the first of three magnificent stories: the language of flowers. i dragged my ass to the galleria mall (ugh), to some singles mixer (UGH) some dating website had organized (which sucked), but afterward, i drove to pappadeaux’s where i downed a couple of martinis and ran into one of my older brother’s corps buddies from a&m.

in april, one of the to-go servers gave me a good idea for a scene in the novel i (probably) will (never) finish. i read the second of three magnificent stories: the fault in our stars. i went to my first maroon and white game. i made up a list of some of my favorite melodies.

in may, because of tyler, i learned of the existence of this video. i posted about some of the things that make me happy. i wrote this scene for that novel, which made me love my characters and my craft even more. and there’s tony and ziva (damn you, ncis & cote de pablo! ziva’s not replaceable!). and kensi and deeks. my store manager told me she thought i was special, which i very much needed to hear at the time.

in june, i posted about my favorite characters; they are the reasons i love literature. i wrote about my father, the best man i know. the best blogger in the world told me this: you have talent. my cousins taught me how to play settlers of catan. i read the third of three magnficient stories: eleanor and park. and then there’s wendy davis standing up to the good ole boys.

in july, bonnie let me guest post on her blog. i watched purple violets, which is the best of edward burns’ films (and i always caught it halfway through… i finally got to see it from the beginning). for lauren, i posted three favorite quotes and two places i’ve traveled.

in august, i made a list of some of my favorite films. i finally watched people like us; elizabeth banks is SO good in this movie. and i watched the way way back. a LOT. best movie i’ve seen this year so far. and amber gave me this compliment:

I think you are a really great writer… You seem to be your own, and that’s important out here in a sea full of cookie-cutter bloggers.

in september, i watched espn’s the book of manning. a lot.

in november, i got all of thanksgiving day off (the two years before this, i had to work both times.. and it sucked. i missed the final quarter of the last lone star showdown! i had to hear about jeff fuller’s touchdown and the longhorns’ stupid field goal on the radio!). danielle, susannah, meredith and melissa gave me some pretty nifty guest posts. i blogged about forty lessons i’ve learned over forty years (the first and the rest).

in december, i got more guest posts; these came from kathryn and erin. after stopping to snap a few shots of the fall foliage, i visited a local winery for a bottle of red and a bottle of white. i finally finished my christmas shopping the other day (and, because i was short, the gentleman in line behind me gave me a twenty dollar bill so that i could get my niece her christmas gift. i about cried).

and today, on twitter, texas monthly called my attention to a story about a remarkable dallas family. it’s a long read. but a great one.

2 responses to “this year’s gifts”