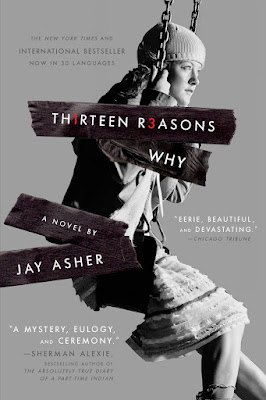 why i wanted to read it: a friend encouraged me to read it.

what i liked: “it’s nothing. a school project.”

why not just pop the tape out of the stereo and throw the entire box of them in the trash?

i swallow hard. tears sting the corner of my eyes.

because it’s hannah’s voice. a voice i thought i’d never hear again. i can’t throw that away (clay, page 16).

so tell me, jessica, which did you mean to do? punch me or scratch me? because it felt like a little bit of both. like you couldn’t really decide… that tiny scar you’ve all seen above my eyebrow, that’s the shape of jessica’s fingernail… which i plucked out myself.

i noticed that scar a few weeks ago. at the party. a tiny flaw on a pretty face. and i told her how cute it was (hannah then clay, page 67).

the next day at school i asked so many people the exact same question, where were you last night? some said they were at home or at a friend’s house. or at the movies. none of your business. but you, tyler, you had the most defensive — and interesting — response of all.

and for some reason, telling me you were nowhere made your eyes twitch and your forehead break into a sweat… hey, at least you’re original. but your presence, tyler, that never left.

after your visits, i twisted my blinds shut every night. i locked out the stars and i never saw lightning again…

why didn’t you leave me alone, tyler? my house. my bedroom. they were supposed to be safe for me (hannah, pages 88-89).

this time, for the first time, i saw the possibilities in giving up. i even found hope in it (hannah, page 126).

i’m listening to someone give up. someone i knew. someone i liked (clay, page 146).

after feeling more and more like an outcast, peer communications was my safe haven at school. whenever i walked into that room, i felt like throwing open my arms and shouting, “olly-olly-oxen-free!”

… for one period each day, you were not allowed to touch me or snicker behind my back no matter what the latest rumor (hannah, pages 153-154).

let me guess. you told your friends to watch while you put the moves on me… and then i hardly responded… when i broke out of my daze, and before i left, i listened in on you and your friends. they were teasing you for not getting that date you assured them was in the bag… you must have a slow boil… taking it more and more personally… and you chose to get back at me in the most childish of ways.

you stole my paper bag notes of encouragement… what tipped me off? it’s simple really. everyone else was getting notes. everyone! and for the most insignificant of things… after my haircut, i waited a week.

nothing… it was time to find out what was going on. so i wrote myself a note… to avoid the major embarrassment of getting caught leaving myself a note, i also wrote a note for the bag next to mine… and the next day? nothing in my bag. the note was gone.

maybe it didn’t seem like a big deal to you… my world was collapsing. i needed those notes. i needed any hope those notes might have offered.

everything they said — everything! — came tinged with annoyance.

then one of the girls… said what everyone else was thinking. “it’s like whoever wrote this note just wants attention. if they were serious, they would have told us who they were.”

… in the past, mrs. bradley had notes dropped in her bag suggesting group discussion on abortion, family violence, cheating — on boyfriends, girlfriends, on tests. no one insisted on knowing who wrote those topics. but for some reason, they refused to have a discussion on suicide without specifics (hannah, pages 171-172).

and that’s why, right at this moment, i feel so much hate. toward myself. i deserve to be on this list. because if i hadn’t been so afraid of everyone else, i might have told hannah that someone cared. and hannah might still be alive (clay, page 181).

i’m not even sure how much of the real clay jensen i got to know over the years. most of what i knew was second-hand information. and that’s why i wanted to know him better. because everything i heard — and i mean everything! — was good.

it was one of those things where, once i noticed it, it couldn’t stop noticing it…

my ears perked up whenever i heard his name. i guess i wanted to hear something — anything — juicy. not because i wanted to spread gossip. i just couldn’t believe someone could be that good.. it became a personal game of mine. how long could i go on hearing nothing but good things about clay jensen?

… clay, honey, your name does not belong on this list… but you need to be here if i’m going to tell my story. to tell it more completely (hannah, pages 198-200).

the air was warm for that type of night, too. my absolute favorite type of weather… pure magic… walking by the houses on my way to the party, it felt like life held so many possibilities. limitless possibilities. and for the first time in a long time, i felt hope (hannah, page 204).

when she first arrived, when she walked through the front door, she caught me off guard. and like a freak, i turned around, ran through the kitchen, and straight out the back.

no, not out of the blue. first i paced around the backyard, cursing myself for being such a scared little boy. then i let myself out through the gate, fully intent on walking home.

but on the sidewalk, i beat myself up some more. then i walked back to the front door. the drunk people greeted me again, and i went straight for you.

… and i agreed, with probably the dumbest smile plastered on my face (hannah, page 208).

what sucked: not a damned thing.