the most recent addition comes from my friend, stephanie.

what is your spirit animal?

okay, first of all… stephanie and i are like complete opposites. when she offered this question, my reaction was to sort of blow her off. i mean…. spirit animal? seriously? and when i told her today that i thought it was kind of a bogus question (fun, yes, but bogus), she scoffed at that and said that everyone has one and blah blah blah… google it, she insisted. so i did.

and the first thing i saw was this: 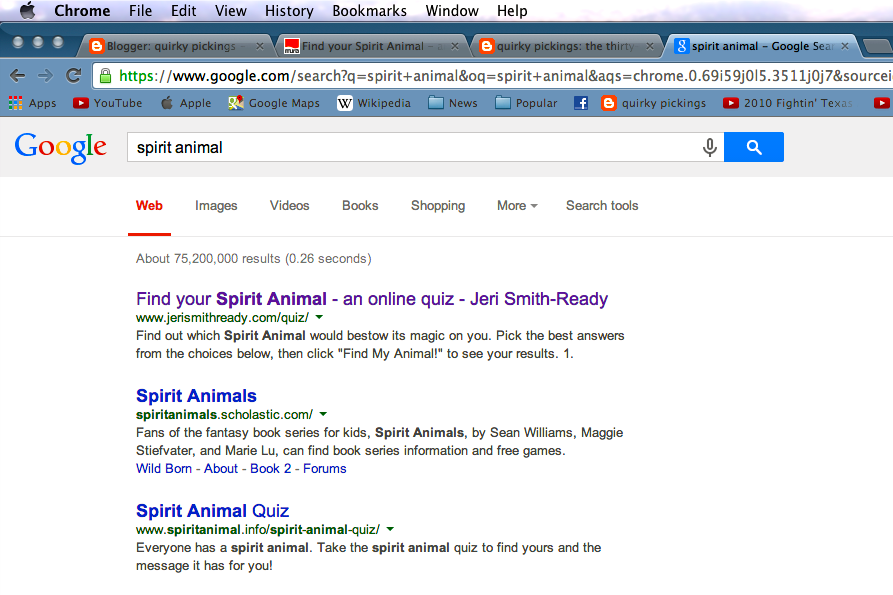 and since i LOVE quizzes (and because when i told her of the existence of such a quiz, her reaction was BAM!), i figured what the hell, why not. 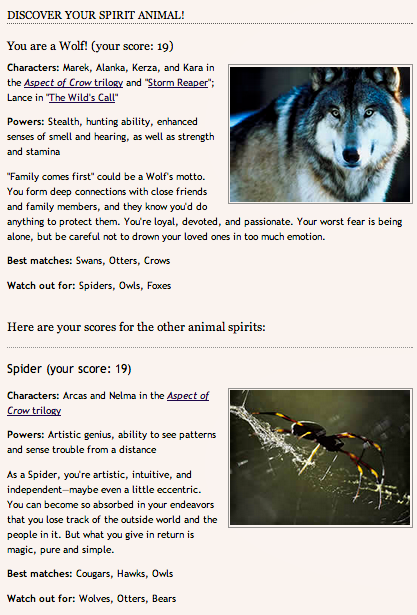 my first reaction was CRAP. why can’t i be something cool like a dolphin. a wolf? they’re alright, i guess. a spider? ABSOLUTELY NOT. and then i read the summaries (and yes, yall, i know not to take it literally…. bogus, but fun, remember?)
it’s just that i am loyal, devoted, passionate. my worst fear IS being alone (because that’s usually when i have the hardest time combatting the crazy). and yeah… i’m capable of smothering. of dumping.
i like the spider’s summary better. on my good days, i’m more like that than the wolf.
the thing i find most interesting is that wolves and spiders should watch out for each other. like they are worst enemies. how ironic.
steph, by the way, is a hawk. according to the site, they are the messengers of the spirits. adept with language, hawks might be writers or teachers (she’s a bartender, studying to go into real estate). their ability to assess situations impartially means that people often seek their guidance before making decisions. brilliant visionaries, they sometimes forget the mundane details of life like eating, sleeping, or paying bills. (the other day, all she’d had to eat was a banana.) she was quite pleased with this result, raising her arms as though flying and making crazy bird noises. and, since she’s a seahawks fan…
anyway. so this was interesting.
find your spirit animal here.