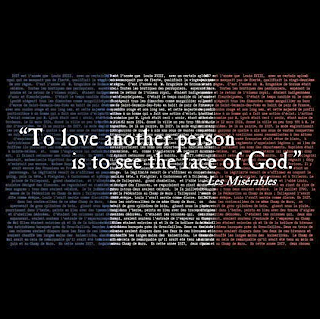 I don’t remember a time when I didn’t love Les Miserables. I grew up singing the songs, learning how to play the music on the piano, and listening to my brothers fight over who got to sing which character’s part (I, of course was ALWAYS both Cosette AND Eponine. No one could take that from me). Our parents even took us to see the musical live while traveling in England while I was still in elementary school.

As I grew up and truly listened to and processed the lyrics in the musical I fell in love with it all the more. What an amazing story of redemption and life change! A man who was left to rot in jail was granted forgiveness by a priest and changed his life around–touching so many around him. As a Christian, I believe that this story is an amazing example of what God does in the lives of those who believe in His sacrifice.

The quote that stands out to me the most comes at the very end, when {lots of spoilers ahead} Valjean is dying. He asks God to forgive his trespasses and bring him into His keeping. As he breathes his last, he sums up his theology in one incredibly deep phrase: “To love another person is to see the face of God.”

You see, he understood that God is love. Period. There is no attribute of God that supersedes His love. He understood that we experience a small part of who God is when we are able to truly love another person. As Valjean lay dying, he knew that he had lived life well because he had been like Jesus Christ in his life sacrifice for his adopted daughter Cosette. He understood God so much more through his care for Fantine in her final days. He displayed God’s love to Javert when he refused to kill him.

It’s amazing that Jean Valjean in Les Miserables can sum up such a key aspect of his (and my) faith in one little sentence. I want to be more like that.

susannah’s one of the kindest bloggers i’ve had the privilege to know. i think yall would like her. go say howdy!