You’ve gotta dance like there’s nobody watching,
love like you’ll never be hurt, sing like there’s nobody listening,
and live like it’s heaven on earth.
William W. Purkey
This quote encourages us to live our lives with fearlessness and joy. Purkey tells us to live life out loud because we only get one shot at it. It’s a beautiful quote, sure, but a dangerous one. You cannot live like this, people. Not unless you want to drive every single other human being out of your life. Let’s break it down.

Okay. I am thirty-six years old. My dancing days are long gone. I’m not talking about slow-dancing with my husband (which we never do) or mild bouncing at a Bon Jovi concert (which I did last month and fucking rocked it). But anything that requires more than the bare minimum amount of movement is out the window. I will not dance like there’s nobody watching unless there is truly nobody watching. Because I’m standing in my closet. With the music down. And the lights off. And the mirrors covered like I’m sitting shiva for my youth.

Let me tell you a little something I’ve learned about life. Painful experiences happen for a reason; they are lessons you should grow from. Romantic relationships in particular are rife with these lessons. If you are in a relationship, and you get hurt, and then you get into another relationship and pretend that the bad stuff in the first one never happened, then you are an idiot. You are also crazy. You are a crazy idiot. Loving like you’ll never be hurt means telling someone you think that you’d have cute kids together on the second date. Loving like you’ll never be hurt means calling and e-mailing multiple times a day because you “miss them.” Loving like you’ll never be hurt means assuming a future with someone who is now terrified of you. None of that shit is cute. You have to love despite having been hurt and despite the fact that you may very well be hurt again. THAT takes courage. SHAZAM, PURKEY! Point: Bland. 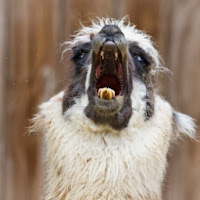 Lord have mercy. Have you heard how people sing even when they know very well that there are lots of people listening? Save it for the shower, Pavarotti. It’s called caring about your audience. If you’re singing like crap without caring about who’s around you, it’s either because you think you’re really good which just makes everyone uncomfortable or because you don’t give a shit what other people think which means you probably also belch at restaurants and take off your bra at the office. Either way, you’re not making any friends.

No. Don’t be this guy. This is the guy that says, “Oh, come on. It’s not all bad! You still have a whole other leg!” Sometimes life sucks, and that’s okay. Deal with it. Revel in it. Go eat a carton of Haagen-Daaz and come back stronger than before. The only way to really enjoy the good stuff is to go through the bad stuff, right? And the only way to make a real friend is to tell them about the time you got humiliated by that boy or when you sharted at a PTA meeting. Because that’s what makes us relatable and human.

So, thank you for the lovely quote, Purkey. It’s uplifting and inspiring as long as you don’t think about it too hard. But let’s never forget that some of us are terrible dancers, that there are times when bursting into song is not appropriate, that you are going to get your heart broken, and that sometimes life is a big ol’ bag of turds. Flaming turds. From a dog who has been fed cheese.

What’s important is being happy despite knowing that flaming dog cheese turds are out there. THAT’S the trick.

And that is my quote.

this fantastic contribution to the collection was brought to you by the insightful and witty meredith bland who posts at pile of babies. you need her humor in your life. you really, really do.

2 responses to “the quotes collective: meredith”