Skip to content
why i wanted to read it: because in fifth or sixth grade, we watched the film version, and i remember liking it a lot. ever since i watched it, i wanted to read it but never got around to it.
that’s the whole movie, boys and girls. just so you know.

what i liked: “here in digitopolis, we have our meals when we’re full and eat until we’re hungry. that way, when you don’t have anything at all, you have more than enough. it’s a very economical system. you must have been quite stuffed to have eaten so much.”

“quite correct,” he nodded. “now suppose you had something and added nothing to it. what would you have?”

“the same,” he answered again, without much conviction.

“splendid,” cried the dodecahedron. “and suppose you had something and added less than nothing to it. what you would have then?”

“FAMINE!” roared the anguished humbug, who suddenly realized that that was exactly what he’d eaten twenty-three bowls of.

“it’s not as bad as all that,” said the dodecahedron from his most sympathetic face. “In a few hours you’ll be nice and full again–just in time for dinner.” 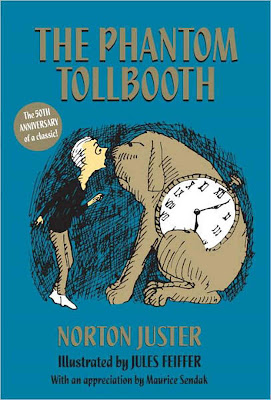 “oh dear,” said milo sadly and softly. “i only eat when i’m hungry.”

“what a curious idea,” said the mathemegician, raising his staff over his head and scrubbing the rubber end back and forth several times on the ceiling. “the next thing you’ll have us believe is that you only sleep when you’re tired. (pp. 186-7).

“you’ll find,” [the mathemagician] remarked gently, “that the only thing you can do easily is be wrong, and that’s hardly worth the effort. (p. 198).

what sucked: it can be pretty ridiculous, and i couldn’t help but wonder, throughout my reading of it, what illicit substances the author might have ingested to influence the crafting of this tale… but then maybe i should’ve read when i was younger.

having said all that: i’m not too keen on it.