like erin, i attended oak ridge high school. i was a nerd: overly intellectual, obsessive and horribly, HORRIBLY lacking in social skills. i was the scrawniest (sixty-eight pounds, dressing in either a child’s sixteen x or a junior’s size zero), shortest (five foot one) and most developmentally delayed (flat-chest, straight hips, and yes, BRACES… still) in the freshman class (three hundred twenty-one students). by the time we’d reached senior year, i believe our class size had dwindled to two hundred forty. the mascot was the war eagle. the school colors were red, white and blue. 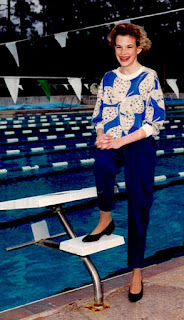 the most popular tunes of the year i began high school included: the bangles’ walk like an egyptian, heart’s alone, whitney houston’s i wanna dance with somebody, starship’s nothing’s gonna stop us now, whitesnake’s here i go again, bon jovi’s livin’ on a prayer and u2’s with or without you. films released that year were: the princess bride, dirty dancing, full metal jacket, the untouchables, fatal attraction, less than zero, lethal weapon, good morning vietnam and the lost boys. among the new york times bestsellers were the tommyknockers and misery by stephen king, presumed innocent by scott turow and patriot games by tom clancy.

i was binging on def leppard, van halen and u2, dirty dancing and the sweet valley high series. and, of course, star wars.

my extracurricular activities included art club and swim team. in swim practice, i never used a cap because i hated wearing the things and my hair was short enough that i could do without it. my hair, which was black at the roots, then brown, then orange, then blonde and finally green at the tips from the chlorine. so there’s my freshman swim team photo. with the hair and the braces and the hose that are too dark because i’m welsh and english and can’t tan worth a damn, and i hated wearing flats without hose because i was also a prude. my father was the school superintendent, and i was a new kid at school. i had no chance whatsover of forging any kind of friendships. at this point in my life, i’d been suicidal for six years. i took my rage out on the water.

if i wasn’t swimming, i was walking or riding my bicycle around my neighborhood or in my room listening to music or watching movies on the television. i didn’t get out much. i didn’t want to. this was steady behavior all four years.

sophomore year i didn’t get to swim much because my younger brother broke my collar bone while playing football a few weeks before school’d begun. this photo was taken by the district’s communications director as she made her rounds to campuses one day. if you look close, you can see the sling.

i retired from swimming at the conclusion of my junior year. we’d gotten a new coach, whom i didn’t like. and i’d been competing since i was ten. i was exhausted. i think i’d cut art club at the end of my sophomore year.

i’ve vision troubles and was terrified of driving. i didn’t get my license until after i’d graduated. i road the bus all four years.

the only pictures i liked of me were the ones my mother insisted upon when i turned sixteen and my senior photos.

the most popular songs the year i graduated were bryan adams’ (everything i do) i do it for you, c and c music factory’s gonna make you sweat (everybody dance now), emf’s unbelievable, damn yankees’ high enough, jesus jones’ right here, right now, janet jackson’s love will never do (without you) and good vibrations by “marky mark” wahlberg. films: terminator two: judgement day, the silence of the lambs, robin hood: prince of thieves, point break, thelma and louise, fried green tomatoes, drop dead fred, sleeping with the enemy, my girl and curly sue (this would be the one in which this year’s winner of the voice starred). the new york times bestsellers included plains of passage by jean auel, heartbeat by danielle steel, heir to the empire by timothy zahn (that’s star wars, in case you didn’t know), the sum of all fears by tom clancy and scarlett by alexandra ripley.

i was binging on queensryche and nelson, the two terminator films, robin hood: prince of thieves and drop dead fred (LOVE that movie) and thomas harris and judith mcnaught novels. and star wars. still. always and forever.

i don’t have good memories from then. i was pretty much focused on not dying. that took quite a bit of my energy. favorite teachers were the ones who taught english and history because they showed me kindness, and they didn’t expect me to be awesome just because my dad was. they weren’t intimidated by him, by my being in their classrooms.

to the nerd entering high school, i’d say don’t let your peers define you. don’t let them determine your worth. don’t blow off your assignments just because they’re easy and you think they’re pointless. if you’re smart enough to be an a student, BE AN A STUDENT. i could’ve been in the top five percent of my class. instead i was at the bottom of the first third. why? because i didn’t do my homework.

to the nerds who have graduated high school, those punks who picked on you? they don’t outgrow that shit. if you were like me and battled depression with delusions that as adults your peers would be kinder to you, it doesn’t work that way. i waited almost three decades to use my voice because i thought no one would want to listen. i waited for the days to get better… and i wasted decades doing that. i beseech you… don’t make that mistake.

go on with your overly intellectual, obsessive, socially inept selves.

audrey louise blogged about this. go on over to her page and say howdy.