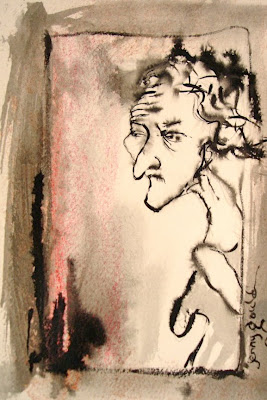 the benefit of carrying around all this baggage is that sometimes i find things inside that i’d neglected to notice i’d packed for the journey.

today, i woke up at ten, shoved the ugly memories of yesterday’s unpleasantness aside, texted my stylist to see what time my pedicure appointment was, texted my trainer to see if could come in today for a refresher course which i badly need (he didn’t reply, and i’m thinking it’s because i stood him up a couple of weeks ago), snuggled back in bed and watched an episode of law and order: special victims unit, played on the computer, got my pedicure, got lunch, filled the prescriptions for the sinus infection diagnosed last thursday.

spent an hour and a half at my younger brother’s house. my nephew’s walking. short journeys. you park the boy on his feet near your knees and he runs headlong into your chest with his arms outstretched. we’re working on balance and control.

most of the time when i’m in my younger brother’s presence, i feel small. spinsterly. here’s my baby brother, gainfully employed, making twice as much money as i do, well-respected by his coworkers and management team, residing in his own home, happily married with two beautiful babies and a close, comfortable circle of friends who enjoy his company. he is thriving. he is the epitome of this. to top it all off, he’s as intelligent as i am, but he’s also emotionally and socially stable.

he has everything i wanted for myself. and i constantly feel as though i’m a disappointment to him. he used to be proud of me. he used to marvel at my strength.

i was driving home from his place to have dinner with my mother when i had another epiphany.

a decade or so ago, in my last year of college and the year or two that followed, my older brother was living in houston. my parents would travel a lot more because their children had become adults and they trusted us to fend for ourselves.

on top of all the baggage i carry, i’m phobic of several things. one of them, typically, is being home alone. if i’m lucky enough to sleep at night, it’s with all the lights in the house burning. my older brother had some idea of this fear i had, though he couldn’t understand it.

i used to think he did this because he wanted his own home, but couldn’t afford it, so he borrowed my parents’ in their absence.

today, as i was driving home, it occurred to me that maybe he had that uncanny knack because he didn’t want me to be home alone.

when i spoke of this to my mother, when i mentioned how irritated he was with me and my reaction when bad things happened at the house, that i’d thought of his visits as more of a hindrance and made my opinion obvious to him, she thought maybe his irritation was because he’d failed to help, to support me.

and i see now how he might’ve felt as though he was a disappointment to me.

i used to be proud of him. i used to marvel at his strength.

i can’t fix that. but it’s nice to think that maybe he’d meant well.