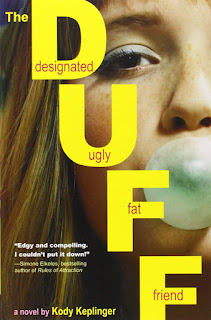 why i wanted to read it: because i liked the movie well enough.

what i liked: “spanish, huh?” he said, glancing down at the scattered papers as he grabbed them. “can you say anything interesting?”

“el tono de tu voz hace que quiera estrangularme.” i stood up and waited for him to hand over my papers.

“that sounds sexy,” he said, getting to his feet and handing me the stack of spanish work he’d swept together. “what’s it mean?”

“the sound of your voice makes me want to strangle myself.”

“what you are is an intelligent, sassy, sarcastic, cynical, neurotic, loyal, compassionate girl” (page 175).

“i haven’t been avoiding you.”

“don’t lie,” wesley said. “you’ve been doing everything you can to stay away from me. you won’t even look at me in class, and you practically sprint down the hallway if you see me coming. even when you hated me, you didn’t act like that. you might threaten to stab me, but you never –“

“i still hate you,” i snarled up at him. “you’re infuriating. you act like i owe you an apology. i’m sorry i made you worry, wesley, but i just can’t be around you anymore. you helped me escape from my problems for a while, and i appreciate that, but i have to face reality. i can’t keep running away.”

“but that is exactly what you’re doing right now,” wesley hissed. “you’re running away.”

“don’t pretend, bianca,” he said. “you’re smarter than that, and so am i. i finally figured out what you meant when you left. you said you were like hester. i get it now. the first time you came to my house, when we wrote that paper, you said hester was trying to escape. but everything caught up with hester in the end, didn’t it? well, something finally caught up with you, but you’re just running away again…”

“i didn’t mean anything to you,” i told him.

i discovered wuthering heights doesn’t have a happy ending. because of stupid, spoiled, selfish cathy (yeah, i have no room to talk, but still), everyone winds up miserable. her choice ruins the lives of the people she cares most about. because she picked propriety over passion. head over heart. linton over heathcliff (page 252).

what sucked: i don’t think i can say anything sucked.

having said that: it’s pretty typical teen fiction and differs quite a bit from the movie, but i actually liked the book more. having seen the film first, i was hearing mae whitman and robbie amell voice the characters. it’s heavy on wish fulfillment, just like the movie, but then, most love stories are, so… i liked it. it’s cheesy but cute and reads fast.