the beginning of everything 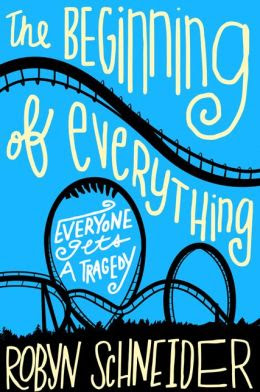 why i wanted to read it: because i liked the title and the cover and the first few pages grabbed my attention. but it, like so many books, made it home and then was untouched for quite some time. i picked it up again for the book beginning with b category in erin’s book challenge.

what i liked: so who was i in the aftermath of my personal tragedy? at first, i was a lousy sport when it came to the chipper attitudes of the pediatrics nurses. and then i was a stranger in my own home, a temporary occupant of the downstairs guest room. an invalid, if you will, which is probably the most horrific word i’ve ever heard to describe someone who is supposed to be recuperating. in the context of a mathematical proof, if something is considered “invalid”, it has been demonstrated through irrefutable logic not to exist (page 13).

we wound up debating the merits of free market economics, which definitely wasn’t my strong suit, and i argued pro again. i thought i’d managed to present the argument okay, but the moment that freshman adjusted his belt, straightened his tie, and shot me a look like he expected me to suck it, i knew i was done for. he filleted me.

it was so frustrating, knowing that, if we were on a tennis court, i could’ve killed him with my backhand, slicing it to land short and watching him run like hell. but this was debate, and my superpowers were nonexistent. i almost wished he’d debated cassidy in her ridiculous harry potter costume, so she could’ve wiped the smirk off his muggle-face (pages 146-147).

“the world tends toward chaos, you know,” cassidy said. “i’m just helping it along. you could too. just write down a made-up name, or even a fictional character…”

“fictional people?” i teased… “i think i’ll stick with reality,” i said, handing cassidy back her phone… “imaginary prisoners are still prisoners” (pages 175-176).

she’d put on a pair of boots with big heels, and the extra height made holding hands feel different, as though she was closer, and easier to reach (page 194).

“just once i want someone to be afraid of losing me,” phoebe said (page 221).

she cocked her head slightly, her hand on her hip, as though it pained her to have to explain it to me.

“how could it have been you? my god, ezra, look at yourself. you’re a washed-up prom king who lost his virginity to some cheerleader in a hot tub. you take me out for burgers and friday-night movies at the multiplex. you’re everything i make fun of about small hick towns like this one, and you’re still going to be here in twenty years, coaching the high-school tennis team so you can relive your glory days.”

back when they’d reset the broken bone in my wrist, i’d woken up on the operating table. it was just for a moment, before the doctors upped the anesthesia, but in those seconds when the lights were bright and hot and the surgeons were bent over me with my blood dripping from their scalpels, it’d felt as though i’d woken into a nightmare.

hearing cassidy say those things was worse. because i hadn’t been broken when i left my house an hour earlier, with a wrist corsage of white roses still cold from the refrigerator, but i was certainly broken now.

i stared at her, horrified. her chin jutted stubbornly and her eyes were a hurricane, and there was nowhere for me to seek cover

i turned and walked away.

“ezra!” she called desperately, as thought i was the one who was being unreasonable.

i paused, considering it, but what more was there to say? and then i continued my funeral march toward the parking lot.

“remember my twelfth birthday… how all of the sudden, we weren’t friends anymore… you’re pushing me away, exactly like you did in seventh grade… i was the fat kid who drew comic books. i was going to be bullied no matter what. you act like that day at disneyland was my big tragedy, but you’re the one who lost your best friend” (pages 269-270).

what sucked: the writing is mediocre, at best. most of the time, it was disheartening for me to read this book because i felt my own writing was equal to this, and i want to do better and am not sure i can… which made me feel like shit, because it’s really not good writing. too much telling, bad dialogue, poor character development… it doesn’t read quickly enough for my liking. it’s fairly predictable. there’s not much more heart than what’s in these passages here. he break-up scene is barely a page. that should be gut-wrenching, and surely what’s there has some power, but… the author always seems to fall a little short. not much heart, and much less chemistry.

having said that: the bones of the story are good. there’s some amazing conflict here, and the author does do well in creating a believable world in which these characters live. although i’m not fond of the writing style, i cared enough about ezra’s plight to see it through to the end.