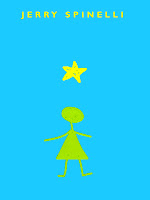 why i wanted to read it: a girl i met at the bookstore yesterday recommended it.

suddenly, intensely, i wanted to know everything about her. i wanted to see her baby pictures. i wanted to watch her eating breakfast, wrapping a gift, sleeping. since september, she had been a performer–unique and outrageous–on the high school stage. she was the opposite of cool; she held nothing back. from her decorated desk to her oratorical speech to her performance on the football field, she was there for all to see. and yet now i felt i had not been paying attention. i felt i had missed something, something important (p. 78).

she was bendable light: she shone around every corner of my day.

i walked in a gray world of nothings.

so she would stop and point out that the front door of the house we were passing was blue. and that the last time we had passed it, it had been green…

after a while i began to see better. when she said, “look!” and i followed her pointing finger, i saw. eventually it became a contest: who would see first? when i finally did it–said “look!” and pointed and tugged her sleeve–i was as proud as a first grader with a star on his paper (p. 108).

“do you realize how much you must throw away in a year,” i said.

and just like that, stargirl was gone… she turned around slowly for my open-mouthed, dumbstruck inspection. nothing goofy, nothing different i could see. she looked magnificently, wonderfully, gloriously ordinary (pp. 139-140).

“gave up herself for a while there, she loved you that much. what an incredibly lucky kid you were.”

he shook his head with a wistful sadness. “no, you don’t. you can’t know yet. maybe someday…”

i knew he was tempted to say more. probably to tell me how stupid i was, how cowardly, that i blew the best chance i would ever have. but his smile returned, and his eyes were tender again, and nothing harsher than cherry smoke came out of his mouth (178).

what sucked: at times it borders on ridiculous. but then that could be because i don’t often embrace oddity.

having said all that: it’s a very quick read, and parts of the story are really quite good. i’d folded down the corners of quite a few pages so that i could share with you the quotes that resonated for whatever reason. and i think perhaps it’s the kind of story, on the whole, that will resonate for some time.