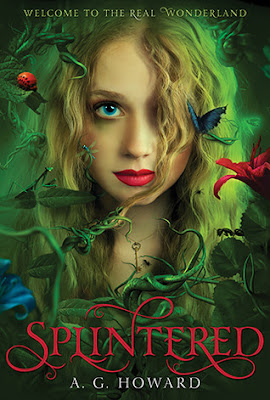 why i wanted to read it: because one of the categories for erin’s book challenge is a novel with an animal on the cover. this one’s got bugs and butterflies on it. also at a writer’s conference last year, i met a woman who, if memory serves, had something to do with the cover design and liked her.

it’s important to note that the book is a spin of alice’s adventures in wonderland, and i’ve never liked that story. so i was not as eager to read this as i have been for other selections.

what i liked: he jerks his gaze back to the dashboard. “if you hadn’t been ignoring my calls, i could’ve already taken a look at your engine. you shouldn’t drive this until it’s fixed.”

“this isn’t a joke. what are you going to do if you get stalled out in the middle of nowhere?”

i twirl a strand of hair around my finger. “hmm. show some cleavage to a passing trucker?”

i giggle. “oh, come on. i’m kidding. all it would really take is a little leg.”

his lips curve slightly, but the smile is gone in a blink. “this from the girl who’s never even had a first kiss.”

he’s always teased that i’m a mix between skate glam and american sweetheart. looks like i’ve just been downgraded to prude.

i groan. it won’t do any good to deny it. “fine. i would call someone on my cell and wait safely in my car with all the doors locked and mace in hand until help arrived. there, do i get a cookie?” (pages 24-25).

“how adorable,” i mock. “taelor gave you lip jewelry… and it’s sparkly.”

he nudges the piercing with his tongue. “she’s trying to be diplomatic.”

anger rises in a white-hot surge as i remember london and all the things taelor said to me. “of course she is. because she’s eight kinds of wonderful, and that’s just her legs.”

jeb furrows his brow. “what’s that supposed to mean?”

“taelor has all the diplomacy of a black widow spider. garnet’s her birthstone. you’re wearing her birthday on your lip. talk about spinning you up in her web.” … i turn around, but he follows me into the entryway. rounding on him before he can cross into the living room, i fold my arms over my bustier, trying to subdue the urge to punch him. “you can’t come in without an invitation.”

he leans a shoulder against alison’s framed photo of a wheat field at harvest. “that so?” his boot heel nudges the door behind him, shutting out the storm and the scent of rain. “last i checked, i wasn’t a vampire,” he says, his voice low.

my fists clench tighter, and i step backward onto the line of carpet that borders the edge of the living room. “you sure have a lot in common with one.”

perched on my hands and knees at the hole’s edge, i have a moment of doubt. i weigh a lot more than a piece of plastic and some batteries. maybe i should push in a few heavy rocks, just to be sure.

the shout from behind me makes me scramble. dirt gives way beneath my hands. screaming, i clutch at empty air and tumble in.

inside, the hole widens. more like a feather on a breeze than a skydiver, i float, my position shifting from vertical to horizontal. my stomach quivers, trying to adjust to weightlessness.

overhead, someone dives in after me.

in seconds, he latches onto my wrist and tugs to align our bodies.

his arms lock us together, his gaze intent on the slowly passing scenery. “sweet mother of–“

“stuff and nonsense,” i interrupt with a quote from the original wonderland book. “how are you here?”

“where is here?” he asks, mesmerized by our surroundings… after a few minutes, jeb eases us an arm’s length apart and stars at me — into me.

“how?” i whisper, still unable to grasp that he’s here.

he pales, shaking his head. “i… i slipped on the porch in the rain. that has to be it. yeah, that’s why i’m wet. i’m dreaming this now. but…” he presses our foreheads together and i make a mental note of every other place our bodies touch. his hands glide up my rib cage before stopping on either side of my face. “you feel real,” he whispers, his hot breath mingling with mine. every point of contact between us heats to white flame. “and you’re so pretty.”

okay, that’s proof he’s delusional and in shock. first off, he’s never said anything like that to me. second, my makeup has to look like soggy newspapers by now (pages 93-94).

“find your courage. look down. your show is about to begin.”

i shake my head, eyes clamped tightly. “we’re too high… it makes my stomach kick.”

he laughs and inhales a puff off the hookah then blows the smoke over me, saturating me in the comforting scent. “that’s how you know you’re alive, alyssa. the kicks” (page 174).

and the ending — not the climax but the crap that comes after — is lame. really, really lame. utterly redonkulus.

having said that: it’s clever and engaging, even when the writing’s shit. and i liked its story MUCH more than i liked alice’s adventures in wonderland. i like alyssa and jeb and morpheus. i don’t like them or the story well enough to read any of the others.