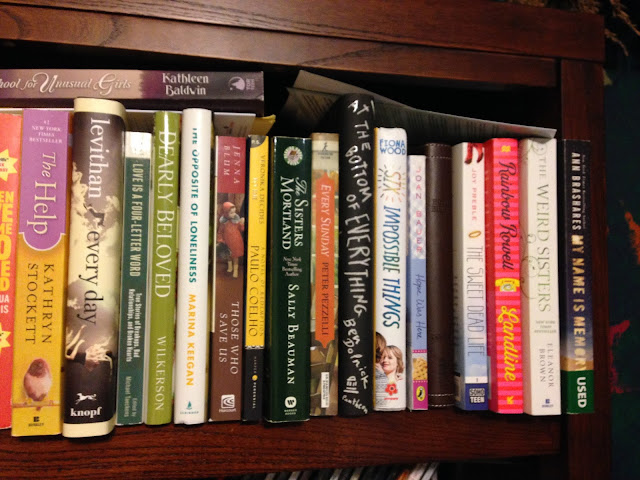 so yeah. these are just a few of the dozens of books i’ve purchased or, as is the case with the help and dearly beloved, been given in the past decade or so that i’ve been meaning to read. that pink one third from the right? landline? i’ve read that one at least a dozen times. i’m obsessed with that one. like OBSESSED. if there were only one book i could read for the rest of my life, that one’s on a VERY short list of titles from which i would choose. the one two doors down from that one? the brown leather one? that should probably be the ONLY one on that list. that’s the bible, yall. and shock of all shocks, i’ve read some of it. like i’ve read a few pages in most of the books on this shelf. (there’s two more rows of books behind that one… just so you know. i’ve read a few pages in a few of them, too.)

two doors down from that bible is a young adult novel i picked up a few years ago… another selection for erin’s book challenge that, also shocking, i have yet to finish. it’s called six impossible things.

i see it every morning when i wake and every night before i sleep. i see it and remember that quote of the queen’s in alice and wonderland. most of the time i look at those words and see shortcomings because all too often, i can’t even find the courage or the strength or the passion to strive to believe in one thing. shortcomings because i can think of six impossible things with such ease. IMPOSSIBLE THINGS like looking in the mirror and not feeling about my face today like i did when i was thirteen. sure, the face staring back at me is different. but the girl’s the same. the girl knows that the reason the face is different is because surgeons had to make it so. HAD to or her teachers would continue to treat her as though she belonged in a special education environment rather than a mainstream classroom. had to or she probably would’ve died not long after. i can tell you all about impossible things.

i was gonna make a list of the worst of those things, the ones that i needed to believe i could overcome. and then it occurred to me, that’s just enabling the ugliness.

so let me tell you instead of some other, more uplifting impossible things i’ve known.

one. the love my parents have for me. i don’t make it easy, yall. i’ve not made it easy for them since birth, practically. they’ve had to fight harder for me than i’ve ever fought for myself. they’d do it with their dying breaths. i’ve said before how easy it would be for my mother to tell you of the flaws of her children… but she sees such goodness in us, in each of us, no matter how uncouthly and idiotically we may behave… my brother drank himself to death. my other brother was unfaithful to his wife. and i’ve relied so heavily on their financial assistance for so long that they can’t provide for their grandchildren’s college education like i’m sure they’d hoped to do. we are gifted in so many ways, and not all of them are good. but when i’m despaired and drowning because of it, when there is no light in me and i ask her why she loves me, she holds on and says it’s because i bring her joy and there is such goodness in me… that they could love me despite how ugly i can be to them, how frequently i take advantage of them… that their love for me can be so boundless seems so impossible to me, and yet, there it is. and i know it to be true.

two. the worst years of my academic studies were from fifth to seventh grade, and right smack dab in the middle of them was this wonderful teacher named pauline elliott. during this time of my life i was convinced death was the best way my story could possibly end. i’ve never prayed so hard in my life as i did then, and my prayers, they were not good. they lacked any gratitude or praise, any hope or faith, any kind of light. my pysche was similarly constructed. and one day, this woman pulled me aside after class and said i had a talent for writing. that one compliment… to this day it makes me cry recalling it because of the kindness she showed me, because of the good she saw in me when so many saw such ruin, such waste. i’m sure i’ve blogged about this before, but that compliment could not have come at a more crucial time in my life. it was just the right thing to say, at just the right time… and it seemed so impossible to me that any teacher could care for me because they had not done so in years… and yet… there. she did. she’s gone now. she died this year. i don’t think i ever told her how valuable her words were to me. they were like hope in pandora’s box. i walked into that school every day and heard every hideous thing you could imagine… and there in all that ugliness, was that one shining sentiment.

three. the worst year of my adult life was from spring to spring ‘two to ‘three, and right smack dab in the middle of that was this wonderful professor named janevelyn tillery. i was in the throes of some pretty impressive depression when i met this woman. i’d enrolled in one of her linguistics courses at the university of texas at san antonio. i’d had my heart broken just a few months before. i’d quit my job and spent the majority of my summer holed up in my apartment, rarely bothering to change out of my pajamas and the only time i’d left the house was to buy cigarettes and food. somehow, by august, i’d decided i need to do something with myself, so i enrolled in english classes and hid out in academia. toward the end of the semester, tillery had asked her students to fill out index cards detailing the classes we were taking in the spring. i loved how invested she was in her students, in their education and aspirations. i didn’t fill out a card because i wasn’t going to be taking classes next semester. she noticed that i’d not submitted one, and when class had concluded she confronted me about it. when i’d said i wasn’t enrolling for spring classes, she looked shocked and sad. she said, but you’re so bright! you should be in school! i almost cried right there. not because i couldn’t be in school, but because here, yet again, impossibly, someone saw good in me when i could not see it in myself. someone outside my family loved me when i felt so horribly unlovable.

four. i can laugh. a few months ago when we were at the monastery, my brother’s friend adam remarked at how it pleased him when i’d laugh one of those full belly laughs. i think it surprises people when i do. i am so serious, so guarded, so besieged on so many fronts by so many things that laughter is as foreign to me as the french tube system. there are times when i think there’s no way i could manage laughter while feeling like i do, and then… there it is. someone, something will strike just the right chord…

five. getting up out of bed every morning. often before i go to bed, i think, there’s another day like today just around the corner. and even though i’ve gotten through thousands of those days… getting up out of bed each morning, planting my feet and putting one before the other again and again… that i have the energy, the capability to get through it astounds me.

six. i can sing and write and speak my mind. because i’m convinced i should’ve lost my voice decades ago, and yet, here it is…

by the way… at some point, i’ll get all those books read.