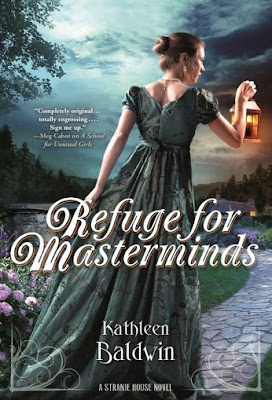 why i wanted to read it: because it’s the last of the school for unusual girls trilogy by kathleen baldwin. i wanted to know how the story ends.

what i liked: “save your lectures, lady jane… no one will think you are a tavern wench… one look at you puts that idea to rest once and for all. there is nothing about you nearly so comfortable or amiable as a tavern wench” (page 25).

upon returning to the cove, i stand awaiting the next bit of the prototype to be ferried to the barn. alexander stops work and peers at me. “you are near dead on your feet, lady jane. take yourself off to bed. it won’t do to have you collapsing in a heap.” his voice echoes weirdly in the cove, and just when i think he is expressing genuine concern, he goes and spoils it all. “we’ve too much to do to be carrying you up the hill, as well.”

still stunned, i stand, unable to move, softened into a useless pudding by the merest touch of his lips to mine. at the same time, his cryptic remark bewilders me. i try to puzzle it out. does he mean kissing me would’ve been an ordeal? surely not. he hadn’t come toward my mouth like a man about to suffer pain for the cause. is it possible he meant our kiss would devastate him more than it did me? why would he think such a thing? perhaps it saddens him that this first kiss will also be our last, our only kiss. i shake my head, unable to fathom a sentiment like that coming from him, the glib mr. sinclair — i think not. not him. more than likely, it was another of his meaningless jests.

i am vexed now. quite vexed…

alexander turns me around, so i am facing the right direction on the path, and with a steadying hand he guides me upward. it is completely unnecessary. i am quite capable of stomping my way to the summit on my own (page 73).

“all right, lady jane, what are you up to?” he stares down his nose at me… “i see cogs turning in that dangerous little head of yours.”

dangerous. not pretty. of all the things he could’ve called my head, lovely, or even clever, he chooses dangerous. what’s worse, i am completely innocent of plotting at the moment. i was merely enjoying looking at him.

“because you always are.” he says this with a modicum of respect, as if it is not entirely an insult, even though it is. “craftier than a mongoose chasing a cobra, you are. i never know what to expect.”

suddenly, i want to punch him. my fists are balled and i have half a mind to actually do the deed, except that would not be ladylike, and fortunately for him captain grey and miss stranje are approaching… mongoose, indeed….

“i’m surprised you would trust a mongoose.”

“with my life, your majesty.” he adds a jaunty smile. but his flippant remark, with my life, jolts me back to the cold cruel fact that his life may indeed rely on whether or not i can catch the cobra.

meanwhile, georgiana and lord wyatt, tess and lord ravencross, and i, are doing our utmost to teach mr. sinclair, the most obstinate man on earth, steps to a simple country dance…

“that is not it at all.” i stop and gesture vehemently at mr. sinclair’s long lanky legs. “your knees must rise higher. like this.”

“what do you mean?” he waves his hands at my gown. “i can’t see a thing. your skirts are in the way.”

i raise them, so he can see how to do a proper twirl and hop.

he shakes his head. “still can’t see it. do it again.”

i repeat the step, but this time lord wyatt sputters into a guffaw. i whirl around and see alexander, the scoundrel, grinning and indicating i should lift my skirts even higher.

what sucked: it lagged at times. that’s really all i’ve got.

having said that: it’s alright. i liked jane and alexander. i wish baldwin had included more interaction between the two of them. it’s better than the second but not as good as the first. i think it would’ve been better if baldwin had made it one book instead of three. overall, it’s an interesting trilogy, though, and i did enjoy it.