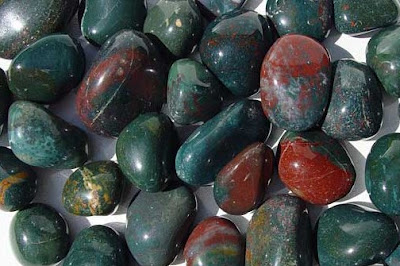 two. today, i sold approximately thirty-five hundred dollars in pottery barn kids’ merchandise, suckered three customers into registering for a pbk charge card, set up two registries and an estimate and created three client profiles so that an associate or i could call a customer up at a future date and haggle them until they’ve felt the inclination to either spend more money or say to hell with this shit.

three. that i had such a good day at work (i sold more stuff than any of my coworkers … this has never happened before) came as a shock to me, because i was horribly unhappy this morning, so much so that i was certain i was going to have a lousy day. but my first customer? she was my first credit card sale. so i guess i should’ve known it would be alright.

five. i love bloodstone, also known as jasper. sometimes i wish that were my month’s major birthstone rather than its minor one. not that i don’t like aquamarine. i do. but you can’t confuse bloodstone with any other stone, really. and the aquamarine is so similar to blue topaz. and if i’ve not cleaned my ring in a while, it starts to look more like a dingy bluish gray, which has been confused for a diamond before (although i marvel at the stupidity of those who have thought it such).

six. i am closer to one-forty than one-fifty, which of course has deceived me into thinking, since my pants size is smaller, that my waist is smaller and therefore, my dress size should be smaller. i actually stepped foot in forever twenty-one today with the intent of buying a dress i’d seen a week or so ago that i’d learned was fairly new, so i thought maybe i might be able to snag one for myself.

seven. i tend to avoid shops like forever twenty-one on principle, by the way. too much product, too big a store, too much in the now. and when the line to try on clothes is as long as this store’s was today, i feel a little bit repulsed.

eight. anyway, the dress was already sold out. i was not thrilled to learn of this.

nine. while i might have lost a bit of weight, i still look like a fat cow in a dressing room mirror under its bad lighting. i’m not sure why dressing rooms have to present such unflattering angles and whatnot. i would think the idea was to get people to buy the attire rather than leave a store empty-handed.

ten. i’m so not the girly girl. one of my bloggy friends commented on twitter a while back that she’d like it if the undergrad students would dress better. i’d remarked that she’d hate the way i dressed. and she would. some days, i don’t much care for the way i dress. i’ve never had a figure i’ve felt inclined to show off. i’m all arms and legs (and hips … good god, the hips … thanks, mom. thanks mema). anyway. you would think being leggy would be a good thing. when i was younger, i was mocked because my pants were too short. those jeans that are long enough that you can roll’m at the ankles so that the cuffs are resting on your shoes? i’ve never been able to do that with a pair of jeans. ever. i like the way it looks. i like the bagginess of it. the ease it implies. the best i can do is turn a pair of jeans into capris by rolling them up twice. and i don’t like it when the sleeves of a shirt don’t reach my wrists. anyway, i’ll see an outfit, a haircut … a sense of style i admire, and i’ll want that for myself. i’ll be inspired to go shopping and dress better …

twelve. i’ve never really thought i was anything like my maternal grandmother. but as i get older, i’m starting to see significant similarities. i’m not sure what she’d say to that. i don’t imagine it would be good, though. in fact, i can see her scoffing at that and laughing at me. i never really felt as though she thought too much of me. i’m not sure she ever really understood me.

thirteen. but then, i don’t think anybody understands me.

fourteen. i’ve been stuck on the script’s for the first time. i am unthrilled by this. very much so. somebody please, please put some good music in my noggin.

fifteen. i want a dog. i know. i’ve mentioned this before. i want seven of’m. but right this second i feel a keen desire to have a big, red french mastiff. those are the best dogs ever.

sixteen. i wish i could create a story as easily as i could create a character. and then yall could be reading about isa and gus and piper and cate in a book rather than in snippets off this here bloggy. but i can’t see their stories. i can only see them. and it’s only for a second or two at a time. it’s really irritating me.

seventeen. i’ve become addicted to that game angry birds. so happy my niece and nephew introduced me to it. i spent a significant period of time in baltimore’s airport monday afternoon slinging cardinals, blue birds and canaries at green piggies. missing mostly. i’m sure the wonder twins would’ve gotten a lot more hits than i did.

eighteen. the medicine i’ve been prescribed for the headaches and whatnot? i’m not sure my ankles like it very much. they’re a little swollen. joy.

nineteen. the hut makes a pretty good vegetarian pizza. so from now on, i might be ordering half pepperoni/half veggie lovers on a thin crust. that’s some good stuff.

twenty. now i’ve you are my sunshine in my head. there are worse things.

twenty-one. i can’t comprehend why steven seagal was ever popular.

twenty-two. a couple of weeks ago, i lent out my star wars trilogy to a coworker. he has yet to watch it. the thing had been sitting on my bookcase untouched for months and months and months. in fact, i don’t think i’d watched it since i’d bought them (or received them … i think they might’ve been a christmas present from two years ago or so — because i’d hocked all my dvds and was rebuilding my collection). anyway. i hadn’t felt compelled to watch it, so i figured it’d be alright to lend the thing out. and the longer he keeps it, the more interested i am in watching that series again. of course, the fact that i’ve been watching morning glory over and over again probably hasn’t helped, either.

twenty-three. the top five movies at the box office from last weekend were the diary of a wimpy kid: rodrick rules, sucker punch, limitless, the lincoln lawyer and rango. crap. crap. crap. crap. crap. my god, whatever happened to good cinema?

twenty-five. or why the world needs the hangover: part ii? really?