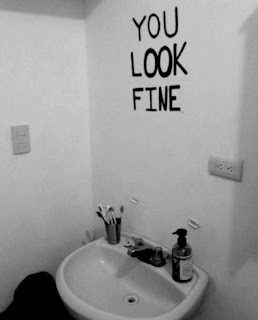 one. i found this on facebook today. LOVE it. we should get rid of mirrors everywhere. okay. well, almost everywhere.

two. i don’t understand why jermaine paul and tony lucca made it to the finals on the voice. seriously. bad. hurts my ears to hear them sing, jermaine more than tony.

three. god damn. i love this advertisement. whoever thought of this is a genius. if a got an email like this from a guy i’d dated, chances are really, really good i’d be giving that guy a helluva second look. i mean, there’d have to be some hellaciously good reasons to say no.

four. i am sick to death of people being nice to people when they don’t care to be nice. it’s bitchier, in my opinion, to put on that sugary sweet smile and use that incredibly false voice and lie to someone you call a friend when you don’t truly value that person’s friendship. hell, i’d rather you be the bitch you are. that’s infinitely preferable to me than fake.

five. my goals as a writer: craft good dialogue; create likable characters; conceive of decent conflicts; be awesome at describing things (this is my greatest weakness).

six. the biggest lack in my life is faith.

seven. the greatest joys in my life are my niece and nephew.

nine. i feel guilty whenever i am depressed.

ten. i worry that i will never be self-sufficient.

eleven. if my dreams come true, my family will be relieved as well as proud.

twelve. i sabotage myself, so people will not know me.

thirteen. if i let myself feel it, i’m angry that i sabotage myself so well and so often.

fourteen. one reason i get sad sometimes is because i sabotage myself so well and so often.

fifteen. most of the time my life feels as though i am only serving myself. i lean toward self-destruction.

sixteen. i don’t trust myself too often. hardly at all, actually. i do it most often when i’m writing. sometimes i think the stories in me, the stories that have, for some reason, chosen me to tell them, are good and were right to choose me. sometimes, i see my stories as being as wounded and tragic and unwanted as i am. and it breaks my heart to think my babies–my characters, the only children i will ever know–will be rejected as harshly as i have been.

seventeen. philadelphia is my favorite tom hanks flick. the scene in the law library… love this movie. so much. directed by the same man who brought you the silence of the lambs. also, the song springsteen wrote for this film is awesome, the best he’s ever done.

eighteen. i wish there weren’t so many reality television shows. fashion star? really?

nineteen. and now i am watching the finale of the voice. kind of makes me feel a little hypocritical. BUT this is the only one i watch. i gotta say, though, i’m a little disappointed in it. i had thought that the best coaches were gonna be adam and blake. but i’ve been more surprised, more impressed with cee lo. he’s a pretty cool dude. like the shirt he wore for the finale with all the names of all the individuals he’d selected for his team from the blind auditions. that’s neat.

twenty-one. i wonder if the reason the music industry sucks so much right now is because so many schools have taken music education out of their curriculum.

twenty-two. i am SO tired of working at target. gah. GAH.