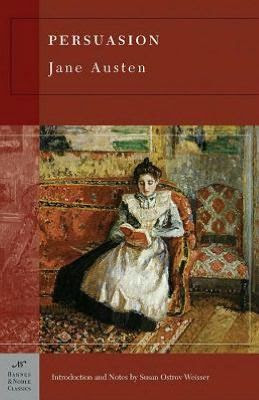 why i wanted to read it: sandra bullock quoted it in the film the lake house: there could have been no two hearts so open, no tastes so similar, no feelings so in unison…

i’d liked pride and prejudice well enough (though i’d forgotten how painstaking reading it had been), and so i’d asked my father to buy me a copy.

it sat, for years, on my desktop. once in a long while, i’d take it down and try to read it, but i never got past the first chapter.

what i liked: the years which had destroyed her youth and bloom had only given him a more glowing, manly, open look, in respect lessening his personal advantages (p. 58).

his kindness in stepping forward to her relief–the manner–the silence in which it passed–the little particulars of the circumstance–with the conviction soon forced on her by the noise he was studiously making with the child, that he meant to avoid hearing her thanks, and rather sought to testify that her conversation was the last of his wants, produced such a confusion of varying, but painful agitation as she could not recover from… (p. 77).

after talking however of the weather and bath and the concert, their conversation began to flag, and so little was said at last, that she was expecting him to go at every moment; but he did not; he seemed in no hurry to leave her… (p 171).

the careless expression was life to anne, who saw that captain wentworth was all attention, looking and listening with his whole soul; and that the last words brought his enquiring eyes from charles to herself (p. 211).

i am half agony, half hope… unjust i may have been, weak and resentful i have been, but never inconstant… you sink your voice, but i can distinguish the tones of that voice, when they would be lost on others… (pp. 223-224).

what sucked: pretty much the whole of the book, excepting the quotes mentioned above and the majority of the text from page 217 on.

i fell asleep SO many times reading this book. oh, if only the whole of the thing could’ve held my attention half as well as the last twenty pages did.

the first sentence of pride and prejudice: it is a truth universally acknowledged, that a single man in possession of a good fortune must be in want of a wife.

the first sentence of persuasion: sir walter elliot, of kellynch-hall, in somersetshire, was a man who, for his own amusement, never took up any book but the baronetage, there he found occupation for an idle hour, and consolation in a distressed one; there his faculties were aroused into admiration and respect, by contemplating the remnant of the earliest patents; there any unwelcome sensations, arising from domestic affairs, changed naturally into pity and contempt, as he turned over the almost endless creations of the last century, and there, if every other leaf were powerless he could read his own history with an interest which never failed–this was the page at which the favorite volume always opened: (p. 3).

note the punctuation at the conclusion of that quote. a colon. A COLON. as in there are more words to follow. because the last quote has MORE than a HUNDRED words in it, BEFORE the colon. try diagramming that. you can’t! it’s not concluded yet!

nine times out of ten, this is what EVERY SINGLE sentence is like.

i like periods. i love them. they’re like little gems. prizes for having read a whole sentence! and boy, would i’ve liked to’ve been rewarded for reading strings of sentences that were sometimes so long they took up a bottom third of a page and a top third of another.

i also love dialogue. and there is so very little of each of these things in this novel. so many times, i would’ve appreciated the white space that comes with quoting what was said rather than relaying it in prose. some pages are huge blocks of text. in fact, there are some pages that are comprised of two paragraphs. two VERY LONG, tedious paragraphs.

having said all that: meh.

(i watched the bbc production this morning, and have greater respect for the plot, and a better understanding of the power of the tale. i think the film succeeds in telling the brunt of the story, but lacks severely in the ending. here, the novel is infinitely better.)