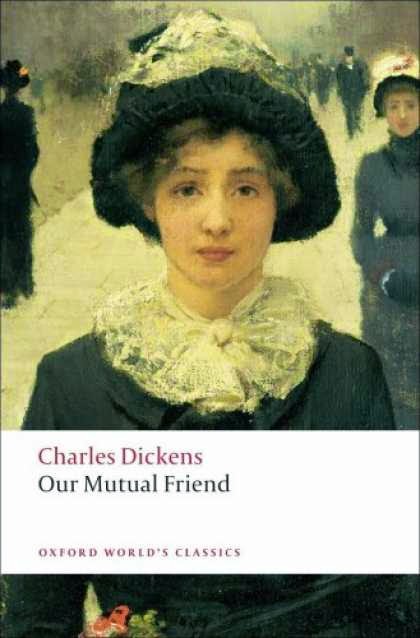 why i read it: the first time? a man (a literature professor) made me. the second time? another man (some dude i met in a bar) made me, though he would say he did not.

what i liked: in these times of ours, though concerning the exact year there is no need to be precise, a boat of dirty and disreputable appearance, with two figures in it, floated on the thames, between southwark bridge which is of iron, and london bridge which is of stone, as an autumn evening was closing in (p. 13).
he had no net, hook, or line, and he could not be a fisherman; his boat had no cushion for a sitter, no paint, no inscription, no appliance beyond a rusty boathook and a coil of rope, and he could not be a waterman; his boat was too crazy and too small to take in cargo for delivery, and he could not be a lighterman or river-carrier; there was no clue to what he looked for, but he looked for something, with a most intent and searching gaze (p. 13).
thus, like the tides on which it had been borne to the knowledge of men, the harmon murder–as it came to be popularly called–went up and down, and ebbed and flowed, now in the town, now in the country, now among palaces, now among hovels, now among lords and ladies and gentlefolks, now among labourers and hammerers and ballast-heavers, until at last, after a long interval of slack water it got out to sea and drifted away (p. 40).
“my respected father has found, down in the parental neighborhood, a wife for his not-generally-respected son… but if he amuses me, i can’t help it… when my second brother was going to be born by-and-by, ‘this,’ says m.r.f., ‘is a little pillar of the church.’ was born, and became a pillar of the church; a very shaky one. my third brother appeared, considerably in advance of his engagement to my mother; but m.r.f., not at all put out by surprise, instantly declared him a circumnavigator. was pitch-forked into the navy, but has not circumnavigated. i announced myself, and was disposed of with the highly satisfactory results embodied before you… therefore i say that m.r.f. amuses me.”
“touching the lady, eugene.”
“there, m.r.f. ceases to be amusing because my intentions are opposed to touching the lady (pp. 148-149).
“i tell you, my good fellow,” said lightwood, with his indolent laugh, “that i have nothing to do with swearing.”
“he can swear at you,” eugene explained; “and so can i. but we can’t do more for you” (p. 151).
“besides, that lonely girl with the dark hair runs in my head. it was little more than a glimpse we had of her that last time, and yet i almost see her waiting by the fire to-night. do you feel like a dark combination of traitor and pickpocket when you think of that girl? (p. 163).
“if it was me that had the law of this here job in hand,” growled riderhood with a threatening shake of his head, “blest if i wouldn’t lay hold of her, at any rate!”
“ay, but it is not you,” said eugene. with something so suddenly fierce in him that the informer returned submissively: “well, well, well, ‘tother governor, i didn’t say it was. a man may speak.”
“and vermin may be silent,” said eugene (pp. 171-172).
a man’s figure paused on the pavement at the outer door. “mr. eugene wrayburn, ain’t it?” said miss wren.
“so i am told,” was the answer.
“you may come in if you’re good.”
“i am not good,” said eugene, “but i’ll come in” (pp. 233-234).
there’s much more, really. but it’s a big book, and i don’t have time to expound on all the goodness.
what sucked: it’s a BIG book. nearly eight hundred pages. and like any dickens novel, it is chock full of incessant, trivial detail. sometimes that man takes a helluva long time to make his point.
having said all that: when he does get around to making that point he makes it quite well. the premise of the story is pretty good. the subplots are, with the exception of one, so much better. if you can manage to trudge through the muck and the mire of the seemingly inconsequential (because those details that seem to be silly DO prove to have merit in the end) bits of the story (and i know how big that if is), i think you’d be glad to know the outcome.