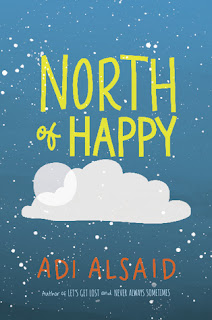 why i wanted to read it: because i needed a book with a cardinal direction in the title, and this one sounded interesting.

what i liked:  i’ve never acted impulsively in my life. felix got all those genes. it feels like i’m borrowing his disobedience, like i’m stealing something, acting unlike myself. but that doesn’t keep me from putting a knee on the suitcase to force it closed…

i look at my reflection in the mirror and can almost see the back wall. all my edges are blurred… i think: i can’t do this anymore. i think: i’m barely even here. i say: “i have to go, dad.”

the words come out like a whimper. so, i’m not stealing all of felix’s personality traits, then. felix never whimpered… for a wild moment i consider confessing, telling them about felix, how i still see him but i feel like i’m the one who’s gone. his death made ghosts of both of us and i just want it to stop (pages 27-29).

i remember going on trips to the store with mom and felix when i was twelve. felix would insist on pushing the cart, running and taking his feet off the ground, letting the cart carry him down the aisles. i’d wander behind, dragging my feet to prolong the trip. i didn’t know a thing about cooking back then, but i was drawn to the ingredients in a way i didn’t understand yet (page 39).

since the night of the perfect taco, i haven’t really been able to make anyone laugh. dad even pointed it out a few times. “you used to be funny,” he said once, as if he couldn’t think of any possible reason why i may have lost my sense of humor (page 105).

on my tenth day of training with chef, i’m making another omelet. i rushed the first one and it fell apart before i could plate it, making chef snort derisively and put me back on onions for the day. the second one looked good to me, but chef stopped at the first bite, reached for the nearby ramekin of salt and dumped it over my head. i’d been so focused on the cooking time that i forgot to season.

this one, though, looks perfect. not a tinge of brown, perfectly shaped and fluffy. i garnish it with a sprig of parsley on top…

now chef is examining the omelet, lifting it up with her fork to inspect the bottom. she lets it drop with a sneer, and pushes the plate back toward me. her eyebrow’s raised. “you expect me to eat that? that’s not how you make an omelet.” then she grabs the parsley sprig and pops it into her mouth. “don’t waste a garnish on shitty food” (pages 191-192).

“a prep garde manger position is opening up. i thought a little test for you would be fun. you’ve been working hard, both with me in the mornings and doing what you’re paid to do. your staff meals are good, but those don’t really mean shit. it’s a little too soon, but let’s see what else you can do.”

“i need a special for the day.” she crosses her arms in front of her chest and nods to the clipboard. “you get to come up with one of them. if i like it enough, maybe i’ll put it on the menu.” i want to run and hug her. all those early mornings, those double shifts made harder by the extra work — this is what they were for. elias was right. “and,” chef adds, “i’ll promote you to the line… i want to see a detailed recipe wth exact quantities of every ingredient you’ll use per portion. make sure we’ve got enough for at least the day. i don’t want to eighty-six it before we’re even setting up for dinner.”

she nods and heads toward the door.

“um, chef?” i ask, remembering all of chef’s outbursts, thinking there’s gotta be some sort of catch to this. “what if you don’t like it?”

i marked a few more pages, but they’re too close to the end for me to comfortably share.

what sucked: it’s a bit predictable, starts slow and the end’s a little too pat for my taste.

having said that: i really liked the characters and conflict. it’s a good story.

sweet jesus, mary and joseph!
i finished the challenge!!!
i did not think i would do it this time because…
GONE WITH THE WIND
and
THE BOOK THIEF
so that’s about
SEVENTEEN HUNDRED PAGES
just those two alone.
but i did it. YEE!!!!!