so i used to go to school in missouri. one of the (many) things i didn’t like about being in school out of state was that i had to eat inferior–and it is inferior… all of it, even your silly ben and jerry’s–ice cream.

i’m a texan, boys and girls. i might rant about the stupid pollen and the hurricanes and the flatness of it, but when it comes down to it, i was born here, and i’ll die here.
because as much as i hate that blasted pollen and the stupid hurricanes and the flatness, there are three really, really great things about this place:
the abundance of trees.
the beauty of the hill country. 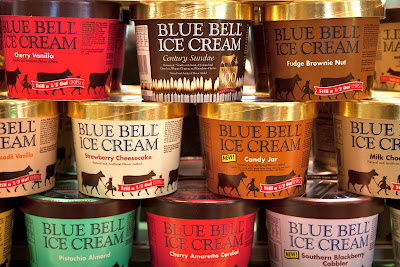 and the bliss that is blue bell ice cream.
that one, sometimes, i missed more than any other. even my mommy. when you’ve grown up with this stuff, when it’s the only ice cream that’s graced your freezer, you start to take it for granted.
i hated having ice cream cravings at college because i always had to settle for the cheap stuff.
my roomies and i were watching television one afternoon when a blue bell advertisement came on the tube. i jumped up, all excited, exclaiming how awesome it was. but my friends blew me off like i was nuts for getting all crazy about some ice cream.
oh, but it’s not any ice cream. it’s the best tasting ice cream in the country.
we used to cart the stuff up to the monastery. mom would call her brothers and take requests, and we’d go to the grocery store and buy six half gallons, and then to get the dry ice and the boxes. we’d pack it up with our luggage and head for the airport. the boxes and the suitcases were dropped on the conveyor belt for the baggage handlers, and we’d board, eager for cooler climates and better scenery (because as much as i love texas, utah’s rather pretty in the summer and a heck of a lot more comfortable).
there, my relatives would argue about which flavor was the best. these debates were ongoing for the entirety of our stay. and every time another half gallon was sampled, votes would change.
this is how good the stuff is, folks.
last summer, one of my college friends who lives in oregon put some status up on her facebook page about how she’d done yardwork all day, and now she was going to sit on one of her lawn chairs with a bowl of ice cream and enjoy the fruits of her labor.
i’d commented that it was too bad she couldn’t have blue bell.
one of her friends who lived in new york saw that and got all excited. she loved blue bell! she’d been trying to find a natural vanilla bean that was as good.
it’s just not possible. i told her she could have some shipped. (for those of you contemplating this, it’s not cheap.)
this is how good the stuff is, folks.
everything else is pathetic.
so imagine my surprise when i could not find a flavor to satisfy my palette.
i brought home mocha madness. coffee ice cream, roasted pecans, chocolate chips and caramel sauce. nope. not enough chocolate.
i brought home cake and ice cream. vanilla ice cream, chocolate sprinkles, chocolate coated cake and chocolate icing. not enough chocolate. i know, right? you’d think i would’ve loved it (and, of course, i do, but it did not appease my craving in the slightest.)
groom’s cake is my absolute favorite, but alas, it must be one of those seasonal flavors that i won’t see for another month or two. it is chocolate ice cream, chocolate cake, strawberry hearts, strawberry sauce and chocolate icing. it is divine. the. best. ice. cream. ever. EVER.
i went to the store today to get some smarties for a project i’m doing for a friend. i debated getting ice cream but thought better of it. the last two times, amazingly enough, had been a bust.
and yet, for some strange reason, i found myself standing before the freezers that held my beloved blue bell (which were shockingly empty…it’s coming on summer already, and we can’t handle heat very well, because it’s blistering, sopping, sticky, boiling, sweaty, nasty, stinky, burning, my-god-i-hate-this-place kind of heat… or maybe it’s because the summer flavors are coming! one can only hope). i stood there, debating…
neapolitan? no. too boring. i used to have that one all the time. mint chocolate chip? no. too minty. banana split? no. my dad had let me have a bit of his the other day, and while it is scrumptious…not enough chocolate. strawberries and vanilla? no. did you not hear me? chocolate! then yes. i snatch it up, turn and take a few steps. then no. i want chocolate!
so i go back and grab the neapolitan.
and. oh. my. gosh. i’d forgotten how much i love this stuff. it’s not exactly what i’d been craving. but it’s darned close.
and you, you who don’t live in the red zones: 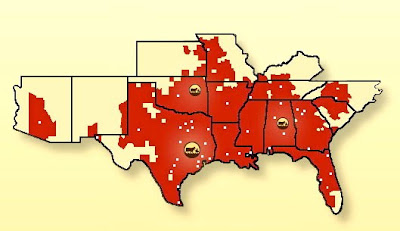 you’re probably wishing you had some in your freezer.
hah! sucks to be you.
this was a matlock project. learn about that here.