let me believe. let me forget. 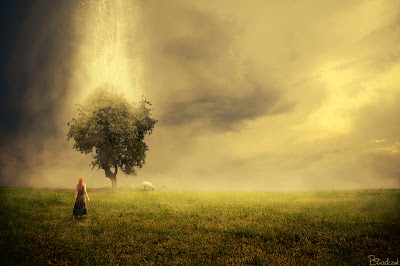 so yesterday, while i was on that miserable date at the zoo, it started sprinkling. i yelled at the heavens to do more than that. i bargained with god, and yeah i know that i shouldn’t do that, but i did it anyway. i said that if he would let it rain, really rain, i’d go to church for the next four sundays.

it really rained. not as long as i would’ve liked, but a deal’s a deal.

i’m not so fond of my church, so i went to a different one. today, it was a better one. (i’m kind of the mind that all church is the same…boring.)

but today’s mass seemed to be tailored for me.

it was about the sheep who stray from the shepherd.

when i was a little girl and my family would take vacations to the other parts of the country, the moment we’d checked in and unloaded our baggage into our hotel rooms, i’d take off. i’m not sure i’d tell my folks where i was going, just that i was. it would never be too far, but i was young enough that it must’ve worried them a little bit. i’ve a habit of wandering off. still do.

they left me in a gallery in santa fe once. i’d found a print i liked. it wasn’t a great print, but something about it appealed to me. it was of a girl standing in a field, holding a candle, with one hand cupped around the flame to keep the wind from extinguishing it. the colors were sort of muted — not pastel, just softer, like everything had been cast in shadow. there were mountains and a house and a sunset in the distance. not an exemplary print, by any means. but for some reason, my interest had been so captured that i’d knelt on the floor in front of it and gawked. my parents and my brothers called to me a number of times that they were leaving. i’d call back, like i was getting ready to get going, but i wouldn’t move. could only sit there. and sit i did, for a very long time.

finally i got up, and they were gone.

so used to wandering on my own was i, though, that i thought nothing of it. i was quite confident that they’d realize they’d left me and would come back for me.

i’m not sure how long it took them to come to that realization. i vaguely remember chatting with the gallery owner while scoping out the rest of the pictures she’d had on display.

my mom came in and got me. she thanked the owner for the trouble. we went on about our vacation.

a week or so later, my parents got a package in the mail. i stood with my mother at the kitchen table in the breakfast room, looking over her shoulder as she unfurled the roll of prints that they’d purchased at that gallery. and there, amidst the pictures my parents had chosen, was the print i’d admired. the woman had included it at no charge because she’d enjoyed watching me study it. i’d been eleven or so at the time. i remember being in awe of the woman’s generosity. people didn’t normally do nice things for me then.

i’m still in awe of that generosity, actually. i still have the print.

the point of that diatribe is this: if a sheep’s got a habit of wandering, isn’t the shepherd somewhat responsible for keeping an eye on the sheep and making sure she doesn’t get lost?

i feel so lost right now. i’ve felt that way for twenty-eight years, and the older i get, the more lost i become.

one of my friends has a song, come on get higher, by matt nathanson on her blog. it’s kind of country. i’m not so much a fan of country music, but every now and then some song will strike a chord. this one’s got something in it about make you believe; make you forget.

i almost cried during mass twice today. i couldn’t sing because the lyrics kept choking me up. and the singing’s my favorite part of mass.

i make it a point not to cry in public. i used to do it all the time as a child when i was in school. and then i learned to hide.

we sang the prayer of st. francis:
where there’s despair in life, let me bring hope
where there is darkness only light
and where there’s sadness ever joy
and, later, the gift of finest wheat:
you satisfy the hungry heart
and as i write this…
the fray’s vienna:
there’s really no way to reach me
depeche mode’s blasphemous rumors:
but i think that god’s got a sick sense of humor
and when i die, i expect to find him laughing
train’s when i look to the sky:
when i feel like there’s no one
that will ever know me
there you are to show me
keane’s somewhere only we know:
simple thing, where have you gone
i’m getting old, and i need something to rely on
so tell me when, you’re gonna let me in
i’m getting tired, and i need somewhere to begin
indigo girls’ closer to fine:
darkness has a hunger that’s insatiable
and lightness has a call that’s hard to hear
i wrapped my fear around me like a blanket
and rachel yamagata’s elephants:
all i want is to just forget you

i am destined to remember, and the memories make me wary. how’m i supposed to find my way back when i’ve wandered off so far? how could he have let me wander off that much? and why does it feel like there’s no one there?

3 responses to “let me believe. let me forget.”