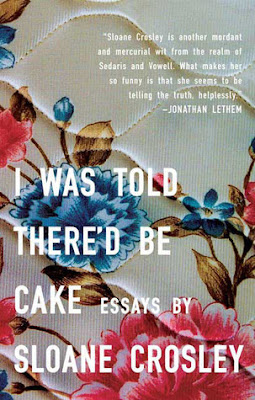 why i wanted to read it: because i liked the title and the cover. because the quote on that cover compared the author to david sedaris, and i love him. also, it’s been sitting on my shelves for YEARS. i figured it’s about time i finish it.

what i liked: i think what happens is that young relationships are eager to build a romantic repertoire of private jokes, especially in the city where there’s not always a great “how we met” story behind every great love affair. people meet at bars, through mutual friends, on dating sites, or because they work in the same industry. just once a guy asked me out between two express stops on the n train. we were holding the same pole and he said, “i know this sounds crazy but would you like to go to a very public place and have a drink with me?” i looked into his seemingly non-psycho-killing, rent-paying, sunday times-subscribing eyes and said, “yes. yes, i would.” he never bought me a pony. but he didn’t have to (page 4).

i like to think of the ponies as a tribute to my type — i date people for whom it would occur to them to do this… the fulfilling of the request isn’t the problem. it’s the request that’s off. they don’t know yet that i make it all the time and i don’t have the heart to tell them how whorish i am with my asking. for them, it’s a deleted scene out of good will hunting. for me, it’s groundhog day (pages 4-5).

from now on i will make a conscious effort to remember — should i find myself face-to-face or pipe-to-skull with the end of my life — that the real proof that i have tried to love and that people have tried to love me back was never going to fit in a kitchen drawer (page 8).

around this time my precious work ethic began to atrophy in earnest and — truth be told — it has never returned… when the phone to ursula’s office would ring, i’d run to the bathroom to avoid picking it up… i was, in fact, in that very spot when it dawned on me that sarah had opted to spend the rest of her life in america’s most violent prisons rather than work another day for ursula (pages 37-38).

unlike other games of the day, which had me leaping through traffic or called me “gumshoe”, oregon trail left lots of room for creativity… i would load up the wagon with people i loathed, like my math teacher. then i would intentionally lose the game, starving her or fording a river with her when i knew she was weak. the program would attempt an intervention, informing me that i had enough buffalo carcass for one day. one more lifeless caribou would make my wagon too heavy, endangering the lives of those inside. really now? then how about three more… it was time to level the playing field between me and the woman who called my differential equations “nonsensical” in front of fifteen other teenagers. eventually a message would pop up in the middle of the screen, framed in a neat box: mrs. ross has died of dysentery. this filled me with glee (pages 55-56).

i am too fond of my memories of oregon trail and not in the market to have them replaced…. i still think of oregon trail as a great leveler. if, for example, you were a twelve-year-old girl from westchester with frizzy hair, a bite plate, and no control over your own life, suddenly you could drown whomever you pleased. say you have shot four bison, eleven rabbits, and bambi’s mom. say your wagon weights 9,783 pounds and this arduous journey has been most arduous. the banker’s sick. the carpenter’s sick. the butcher, the baker, the algebra-maker. your fellow pioneers are hanging on by a spool of flax. your whole life is in flux and all you have is this moment. are you sure you want to forge the river? yes. yes, you are (pages 57-58).

the first floor is actually the second floor, which always struck me as very european until i moved in and had to climb an extra flight of stairs each day. then it just struck me in general (page 60).

it’s newton’s lost law: anything that makes you unique later will get your chocolate milk stolen and your eye blackened as a kid. won’t it, sebastian? oh, yes, it will, my little mandarin chinese-learning, poe-reciting, high-top-wearing friend. god bless you, wherever you are (page 68).

in the past five years alone, i have left my wallet in a cab an astonishing, nay, impressive 6.7 times. (the .7 is for all the times i would have gone id-less into a bar had someone not slid across the pleather backseat after me and said, “forget something?”). with the exception of that first seventeen-dollar idiot’s fee, my wallet gets returned to me fully intact every time. every. single. time…

i was absentmindedly picking my nails and pondering all of this on the subway platform when a small korean woman came out from behind the median map barrier and smacked my arm down. “slun!” she shook her head and held my fingertips in a bunch. “no bite!”… i like the barely there idea of a guardian angel. i could do without the babysitting police (pages 87-88).

our circumstances being poorly paid jobs if we worked in the arts, two hours of sleep if we worked in money, and a newfound sense of intellectual inferiority if we worked in publishing. we were disillusioned by day and deglamorized by night (page 116).

perhaps if i had grown up in rural alaska, living off the fat of the land, or perhaps if my parents had been activists and professors at berkeley, i would be a better person now. but i grew up in new york. the only real do-gooder message i absorbed was “don’t keep jewelry you find in dressing rooms” (page 117).

my mental rolodex began to spin. bingo. francine davis. class of ’96, latin club president, video yearbook, pot yes, liquor no. wait a minute. high school? was i, unbeknownst to myself, one of those girls that peaked in high school and stayed friends 4evr as the backs of our yearbooks decreed we would? sixteen-year-old me would have been flattered by this notion of female solidarity. twenty-six-year-old me was freaked out.

incidentally, this is an unacceptable answer to that question.

i was stunned. i pulled the phone away and looked quizzically at the hole-punched speaker. aside from the blood obligation to be my sister’s maid of honor, it had never occurred to me that i would get asked to be in anyone’s wedding. i thought we had reached an understanding, the institution of marriage and i. weddings are like the triathlon of female friendship: the shower, the bachelorette party, and the main event. it’s the iron woman, and most people never make it through (page 143).

once, at a coworker’s birthday party, a woman i had met twice announced her engagement.

“congratulations.” i lifted my plastic cup of wine.

“save the date,” she responded, squeezing my hand.

i didn’t know the name of her fiance. i didn’t know where she lived. i knew her last name sounded like “crevice,” but i could never remember it. i was definitely getting a c vibe. yet she felt she knew me well enough to invite me to one of the most sacred events of her life (page 145).

gold calligraphy came swirling under my door while i slept. it crept into my closet, taking stock of my strappy sandals and pastel pashminas. it curled and swirled and wrapped its vowels around my wallet…

and then francine called me to be part of her wedding party. a wedding that was to go down in the middle of july. oh, the humidity. out of all the girlfriendships in the world, what made her call out like a foghorn for mine?

… i had barely spoken to this woman in a decade. if i got married tomorrow, chances are it wouldn’t occur to me to invite francine. it’s a wedding, not an episode of this is your life. i thought: what’s wrong with her? i thought: where is her big group of girlfriends?

i agreed because, barring exorbitant plane fare or typhus, you can’t not agree. not only is it a social slap in the face and a personal kick in the feelings, it also puts a silent price tag on the friendship, no matter how faded that friendship is. if the average bridesmaid’s dress costs $250 and the average bridesmaid’s shoes cost $125, and you refuse to participate, that’s like saying you wouldn’t pay $375 to maintain that friendship. it’s like saying if deranged pirate terrorists kidnapped the bride and demanded $375 and a few hours of your time in exchange for her life, you’d hand them the musket yourself (pages 146-147).

the e-mail suggested that we all get together for a last-minute bachelorette party the following night. mixed drinks, penis quizzes, plastic tiaras, the works. but i had unbreakable plans. plans i had made months before with a friend who was leaving the country for two years and with whom i had actually spoken in the last decade, on multiple occasions, no less.

“i know this is a once-in-a-lifetime thing for you,” i e-mailed my apologies. “but also once in a lifetime: one of my closest friends moving to addis ababa.”

francine called again, this time with the double agenda of logistical and emotional concern. she renegotiated. since i was unable to attend the impromptu bachelorette party, perhaps i’d be interested in a long and pricey train ride to boston to stay on her pullout couch and meet her fiance? say, this coming weekend? or maybe i could get the whole week off work?

“i just want you to meet boris and spend some quality time with him before the wedding,” she pouted.

i felt guilty for not giving her the bare minimum of what she needed. how inept at this bridesmaid stuff could one person be? but it seemed she “just” wanted a lot of things lately. every request was minimized to the maximum (see: “i ‘just’ think it would be great if you wrote a poem in iambic pentameter for the candle-lighting ceremony”) (page 159).

… i laughed very hard. wine shot up my nose, which i decided was god’s way of telling me it was time to switch to hard alcohol…

what sucked: okay. so yeah. i marked a lot of pages. and yeah, she can be rather clever. but ultimately, there are fifteen essays spanning two hundred twenty-eight pages. sounds like an easy enough read, yeah? the snippets i’ve shared come from eight of those stories. of those eight, i liked, in their entirety, three of them. overall, reading this book was like reading an assigned text for one of those english classes i had in first three years or so, when i didn’t give a fuck about anything but sleep and cinema. also, she’s nothing like sedaris. not really.

having said all that: i didn’t hate it. i don’t know that i could recommend it. it’s going in the giveaway pile.