harry potter and the sorcerer’s stone 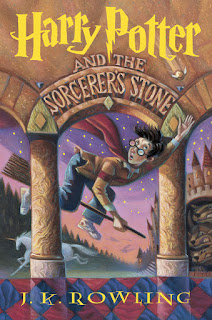 why i wanted to read it: oh, i didn’t. when this novel was published nearly two decades ago, i was a scanning technician at a printing company in houston. not long after, i changed jobs, choosing instead to work as a bookseller for borders. i seem to recall management having to go to sam’s club and purchase additional copies of one of rowling’s books because the store hadn’t ordered enough. i can recall balking, with great success for a significant period of time, against reading any of these novels.

and then i rode with my mother to see finding nemo. and she was listening to harry potter and the order of the phoenix, and i was hooked. i borrowed all of her audios. i bought all the books. i’ve read them repeatedly. why have i read it again? because rowling has said that the story is a delusion created by ron, a statement which i wish had not been said. because i’m curious to imagine ron having said delusion, but more, i’m missing richard harris as dumbledore, and in reading it, i can imagine him again (which is sometimes better than seeing him on the screen). anyway. why have i read it again? because it’s nifty, i tell you.
what i liked: the first page is beautiful…
mr. and mrs. dursley, of number four, privet drive, were proud to say that they were perfectly normal, thank you very much. they were the last people you’d expect to be involved in anything strange or mysterious, because they just didn’t hold with such nonsense.
mr. dursley was the director of a firm called grunnings, which made drills. he was a big, beefy man with hardly any neck, although he did have a very large mustache. mrs. dursley was thing and blonde and had nearly twice the usual amount of neck, which came in very useful as she spent so much of her time craning over garden fences, spying on the neighbors. the dursleys had a small son called dudley and in their opinion there was no finer boy anywhere.

the dursleys had everything they wanted, but they also had a secret, and their greatest fear was that somebody would discover it (p. 1).

“can’t stay long, mother,” he said. “i’m up front, the prefects have got two compartments to themselves–“

“oh, are you a prefect, percy?” said one of the twins, with an air of great surprise. “you should have said something, we had no idea.”

“hang on, i think i remember him saying something about it,” said the other twin. “once–“

harry learned that there were seven hundred ways of committing a quidditch foul and that all of them had happened during a world cup in fourteen seventy-three; that seekers were usually the smallest and fastest players, and that the most serious quidditch accidents seemed to happen to them; that although people rarely died playing quidditch, referees had been known to vanish and turn up months later in the sahara desert (p.181).

“there’s no need to tell me i’m not brave enough to be in gryffindor, malfoy’s already done that,” neville choked out (p. 218).

“you know how i think they choose people for the gryffindor team?” said malfoy loudly a few minutes later, as snape awarded hufflepuff a penalty for no reason at all. “it’s people they feel sorry for. see there’s potter, whose got no parents, then there’s the weasleys, who’ve got no money–you should be on the team, longbottom, you’ve got no brains.”

neville went bright red but turned in his seat to face malfoy.

out on the stone steps, harry turned to the others.

“right, here’s what we’ve got to do,” he whispered urgently. “one of us has got to keep an eye on snape–wait outside the staffroom and follow him if he leaves it. hermione, you’d better do that.”

“so light a fire!” harry choked.

having said that: i love this story. read it if you not. read it again if you have.

3 responses to “harry potter and the sorcerer’s stone”