sometimes i think, i was a good person once. i was. i’m not now. i drink too much. not so much that i need to be committed somewhere. but enough. just enough that i shouldn’t. i’m too judgmental. and i think too much. too often, what i think… it’s ugly. and i can’t talk about it. i can’t. i can cry, though. i do a lot of that.

the other day, i found this video. maybe you’ve seen it. it’s about coming out of the closet. now. that closet, it doesn’t have to be labeled gay. mine’s not. the point of the video is that we all have a closet. and sometimes we hide in it.

i’m having a glass of wine tonight. it’s been a rough day. this might not be the most coherent post i’ve ever written.

but sometimes, writing… it helps.

i’m not a good person. i’m generous, yes. i try to be thoughtful. but… i’m not good.

i spent the day with my mother. she’s in her seventies. she’s watched her three children wreck their lives. she’s watched us piece them back together only to wreck them again. she was a teacher. i tried to tell her today that the wreckage isn’t a reflection on her parenting skills. she told us how to be good. it was up to us to listen.

but she couldn’t agree with me.

she thinks the wreckage is her fault. that she should’ve tried harder. done better. i tried to tell her that if she had twenty students, and three of them failed, that it’s their fault. they should’ve payed attention in class, done their homework, studied harder. the other seventeen passed, so obviously, she’d done her job.

but the three failed. so, in her mind, she hadn’t.

before i went to work tonight, i stopped by the bookstore to check out max lucado’s you are special. my friend had written a blog post for me about that story. and it helped, reading that. i sat there, on one of those impossibly small chairs, weeping as i read.

and then i went to work. and was reminded of how impatient and intolerant and temperamental i can be. of how miserable i sometimes think life is.

and then i came home. poured myself a glass. dragged myself upstairs to the study. got on the computer, logged onto facebook…

and there’s the story of the secret santa and the heroin addict.

seeing these videos made me think of this quote: 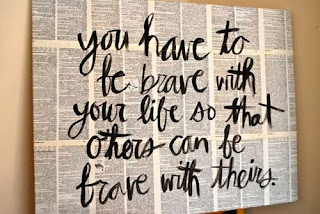 and the communion song for saturday night’s mass is be not afraid.

One response to “hard conversations”