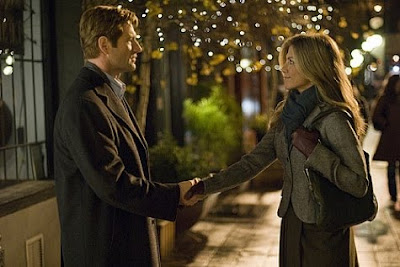 it’s a story about a man who seems to have overcome his own grief and now preaches to others about the tools he used to do so. but he hasn’t overcome it. his grief has made him bitter; he masks that as well, in front of strangers, especially when he’s standing in front of those who’ve traveled from far and wide to get help from him.

he’s forced to go to seattle to give one of his seminars. he’s really unhappy about being there, and all he wants to do is get the show over with and make the deal that would rocket him into mad crazy success…the type that means national television shows and dvd releases and products that tie-in to the bullshit he preaches.

he’s miserable. and then he meets eloise (aniston), a florist who’s got really bad luck with men.

the only bad things i’ve to say about it are that there’s one scene out of a whole bunch that’s a tad bit cheesy and that i wish they’d used music that’s not been used in movies before. i realize that sometimes there’s a song that really fits a scene and not using it because someone else already did would be wrong, but with the exception of john hiatt’s have a little faith in me, the songs they picked aren’t that great. and even then, they used that song in the wrong place.

it’s heavy. the writers found the biggest dump truck they could and loaded it up with burke’s bullshit and his baggage and that of the people who’ve sought his assistance. it’s a pretty good story, though. those writers gave it humor, too. and despite that heaviness, it’s a cute movie.
love happens is rated pg-13 for some language including sexual references. its running time is one hundred-nine minutes.
having said all that…
i miss my brother. grief’s a sneaky bastard.

and if missing him last night wasn’t enough, i dreamt i was at a&m, back when he was in the corp, only in this dream he would’ve been a senior (he got kicked out before that happened, but … it’s my dream, and in it, my brother was good). he was going to be giving some class for his unit on some corp thing, and i, longing to see my brother being good, snuck into his building, to the classroom and started chatting up his fellow cadets (this never would’ve happened … back then i was too shy to talk to anyone outside of my family, but hey, it’s my dream, and in it, i’m being good, so …). he hasn’t gotten there yet. i chat with a lot of guys. they all say good things about him. i chat with one of his best buddies, one with whom he’d gone to high school (one who now has three children). it’s sunny outside. pleasantly warm. a perfect day. and i’m gonna get to see my brother in action. i’m gonna get to see him be the badass i know he can be. but he didn’t show, and i woke up before i could figure out why.

of course. why would he be there? he’s not here.

. . .
(you gotta love how i go back and forth from one tense to the other. and i never have any idea i’m doing it until i read it weeks later. my mother would not be pleased.)