mental floss posted an article about fifteen offbeat holidays to celebrate in november. i made up a scavenger hunt using the dates referenced in the article as prompts. not only did i have to do the things, i had to take a selfie (and i LOATHE selfies) of my having done the thing. 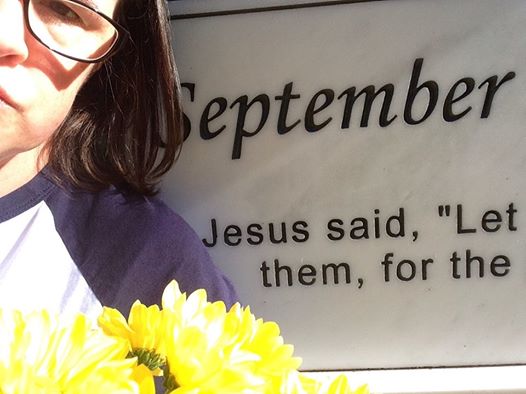 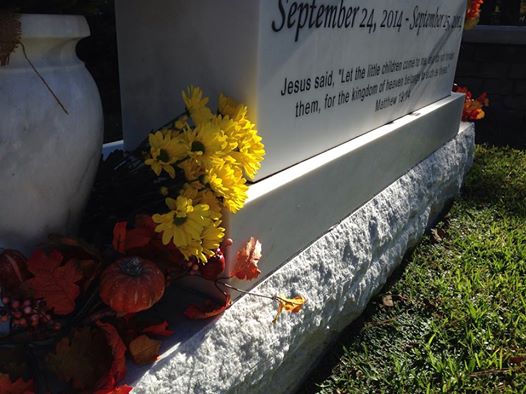 one. november second: plan your epitaph day. here’s a happy one for yall. buy a small batch of posies, visit a cemetery and leave the flowers at the grave of someone whose headstone struck some sort of chord with you. sometimes people leave quotes on them. my older brother’s buried in colorado. his headstone is a bench upon which are the words laughter was his art. if you’re feeling especially generous, maybe send up a prayer of thanksgiving for that individual’s family and friends.

i didn’t have to go far for this one. one of my mom’s students is buried in a cemetery minutes from our home. i’d gone there to try to find her. the first to catch my attention was the grave of a one-day old boy named hank. i always liked that name. matthew 19:14. let the little children come to me, and do not hinder them, for the kingdom of heaven belongs to such as these.

two. november third. sadie hawkins day. get a guy’s phone number. do with it what you will.

three. november fourth. king tut day. yall know that bangles song walk like an egyptian? if you feel like strutting your stuff in public to the tune of that insane eighties hit, be my guest. or if you’re in new york and can get to the met, supposedly they’ve got egyptian art on display. maybe a museum near you does? i got no idea. look into that. i’m cool with you browsing the stacks of your local library or bookstore. find a book about king tut or the egyptians… factual or fiction, turn to page one hundred fourteen, what’s the fourth word on the eleventh line?

four. november fifth. guy fawkes day. ever wanted to give a senator, congressman or some other elected official a piece of your mind? i put a letter in the mail to the president the other day. i didn’t care that he’ll most likely never see it; it felt good writing it, addressing it and dropping it in one of the united states postal services boxes, complete with my jimi hendrix stamp in the top right corner. find out who’s running things in your neck of the woods. try bitching to him instead of your twitter and facebook accounts.

five. november sixth. national saxophone day. find a sax player. get the man a drink. or girl, though… i can’t say i’ve ever seen a woman play the sax. if you find one, lemme know.

six. november seventh. international tongue twister day. go to your local bar when it’s hopping. get a stranger to get through the woodchuck chucking wood or so and so selling seashells by the seashore. without tripping over the words. buy that person a drink when the deed’s accomplished.

one of the gals in the book club to which i belong chose the twister. i limited it to one line: mrs. puggy wuggy has a square cut punt. the whole thing’s pretty spectacular, really. she found it here.

seven. november thirteenth. world kindness day. do something good for someone. this can be anyone: family, friend, stranger… whatever. once you’ve done it, find out three things about that person. choose from the following: their best day; their worst (if they feel like sharing); their favorite book; favorite film; favorite band; favorite song; favorite food; best vacation; where’d they’d most like to go for their next vacation; the job they have now; the job they’d love to have; whether they like dogs or cats; coke or pepsi.

three things about the gal on the left: best day: one spent with family; where she’d most like to go on vacation: italy; favorite film: walk the line. and three about the one on the right: she prefers coke over pepsi. her best vacation was cancun (white sand, blue water, lots of liquor); favorite food’s pizza (pepperoni with black olives from dominos).

eight. november fifteenth. clean out your refrigerator day. show me the nastiest thing in there. WHY IS IT STILL IN THERE?

nine. november eighteenth. use less stuff day. i’ve got books on the brain lately, so… round up some of your books that are in good condition and donate them to your local library (or to a friends of the library group). AND/OR clean out your closet and donate the things to a women’s shelter.

ten. november nineteenth. world toilet day. well this one’s fascinating. my younger brother would have a field day with this one. there is such a thing as a bathroom guest book. find it. buy it. give it to that special idiot in your life.

eleven. november nineteenth. international men’s day. how interesting that this occurs on the same day as world toilet day. get a gift card valued at no more than twenty-five dollars to some store or restaurant dudes love. dick’s sporting goods, perhaps (though i hear their shit’s way overpriced…so academy may be a better bet). give it to a random guy. just because.

the day i tackled this one, i was at starbucks with a couple of my writing friends. one of them suggested i get a gift card from the boardroom, which is basically a really upscale barber shop.

twelve. november twenty-second. national start your own country day. i’m pretty sure half of america would jump at the chance. let’s keep this one civil, though, yeah? where’s your favorite spot? where do you go when the day is just too ugly and you need to see something good? show me what your country would look like. in a perfect world, my country would be on a beach in fiji or a flat in london… i’m looking for something a little more realistic here. there’s gotta be a place you go when you need to get centered. show me that.

i’d intended to use a photo of lake woodlands as seen from the edge of northshore park, but there was a fence in my way. and then it occurred to me: in my free time, which isn’t really free because i’m typically using it to write, i’m at deaux’s, so… that is my spot. those are my people.

thirteen. november twenty-third. national day of listening. i know the purpose of this day. we tune each other out so often, and with such success. nothing proves that more than an election. we only hear what we want to hear. nine good things might be said, but there’s that one word or phrase… music soothes the savage beast, and things are much too savage right now. check out who’s playing at your local pubs or concert halls. pick a band you’ve never heard of before. go see them play. listen.

fourteen. november twenty-eight. red planet day. have fun with this one. i’m giving yall a freebie. interpret this one however you’d like, so long as it can be tied to mars somehow. pottery barn kids sells a planet mobile, for example. find that. get a picture with it. grab a copy of the martian, turn to page eleven and share the eighth word on the twentieth line. watch the film the martian child and share your favorite line. men are from mars, right? introduce yourself to a stranger and pick his brain; ask him anything you want. go to town. show me how crafty and clever you can be.

i chose to watch martian child. david (john cusack), a science-fiction novelist and widower, must decide if he wants to go through the plans he’d made with his wife to adopt a child. he meets dennis, a boy who insists he’s from mars. i love this movie. i forget how much, and then i watch it again, and it’s like my love for it grows with every viewing.

david: are you a friend of his or what?
esther: no, he’s a weirdo. he doesn’t have any friends.
he doesn’t? where is he hanging out?
he’s in the box. he doesn’t come out until night.
why does he do that?
the sun. he hates the sun.
why does he hate the sun?
i don’t know. because he thinks it’s too sunny?

fifteen. november twenty-ninth. national square dance day. i’m sure there’s a square dancing group near you. find out when they meet. catch’m in their act. find out what they love most about being involved in that activity.

2 responses to “fifteen things celebrated in november: a scavenger hunt”