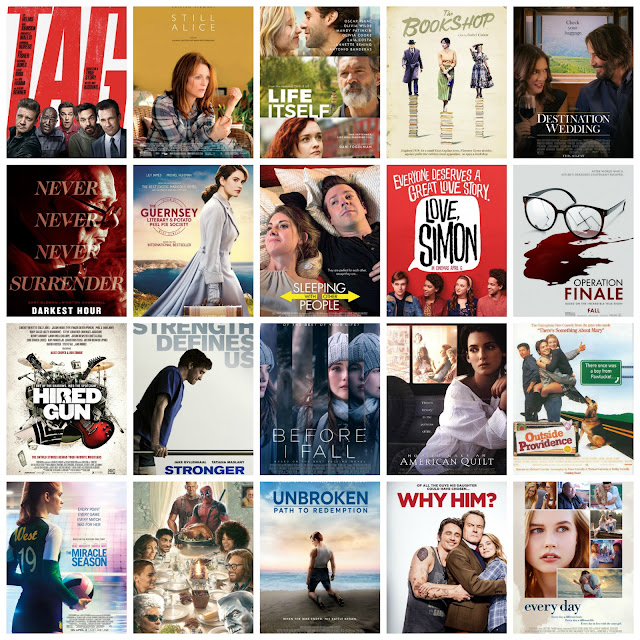 okay. so first off… i’ve decided i’m going to attempt to watch fifty movies this time around because i’ve never managed to do the regular AND bonus round lists, and i want to see if i can do it. this means that i had to bump some movies off my original list. the gray areas are more immediate responses that i’d left in the facebook group.

one. tag. i LOVED this movie, yall. it was HILARIOUS. what made it awesome for me was knowing this was based on a true story. these guys have been playing tag FOREVER. once a year, just for the month of may, the game resumes. these guys had FUN making this movie, and it shows. i’ve watched this one twice.

two. still alice. this was beautiful. BEAUTIFUL. julianne moore is amazing. my paternal grandparents suffered alzheimer’s. i expect my father will do so as well. her portrayal is pretty spot on, and the supporting cast does a good job, as well. my only complaint is that i expected this one to make me cry, and it did not.

good movie. hard to watch, mostly because my paternal grandparents had alzheimer’s, and i’ve always worried that my father, that i would struggle with it. the cast did a fine job. connection: julianne moore starred in benny and joon with johnny depp who was in black mass with bacon.

three. life itself. this one’s my favorite on my list, so far. it’s PACKED with conflict, yall, and the cast — everyone of’m — does a phenomenal job relaying how that conflict affects them. oscar isaac is INCREDIBLE. i’ve watched this one twice.

HOLY FUCK THIS WAS GOOD. definitely NOT a date movie, but DAMN dan fogelman knows how to write a script… someone on twitter said she’d walked out after the first forty minutes because it was excruciating… it’s NOT an easy film to watch, and the beginning isn’t great by any stretch… but the last forty minutes are EXCEPTIONAL. connection: oscar isaac starred in inside llewyn davis with john goodman who starred with bacon in patriots day.

four. the bookshop. this one packs a punch, too, and i didn’t think that it would. to be honest, i was kind of bored through the first half, and then all the sudden there’s this power — a kind of quiet rage. i really hadn’t expected that, and i love that something so simple could be THAT powerful.

slow, but surprisingly powerful. love bill nighy here. might be my favorite of his performances. love patricia clarkson. might be her best work, but my god her character’s repulsive and vindictive. connection: clarkson starred in playing by heart with jay mohr who starred with bacon in picture perfect.

five. destination wedding. keanu reeves and winona ryder had a damn fine time making this one, i think. their characters aren’t very likable, and yet i loved them. i’ve watched this one three times.

this one made me laugh a lot. i had a feeling it would, and i’m glad it did. it’s VERY focused on the two characters and dialogue HEAVY, which i didn’t mind. they are unhappy people with biting wit, and it does get to be a bit much, but right about the time you think oh god… there’s just enough sentiment, just enough goodness in them to get you to the end. i don’t know that i would want to watch it again, and yet, i kind of miss their characters already. i think what i like best about it is that reeves and ryder looked very much like they enjoyed making this movie. connection: winona ryder starred in edward scissorhands with johnny depp who starred with bacon in black mass.

i got a little teary-eyed in this one, which i hadn’t expected. god love winston churchill. we need more men like him in the world. god love gary oldman for playing him so well. connection: oldman starred with bacon in murder in the first.

seven. the guernsey literary and potato peel pie society. i liked this one.

eight. sleeping with other people. NOT a fan of jason sudeikis, but i didn’t mind him in this movie. liked the story well enough. it had some moments that i felt were pretty strong.

i figured i would like it, and i did (even though i’m not crazy about jason sudeikis), but it had some strong scenes, and that surprised me. i liked the characters. connection: amanda peet starred in playing by heart with jay mohr who starred with bacon in picture perfect.

nine. love, simon. this was good. i liked it. love jennifer garner and josh duhamel. i thought the cast did a pretty good job with this one.

liked this one. good stuff. connection: jennifer garner starred in thirteen going on thirty with judy greer who starred in love happens with jennifer aniston who starred in picture perfect with bacon.

ten. operation finale. hell of a story, this one. everyone should watch it.

AMAZING. WATCH THIS NOW. connection: melanie laurent starred in inglorious basterds with brad pitt who starred with bacon in sleepers. (oscar isaac is my hero.)

eleven. hired gun. this one made me not like billy joel very much, but it made me see alice cooper in a very positive way, which i appreciated. i enjoyed learning more about how the music industry works.

i decided to watch this because my dad was a musician in high school and college — he played with the winters brothers — and i sometimes wonder what life would’ve been like had he chosen to follow the musical path. this made me feel sorry for musicians, actually. i no longer like billy joel or richard patrick. jason newsted looks like an idiot. i saw neal schon, aaron lewis and mike mushok in the credits… would’ve been interesting to see their clips. loved seeing pink. loved listening to rudy sarzo, kenny aronoff and alice cooper talk. connection: jon bon jovi starred in new year’s eve with robert deniro who starred in sleepers with bacon.

twelve. stronger. so i watched patriots day, which was a really good look at the first responders and law enforcement agencies who worked to save those affected by the boston bombers. i wanted to watch this one because it kind of focused on one person and how the event affected him and those close to him. it was difficult to watch, but the ending impressed me quite a bit.

hard to watch, but there’s a moment toward the end that makes watching it SO worth doing. gyllenhaal starred in a dangerous woman with debra winger who starred in terms of endearment with jack nicholson who starred with bacon in a few good men.

thirteen. before i fall. i liked this one. good story. predictable, but good. interesting.

this one was a hard one for me to watch, and i pegged the ending. but i liked it. connection: jennifer beals starred in four rooms with marisa tomei who starred with bacon in crazy stupid love.

fourteen. how to make an american quilt. i wanted this one to be better. SO much better. i didn’t much care for this one.

for such a STRONG cast and decent amount of conflict, this movie is WEAK. connection: samantha mathis starred in pump up the volume with christian slater who starred with bacon in murder in the first.

fifteen. outside providence. this one was alright. i wish alec baldwin had been in it more.

not bad. not one i’d want to watch again. connection: richard jenkins starred in eat pray love with julia roberts who starred with bacon in flatliners.

sixteen. the miracle season. meh. i didn’t care much for this one, either.

so i’m the girl who looked at the main photo on imdb’s site for this film and thought west, texas. like the volleyball team there came back to win a championship after the town suffered a tragedy. it’s iowa city west… and they lost a player. it’s a good story, but the execution’s typical, predictable, formulaic schmaltz. i loved the credits. would’ve liked the film better if it had had as much heart as that player had. connection: helen hunt starred in as good as it gets with jack nicholson, who starred with bacon in a few good men.

seventeen. deadpool two. didn’t like this one nearly as much as the first. not sure they should’ve made a second one, actually. all the things that made the first one so good were absent from the sequel.

agree with zosh (who said she thought it was funny, but she still preferred the first). connection: brad pitt starred with bacon in sleepers.

eighteen. unbroken: path to redemption. i picked this one because i watched the first part of this story last year and wanted to see the continuation of it. the sequel’s MUCH more well-done than the original. but there’s no reason why these two films couldn’t have been one.

this watch MUCH better than the first one. but there should’ve been ONE movie telling the story, not two very drawn out halves.

nineteen. why him. meh. i thought i was going to love this one. i didn’t. i did like megan mullaly in it, though.

the trailer CRACKED ME UP. the movie did not. i did love megan mullaly, though, and i’ve never cared much for her work before, so it was really nice that i could appreciate it here. it’s funny. just not as funny as i wanted it to be. connection: james franco starred in alien covenant with billy crudup who starred with bacon in sleepers.

twenty. every day. this one SUCKED. it was such a STUPID, STUPID story. don’t waste your time.

SO, SO, SO, VERY, VERY, VERY B A D. DO NOT watch this shit. connection: maria bello starred in coyote ugly with john goodman who starred with bacon in the patriot.