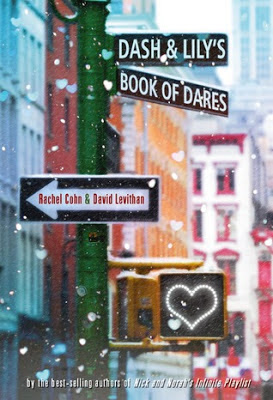 why i wanted to read it: because they wrote nick and norah’s infinite playlist, which i loved. because i like that the authors alternate chapters. because i’d expected it to be a quick, engaging read, and i wanted to start simple, because half the books i’ve chosen for this month are HEAVY.
what i liked: “if you tell me, i will leave you alone,” i said. “and if you don’t tell me, i am going to grab the nearest ghost written james patterson romance novel and i am going to follow you through this store reading it out loud until you relent” (pp. 146-147).
“i’m persnickety,” i confessed. “not, incidentally, to the point of being snarly. but still. delightful and persnickety are not a common blend” (p. 153).
“lily,” edgar thibaud said, oozing sincerity. he took my hand in his. my hand, now oozing sweat, quivered from his touch. “i’m so sorry about your gerbil. truly. i would never knowingly harm a sentient being.” his lips placed a contrite peck upon my knuckles.
i happen to know that edgar thibaud graduated from killing gerbils in first grade to becoming one of those fourth-grade boys who use magnifying glasses to direct the sun to fry worms and other random insects in alleyways.
it is possibly true what grandpa’s buddies have repeatedly told me: teenage boys cannot be trusted. their intentions are not pure.
this must be part of mother nature’s master plan–making these boys so irresistibly cute, in such a naughty way, that the purity of their intentions becomes irrelevant (p. 156).
“what have we learned, lily,” mrs. basil e. asked me as she poured me a cup.
“taking too many sips of other people’s drinks can lead to disastrous consequences.”
“obviously,” she said imperiously. “but more importantly?”
“don’t mix drinks. if you’re going to sip peppermint schnapps, only sip peppermint schnapps.”
“thank you” (p. 178).
the dash fellow never showed up to see his snowman. i would’ve shown up if someone had built me a snowman, but i am a female. logical (p. 199).
and the premise of the story is cute and clever: girl leaves a red, moleskin notebook atop a copy of franny and zooey with a dare inside. boy finds notebook and accepts the challenge. but the greatest dare, of course, is getting to know one another.
what sucked: the last forty-seven pages, otherwise known as chapters seventeen through twenty. that i was just starting to really like the story when it took an incredibly ridiculous turn and never righted itself. nor was it a quick read like nick and norah’s tale had been. nor are its characters anywhere near as likable as nick or norah.
having said all that: i liked it well enough. but i did not love it. the whole time i read it, i was confident that someone would choose to adapt it for the big screen. and sure enough… perhaps the film will do the story better justice than the book did. of course, the film version of nick and norah’s story was abominable. so i’m not holding my breath.