blame it on the janes

i managed to go through high school and college, studying english, without ever having to read any of jane austen’s or charlotte bronte’s works. i’d graduated with that english degree without ever having read dickens, too.
can you imagine this? i’m certain there are dozens of other classical authors revered by educators of all sorts which are considered to be necessary to the literary world, which they would be appalled to know i’d not read.
do you know what made me want to read pride and prejudice?

the trailer for the knightley/macfadyen version of the tale.

actually, a particular quote from the film, spoken by mr. darcy to ms. bennett after having professed, to his chagrin, his interest in marriage to her. could you expect me to rejoice in the inferiority of your circumstances?

i love this line. i love how it cuts. i love how the word choice — the sharpness of the k and the x and the ct sounds, the bite of it, the hiss of the soft c and the s and even the f — contributes to the sentiment expressed. there’s such disdain there. such frustration, not just in that sentiment, nor its language, but in the delivery of it, as well. it’s a fantastic line. marvelous, really. and it, more than any other, sums up mr. darcy quite well, i think.

i hunted up that bit of script while at work one day, so eager was i to see the film, to know the story. i printed out the page or two of dialogue i’d found, and, after work, taken it in to macaroni grill with me to study while i had dinner.

actually, i did more than study it. i took my red and blue crayons and diagrammed the whole of those sentences — darcy’s in blue, bennett’s in red — on the butcher paper that covered my table’s cloth.

this version of the film interested me enough that i purchased a cheap barnes and noble classics version of p and p and read it, painstakingly and begrudgingly, for the most part, cover to cover.

while i can concede that ms. austen can construct some fantastic prose, her propensity for girlish, frivolous detail is pretty annoying. 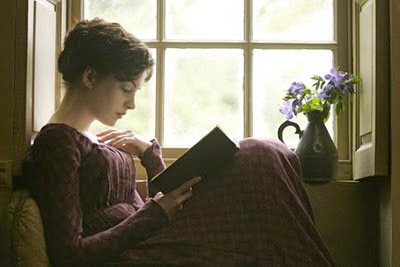 and then the cinematic world introduced me to becoming jane a couple of years later.

and oh, how my heart broke for her.

every time i’ve watched this movie, i’ve stood firmly in the knowledge that she was right to refuse mr. wisley, and she was right to turn back, to go home rather than run away with mr. lefroy. but the first few times i watched her departures from him, first from his uncle’s residence and later on the morning of her elopement after she’d discovered the letter from his family, i bawled. quietly, of course, but still …

and every time, i’ve been gung ho against the notion that she should marry wisley. because he is, as her father has said, a booby.

it must be age. my birthday is less than twelve weeks away, and i am abhorring this one. it’s far, far too close to forty for my comfort.

it has to be age. there’s no other reason for it. but this morning, as i watched the story unfold, i began to think wisley wasn’t so bad. wealthy, tall, decent voice …

oh, god. i think i’m going to be sick. this shift in my opinion of him is not good at all.

it wasn’t THAT long ago that i was mocking his character.

i hate watching this movie. it crushes my spirit every time. and yet, i feel compelled to torment myself with it. so typical of a woman, right?

i’m blaming this on jane eyre.

i saw the trailer for it a couple of weeks ago, and it got me thinking about these women, factual or fictional, who are deprived of lives of love and passion.

i’ve not read jane eyre. i was tempted to watch the bbc production of it a while back but talked myself out of it. probably because mr. rochester sounds like an idiot.

do you think that because i am poor, obscure, plain and little that i am soulless and heartless?

if there were a line that could convince me to see this film, that would be it. but it doesn’t compel me nearly as well as mr. darcy’s line did.

mostly because it’s spoken to mr. rochester, and i just told you what i think of him.

my father says i’m a whole lot more sentimental than i let on, than i am comfortable with, and this is true to an extent.

but sentiment hasn’t ever really done me much good, so i see no point in showing off that bit of my character.

the point of all this is that i feel sorry for these women, these janes who live so much of their lives without the thing they most desire for themselves.

i read wikipedia’s synopsis of jane eyre, and i know she gets her guy in the end — after mr. rochester’s wife burns the house down and kills herself and blinds her husband and whatnot. (this would be the other reason why i can’t bring myself to read it … way too much tragedy for my tastes.)

i saw the trailer for this film the other day and it brought memories of becoming jane to mind, which of course had me itching to watch it again.

so i will go to sleep sad and sentimental.

bronte, by the way, married and became pregnant but died before giving birth. she was thirty-nine. austen received a proposal from a wealthy but pathetic man which she accepted, then refused the following day. she never married. she died at forty-two.

and here, these two women wrote all these stories that are so well-loved by so many (though i cannot say that i am one of that many, but still … i can respect others’ appreciation for their works) … at least they’ve left the world these.

i have given nothing but a couple of chapters to my friends and a few snippets to my readers.

because unlike these women, i cannot seem to find the courage to write about love when i find it so lacking in my own life.

and this is how i shall end my day.

3 responses to “blame it on the janes”