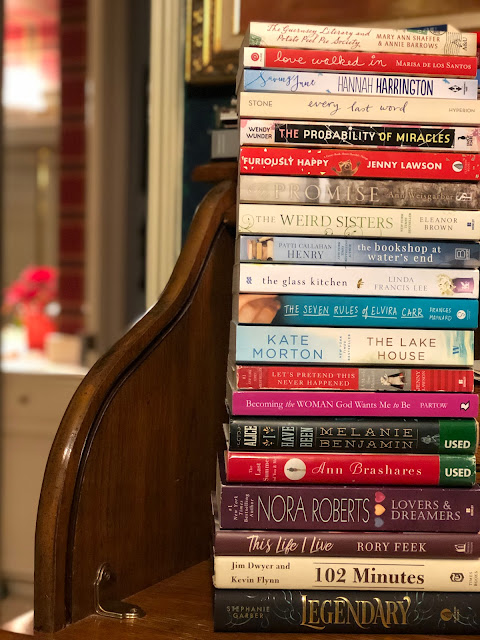 okay. so i’m gonna try my hand at this year’s pop sugar reading challenge. i spent the morning at brio’s with a couple of friends chewing over the list and the books on my to-be-read shelves and have come up with this list:

one. a book becoming a movie in ‘nineteen. the rosie project by graeme simsion.
two. a book that makes you nostalgic. every last word by tamara ireland stone.
three. a book written by a musician (fiction or nonfiction). this life i live by rory feek.
four. a book becoming you think should be turned into a movie. the last summer of you and me by anna brashares.
five. a book with at least a million goodreads’ ratings. the curious incident of the dog in the nighttime by haddon.
six. a book with a plant in the title or on the cover. the care and handling of roses with thorns by margaret dilloway.
seven. a reread of a favorite book. lovers and dreamers by nora roberts.
eight. a book about a hobby. let’s pretend this never happened by jenny lawson.
nine. a book you meant to read in ‘eighteen. elinor oliphant is completely fine by gail honeyman.
ten. a book with pop, sugar or challenge in the title. the sugar queen by sarah addison allen.
eleven. a book with an item of clothing or accessory on the cover. the seven rules of elvira carr by maynard.
twelve. a book inspired by myth/legend/folklore. the lord of the rings by j.r.r. tolkien.
thirteen. a book published posthumously. the guernsey literary and potato peel pie society by shaffer and barrows.
fourteen. a book you see someone reading on television or in a movie. dandelion wine by ray bradbury.
fifteen. a retelling of a classic. alice i have been by melanie benjamin.
sixteen. a book with a question in the title. where’d you go bernadette by maria semple.
seventeen a book set on a college or university campus. maybe someday by colleen hoover.
eighteen. a book about someone with a superpower. miss peregrine’s home for peculiar children by simsion.
nineteen. a book told from multiple points of view. the bookshop at water’s end by patti callahan henry.
twenty. a book set in space. the martian by andy weir.
twenty-one. a book by two female authors. between the lines by jodi picoult and samantha van leer.
twenty-two. a book with salty, sweet, bitter or spicy in the title. hotel on the corner of bitter and sweet by jamie ford.
twenty-three. a book set in scandinavia. bear town by fredrik backman.
twenty-four. a book that takes place in a single day. one hundred two minutes by jim dwyer and kevin flynn.
twenty-five. a debut novel. reconstructing amelia by kimberly mcreight.
twenty-six. a book that’s published in ‘nineteen. all we could have been by t.e. carter.
twenty-seven. a book featuring an extinct or imaginary creature. the hobbit by j.r.r. tolkien.
twenty-eight. a book recommended by a celebrity you admire. where the crawdads sing by delia owens.
twenty-nine. a book with love in the title. love walked in by marisa de los santos.
thirty. a book featuring an amateur detective. the lake house by kate morton.
thirty-one. a book about a family. the weird sisters by eleanor brown.
thirty-two. a book by an author from asia, africa or s. america. the number one ladies’ detective agency by smith.
thirty-three. a book with a zodiac sign or astrology term in the title. water for elephants by sara gruen.
thirty-four. a book that includes a wedding. the glass kitchen by linda francis lee.
thirty-five. a book by one whose first and last names begin with the same letter. probability of miracles by wunder.
thirty-six. a ghost story. a room away from the wolves by nova ren suma.
thirty-seven. a book with a two-word title. saving june by hannah harrington.
thirty-eight. a novel based on a true story. the promise by ann weisgarber.
thirty-nine. a book revolving around a puzzle or a game. legendary by stephanie garber.
forty. your favorite prompt from a past popsugar reading challenge. furiously happy by jenny lawson.