Skip to content
not even the trees
hootie and the blowfish
someone please talk to me ’cause i feel you cry
and you’re sitting with him, and i know i’ll never see you again…
i wonder if you’re looking down at me and smiling right now
i wanna know if it’s true when he looks at me, won’t you tell me
does he realize he came down here and he took you too soon…
right now i just can’t see ’cause i’m feeling weak
and my soul begins to bleed
and no one’s listening to me, not even the trees
god of wine
third eye blind
every thought that i repent
there’s another chip you haven’t spent
and you’re cashing them all in…
the god of wine comes crashing through the headlights of a car
that took you farther than you thought you’d ever want to go…
she takes a drink, and then she waits. the alcohol, it permeates
and soon the cells give way and cancels out the day…
every glamorous sunrise throws the planets out of line
a star sign out of whack, a fraudulent zodiac
and the god of wine is crouched down in my room
you let me down. i said it. now i’m going down
and you’re not even around

there’s not a day where i don’t think of my brother and get either, if not both, of these songs in my head soon after. i, who lived in san antonio then, was listening to the first one right around the time the cops in lake charles were calling my parents in conroe to tell them that their older son, their firstborn had died.

and when my parents called me six hours later, when i made the roughly four-hour drive home, the second song was on repeat. i played it most of the way home because i didn’t know the circumstances. my brother had a drinking problem. it developed when i was in high school. so for a decade, i’d been living under the assumption that, yes, chances were quite good that i would see his death sooner rather than later, and that he would most likely die in an automobile accident. so while i’m making that trek, i’m imagining the physical, literal wreckage. i should’ve been more preoccupied with the figurative kind.

the sky was white that day. there was no break in the clouds, no variance in the hue. it was raining, but it wasn’t. it was more like a mist, like the air was sweating. but it was the middle of march, not hot enough for that. it was like that the whole way home, halfway across texas.

there’s not a day where i don’t see that sky and think, that’s how it was. and every memory of that day and the events to follow flood my consciousness.

i’ve always felt as though my brother was the best of the three of us. imagined him being born on a day that began with a glamorous sunrise, that maybe if he’d been born on a different one, things would be different. it’s a silly thing to think. it does me no good whatsoever.

he didn’t die in a car. he died alone, in front of l’auberge casino resort in lake charles, louisiana. he’d spent his last day on earth fishing with friends. drinking buddies. they’d hightailed it to my parents’ house after he died. i remember greeting them at the door. i remember the air outside feeling oppressed by their grief. the sun had come out sometime between my arrival home and their appearance on our doorstep. i remember their faces, the guilt on them. like they thought it was their fault he’d died because they’d left him alone.

my brother could be a vicious bastard when he was drunk. i was unfortunate in my life that i got to see how callous he could be. he’d gotten so drunk the day he’d died that he’d become that cranky jackass, and they’d left him in his room while they’d gone to dinner, figuring a nap would do him some good. they came back afterward to find that he was still cranky and left him again to go to the casino. when they came back at around ten that night, he was not in his room.

a stranger found him face down on concrete at half past midnight on march twelfth, fifty feet from the resort’s entrance.

the guilt on those men’s faces haunts me. they couldn’t have saved him. no one could.

i spent that first week running errands: calling on his oldest friend to get the word out about the memorial service we had here for him; gathering the things my mother requested; packing for the trip to colorado for his funeral; turning a bulletin board into a photo collage: 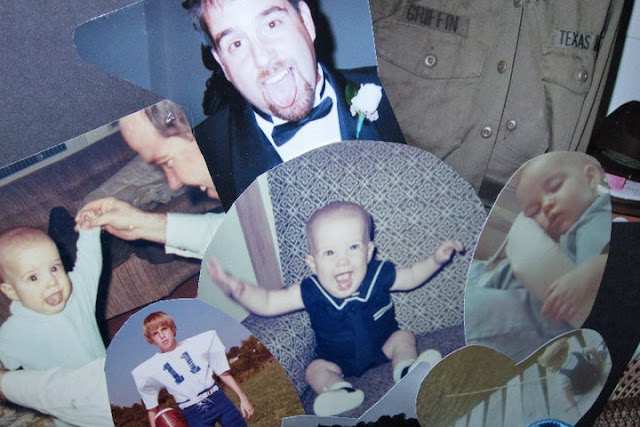 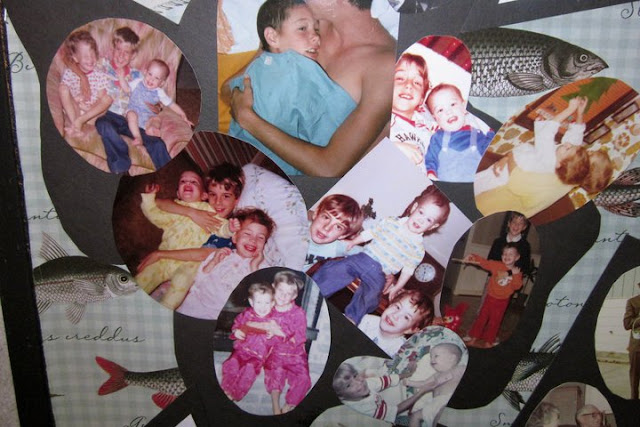 i kept busy. i was so concerned with whether my parents and younger brother and our friends and jon’s friends were alright. i hadn’t been that close with my older brother. i’d been preparing myself for this moment since i was in college so i hadn’t expected grief would sucker punch me.

it waited a couple of months, waited until i was back in my apartment in san antonio. until i was alone. and then…

there were days i didn’t leave my apartment. days i didn’t bother to brush my teeth or comb my hair or change my clothes or shower. it was disgusting. i was disgusting. not so much because i missed him but because i’d fucked things up with him. i’d not loved him well enough. i’d spent the first two decades of my life putting him on a pedestal, and then when he’d broken it, i’d thought he was no better than the rubbish beneath the debris. i’d never bothered to know him.

and i couldn’t lean on my family, didn’t want to weigh them down with my guilt and grief when they were struggling with their own. didn’t want to lean on his friends. didn’t really have friends of my own on whom i could call for help.

here’s the thing, though: the only person i would’ve allowed myself to lean on would’ve been a romantic partner, had i had one. i wouldn’t’ve shared my feelings. i would’ve wanted him to distract me.

i can’t tell you what else happened in two thousand three. that whole year was march. that month dragged on and on and on. i don’t remember anything but death and grief.

i wish this weren’t the case. how awful is it that a whole year could be so significant and so ghostly at once?

you would think the first year would be the hardest. it’s not. it’s the second one. there’s the anniversary of the death. there’s all the holidays and birthdays that he’s not here to celebrate with us.

then you fall into a routine, acclimate yourself to the new normal. you start to forget him: the sound of his voice, the things he loved, the stories he told, the horrible taste in music, the way he could NEVER sing in key. maybe this is a good thing. maybe it helps you heal. you can’t cling to him, to the grief, the loss. he’s not there anymore. not anywhere.

and then people kind of forget that you’ve lost him.

of his friends, the only one who makes a consistent effort to keep in touch is one of his corps buddies from a & m. he tells me stories. he doesn’t mind sharing them. his daughter was born a few years after my brother died, on the anniversary of his death. i have no trouble remembering her birthday. i need to be reminded when her brother’s is.

the other day a friend messaged me because a friend of hers had lost her brother, and she wanted to know how to best help her friend. i told her that my grief might be different from her friend’s because i felt my brother’s death had been intentional: he’d put himself on that path and chosen to walk it to its dead end. i have a lot of anger, still: at god because he couldn’t save him, because he took him instead of me when my brother’s presence in this world was so much more appreciated and by so many (when he was sober, he was amazing, yall. he was beautiful, and i am not); at him for not finding the strength to conquer his demons, for not appreciating how much he was loved; at myself for being angry with god and him and myself, for not loving him, for thinking all these things. i told her i needed to think on this some.

so how could i have been helped…

i don’t need to talk about him. he’s buried in the mountains of colorado, near the rivers and slopes, where his spirit is free to fish in the warmer months and ski in the winter… or so i like to think.

but on the occasion that i want to talk about him, i want people to be willing to engage. my younger brother is never interested in doing this, but he’s an olympic internalizer. i know not to bring jon up with him. every now and then, i’ll see jon in him: in the sound of his voice, his mannerisms, the way he expresses himself. prior to my brother’s death, i’d never seen the similarities. it’s kind of nice to see them now.

i wish i could remember that year. i wish i could i remember the good that occurred then. i wish more of his friends were present in our lives now, not because i want them to help me keep his memory alive but because his death is enough… the death of those friendships just adds to the grief, makes the loss that much more prevalent.

i’d want someone there… often. not to grieve with me but to brighten my world because it was so, so unbearably bleak. i needed color and chaos, the kind that’s born from creativity rather than tragedy.

my mother struggled with what to put on my brother’s headstone. one of the television programs i liked the year he died was called ed. there was an episode where the main character was struggling with something — can’t tell you what exactly, because, again, i can’t remember much from that year — but i do recall from that episode the words life was his art. my mother liked that. and so on my brother’s headstone are the words laughter was his art. of the things i’ve written, the pieces i love the most have come from the most hideous experiences. art’s one of the best therapies there is.

what i miss most is my brother’s laugh and the ease with which he could make others laugh.

in the film steel magnolias, truvy says laughter through tears is my favorite emotion. THAT’S how you get through grief, yall. laughter. the more, the merrier.