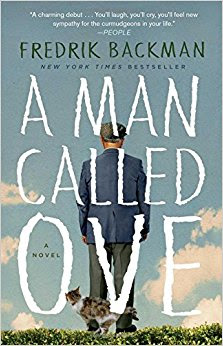 why i read it: because a gal in the book club i’m in picked it.

what i liked: while his proper cup of coffee was brewing, he put on his navy blue trousers and jacket, stepped into his wooden clogs, and shoved his hands in his pockets in that particular way of a middle-aged man who expects the worthless world outside to disappoint him (page 6).

ove was the sort of man who checks the status of all things by giving them a good kick (page 7).

all the things ove’s wife has bought are “lovely” or “homey”. everything ove buys is useful (pages 12-13).

ove wasn’t one to engage in small talk. he had come to realize that, these days at least, this was a serious character flaw. now one had to be able to blabber on about anything with any old sod who happened to stray within an arm’s length of you purely because it was “nice”…

he was well liked down at the railway, quiet but kind. there were some who said he was “too kind.” ove remembers how as a child he could never understand how this could be something bad.

then mum died. and dad grew even quieter. as if she took away with her the few words he possessed (page 39).

“the director asked me to pass on another message… it would be a damned pity for him to be responsible for kicking a decent man’s son into the street just because the son has some principles.”

and so it turned out that ove became a night cleaner instead. and if this hadn’t happened, he would never have come off his shift that morning and caught sight of her. with those red shoes and the gold brooch and all her burnished brown hair. and that laughter of hers, which, for the rest of his life, would make him feel as if someone were running around barefoot on the inside his breast.

she often said that “all roads lead to something you were predestined to do.” and for her, perhaps, it was something.

he never understood why she chose him. she loved only abstract things like music and books and strange words. ove was a man entirely filled with tangible things. he liked screwdrivers and oil filters. he went through life with his hands firmly shoved into his pockets. she danced (page 108).

his days passed like this, slow and methodical. and then one morning he saw her. she had brown hair and blue eyes and red shoes and a big yellow clasp in her hair.

and then there was no more peace and quiet for ove (page 116).

ove had never been asked how he lived before he’d met her. but if anyone had asked him, he would’ve answered that he didn’t (page 131).

so i listened to this one on audible. but i had to look through the pages and mark the passages that spoke to me because i LOVE ove’s and his wife sonja’s love story.

i love how this cranky, quiet man finds someone who can look past the cranky and the quiet and see the good. one of the gals in my writing critique group commented that she couldn’t understand why my guy reese likes my girl isabel. and what i wanted to say to her was because he does. same way sonja loves ove, no matter that everyone she knows would prefer she didn’t. i’m all for stories like this, yall. especially when they’re told as well as this one is.

what sucked: the end’s a little cheesy. the beginning’s a little challenging because ove, again, is a cranky bastard. his character, initially, is hard to love.

having said all that: this should be on your to be read list. there’s a lot more i loved about this book. i didn’t feel like digging through the whole thing for all of the things. there’s a lot of them.

2 responses to “a man called ove”