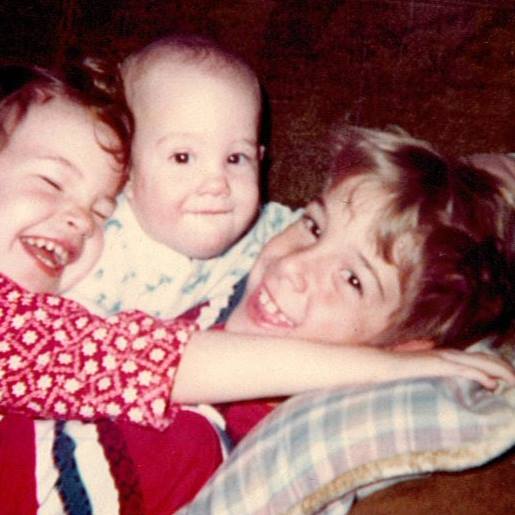 you’ve the best name of the three of us, you know. jon kevin, jennifer kristin and joseph keith. yours is the best. but maybe i think that because almost every time i say it, i hear mom’s voice in my head, her telling of how you said it when you were a baby. someone would ask you what your name was, and you’d say don kiki gehgeh. i can’t make fun of you for that. i don’t get to make fun of you for anything now.
you cheated. bastard.
so next year, i don’t get to spend the whole of october decorating all your shit with black crepe paper and ribbons and balloons. i don’t get to harass you for being fifty.
you cheated. you will always be young. you will always be beautiful. i will always have that goddamned scene from steel magnolias playing in my head, daryl hannah’s voice trying to give me consolation when what i want is to kick you in the nuts for cheating.
i asked you once if you had a death wish, but instead of answering, you turned the question on me. i don’t know why. you should’ve known the answer to that. of course i’ve got a death wish. i’ve had it since i was eight. you can’t spend every day locked inside my head, seeing the kind of shit i see and not want that to end. but your being here, that made it better. made this shit more bearable. you took away one of my reasons to stay. to suck this shit up. to take the ugliness and make it pretty.
it occurred to me earlier today that i didn’t blog about your death day this year. i always blog about it. every year. if not on that day then on the one before or the one after. but for fifteen years, there’s been a post.
you cheated. and now i’m ten years older than my older brother.
i spent a decade hating you. i guess this is my penance. only it won’t be a decade for a decade. it’ll be a decade for every year. it’ll feel like that anyway.
i’m so pissed at you. you should be here. god knows there are more in this world who would miss you more than me.
you should be here so that you can get bambam laughing and show shazam how she’s better than her mama. because good god that boy needs to laugh. he’s angry. he’s so angry. and if he’s anything like you or me… he’s in for a world of hurt. and that girl… she’s a little too susceptible, a little too manipulative.
the boy’s scared of the dark. i tell him that if he thinks on you hard enough — cause god knows i show him as many pictures of you as i can find — that maybe when he dreams you could find him. i tell him when the wind blows it’s you giving us hugs. one time we were out at northshore park: the sun had already set; it was a friday during lent, and we’d gotten catfish dinners from one of the churches then bread from the store to go feed the ducks. the three of us, me and the twins, we’re standing at the lake’s edge, tossing bread in the water. he stops for a minute, holds his arms out in front of him with his fingers touching, a big circle. i asked, bam, what’re you doing? the wind was blowing. he said he was giving kabuki a hug.
i keep thinking of the day of the memorial service we had here, how i was running around town getting the things mama had requested. how i’d broken on the way home, bawling like a baby. not because of you. i was still too angry with you to cry because of you. i was still hating you, though not as much as i had. i was crying because i felt like i was floating in the blackest of waters in the darkest of nights: no light, no compass, no wind. i heard your voice like you were sitting right next to me. i’ll find you someone. i was twenty-nine. gullible and grieving.
maybe if you were here you could have. the boys, i can’t even talk to them, jon kevin. i can’t speak. the words, they’re so wrong. they’re so stupid. you know i can’t. you know why i can’t. but god i envy how it easy it was for you to talk to people. you always said the right things.

mama told me once you’d wished i could be more like one of your best friend’s little sisters. i wished you could’ve been more like the friend. yall’s humor was the same. but he had the stronger will. so how’s that for nasty?

you should be here. bastard.

i’m angry that you left us. that i get to be the one dealing with all the matters regarding the parents and the house and all the shit they’ve amassed… not that that’s happening now… but some day… the irresponsible daughter, the worst one of the three of us has to be the best one. that’s not my wheelhouse. i can’t even keep my car clean for a week.