why i love bubble wrap

i’m not sure i’ve told you this story before. i don’t think i have. one of my readers commented on a post i’d written months ago that she wanted to hear more about the boy mentioned in that post. i’d kind of tagged one of my blog challenge entries to another post — mostly because i hadn’t felt like writing about it at the time.

and then yesterday, when i wrote that bit about knowing about a guy, it kind of caused a memory of which i’m pretty fond to stir to the surface.

it comes up every now and then, usually when i need to remember the good things about love and all that crap.

so … here is a flashback for you from many, many years ago. and no, i don’t recount it because of the boy, but because of how i felt that day.

it was, all in all, a pretty good day.

it was march twenty-sixth. a tuesday. according to astrology, tuesday is my day. whatever. three days before my birthday. i was working at borders at the time, residing in san antonio. my schedule was set up so that i opened on tuesdays, which meant i got off work at five or six, had off wednesdays and thursdays and closed on fridays, which meant i went to work at three. but i’d requested off for my birthday (or borders was nice and gave us our birthdays off … i can’t remember). so i was looking forward to a three day “weekend”. and i’d just started dating this guy i’d thought was pretty cool. so i was in all kinds of good spirits. anyway, it was set up this way because if i felt like going home to visit the family, i could leave on tuesday after work and come home to my apartment on friday afternoon.

but the boy talked me into staying on tuesday night and going to my parents’ house on wednesday morning.

i met him at his apartment at seven or so. we hung out for half an hour, then went to jason’s deli for dinner, where we drew pictures for each other on napkins in brown (mine) and black (his) crayons. and then we went to the amc theater at huebner oaks and saw ice age.

we stood in line to buy the tickets. we went inside, and i made him wait while i hid out in the women’s room to recollect myself. because i was pretty overwhelmed by him. i’d never been that way about a boy before. it kind of freaked me out. so i stood there with my hands pressed to the countertop, just inside the doorway, sucking in air and glaring at my face, telling myself to calm down. a woman walked by and asked if i was alright. sure, i said. no, i thought. not so much. but i got it together and got back to the lobby. 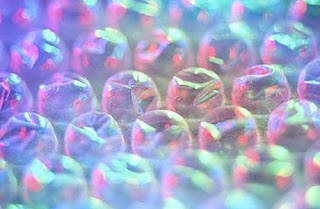 where he was sitting on a bench, popping bubbles on a sheet of wrap. i stood there, watching him, one brow raised and my lips curved in amusement. and all the anxiety i’d felt magically disappeared. i don’t know how long i stood there. it wasn’t more than a minute or so. but eventually, he looked up and grinned and slowly set the wrap aside and stood.

and every time i see a roll of bubble wrap, i think of that day. of how good i’d felt in that moment.

5 responses to “why i love bubble wrap”