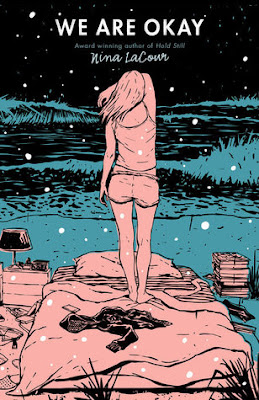 why i read it: i was surveying the teen fiction section looking for a title that began with the letter w for erin’s book challenge. this was after i’d gone through and properly merchandised one of walls of bays because the staff at that particular store have no idea how to nor interest in selling books, apparently… and the obsessive-compulsive gal who once worked as the merchandising supervisor in a bookstore can’t stand to see a poorly-shelved section. seriously. it irks the bejesus out of me. anyway. after i’d gone through and fixed the books, i picked out half a dozen or so that started with w and settled on this one, and i am so glad i did.

what i liked: i wonder if there’s a secret current that connects people who have lost something. not in the way that everyone loses something, but in the way that undoes your life, undoes your self, so that when you look at your face it isn’t yours anymore (page 68).
she leans over our table and turns the sign in the window so that it says closed on the outside. but on our side, perfectly positioned between mabel’s place and mine, it says open. if this were a short story it would mean something (page 71).
next door to me, a woman started howling and didn’t stop… i heard something break. it’s possible that some of the rooms were occupied by regular people, down on their luck, but my wing was full of the broken, and i was at home among them (page 182).
i wish her everything good. a friendly cab driver and short lines through security. a flight with no turbulence and an empty seat next to her. a beautiful christmas. i wish her more happiness than can fit in a person. i wish her the kind of happiness that spills over (page 192).
what sucked: not a damned thing.
having said all that: this was one of those books i read in a couple of hours. the writing is gorgeous. the way lacour tells the story is pretty near masterful, at least to me. it’s complex. it’s tragic. but there’s goodness and love, and it ends well. i thought it was beautiful. and i don’t say that about many books.