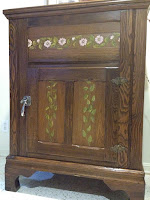 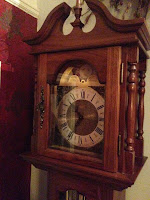 one. march second. national old stuff day. show me two of the oldest and most favored things in your house, and tell me why you love them. so the first of those is the antique icebox my great uncle, the monk, refurbished that his sister, my great aunt lukie, painted. the second is the clock he’d made for my folks. i know both of these things are AGES older than i am. my younger brother keeps forgetting that the chest is MINE. every few years i’m forced to remind him, and my mother has to back me up. it’s got PINK FLOWERS on it, for crying out loud.

from what i understand, you’re also supposed to try something new or go about accomplishing a thing you normally do in a different way, even if it’s as simple as taking a different route to a destination instead of going the way you normally go. make sure you take a picture of the new thing… i need to see that, too.

i forgot about this part. oops. i was all kinds of lazy on this one yall… there is shit i didn’t get done. and the majority of the tasks i attempted to knock out today… 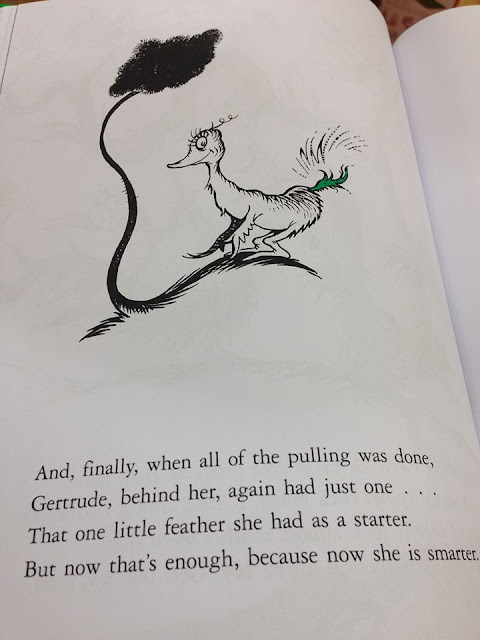 two. also march second. national read across america day, also called dr. seuss day. there’s a film, a nicholas sparks’ story called the lucky one, and in it, zac efron’s logan is talking with taylor schilling’s beth and blythe danner’s ellie about philosophy. beth asks logan, dares him, really, to give them his favorite quote by a philosopher. he does. she assumes it’s something of voltaire’s when in actuality, it’s from dr. seuss:

sometimes the questions are complicated, but the answers are simple.

so what’s your favorite dr. seuss book? what bit of his philosophy do you most admire? i don’t have a favorite. never really been a big fan, but i do love how well-loved his stories are and by so many. they are colorful and fun books, and i can appreciate that. i love giving them to friends who are expecting for that reason. i spent time today in the children’s section at barnes and noble, skimming through a few… 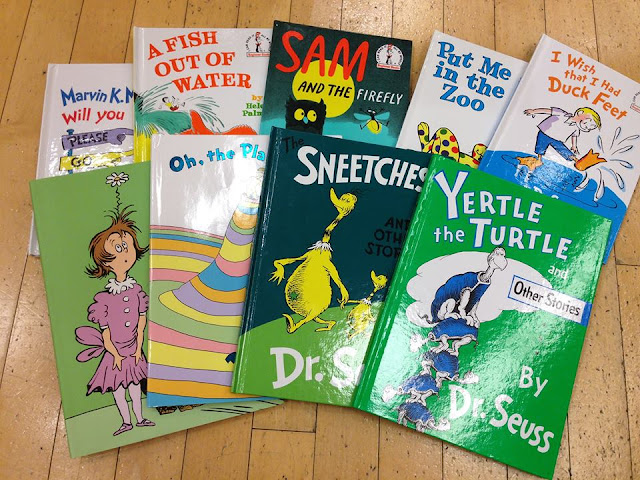 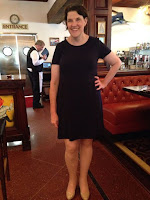 ones i hadn’t read or wanted to read again. and in yertle the turtle there’s a tale called gertrude mcfuzz who isn’t satisfied with what she has, who she is and so she finds away to get a LOT of the feathers she admires, but once she gets them, she is so weighed down by them that she can’t fly. i like the way the story ends.

three. march sixth. national dress day. wear a dress. the whole day. you don’t have to do heels if you don’t want to, but you do have to do the dress. for some of you, this might not be a big thing. for me, i’ve probably put on a dress maybe five times in the past year. i hate the things. i hate having to iron them. i hate having to wear them because you can’t just put on the dress. you have to put on the make up, too. BAH. if you’re a guy reading this, and you do the thing and provide documented proof of having done so, i’ll send you a present. 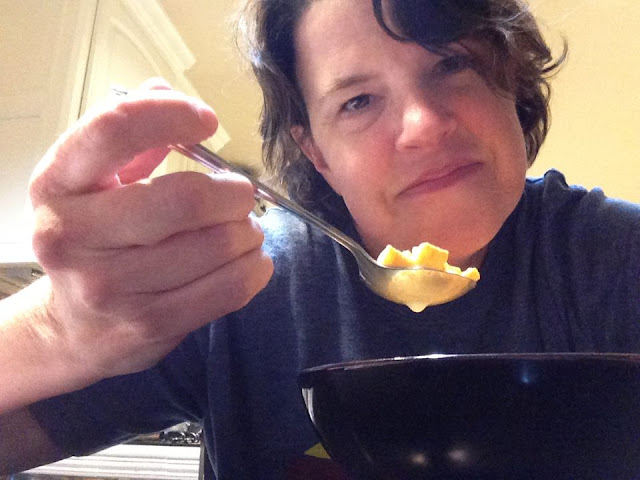 four. march seventh. national cereal day. share a bowl or two of your favorite cereal with a friend. okay. so i didn’t share. it’s cap’n crunch, and i’m a selfish wench.

five. march twelfth. national plant a flower day. pick a spot in your yard and plant your favorite flower there. (also this marked the fourteenth anniversary of my older brother’s death so have a beer for him today, will you? but just one. if you didn’t then, please do so now. that’ll make me happy.)

i found these bright pink knockout roses at the grocery store. this was many tasks that i did not attempt to tackle until the very last day, so they’re not planted, but they are placed where i want them. i hope to get them firmly in the ground by monday morning. we’ll see.

six. march thirteenth. national good samaritan day. do something nice for someone you detest. do something kind for someone who’s known more badness in his or her life than good. be an army of one. so there are only two people i truly detest in this world; one is out of state and the other is god-knows-where-i-don’t-care. there are a couple of friendships that haven’t been what i’ve wanted them to be. so i bought flowers and got a gift card and took these things to only residence i know for one of those friends — her parents’ house. this particular one is a gal i met the summer my family moved to conroe, so i’ve known her for thirty-four years. her birthday is the day before mine. i’m not crazy about how i’ve made so much more of an effort to maintain a friendship or the excuses i’ve made on her behalf in an effort to alter my thinking so that i’m not riding paranoid waves of my shortcomings into guilty cesspools. but i’ve made some really good memories with her. i like to believe there can be more like those. i want good things for her. the last time i saw her, though, i was living in san antonio — at least twelve years ago. so i took the flowers and gave them to her mother to give to her. they told me they were on their way to meet her and her daughter at a sandwich shop for dinner, a fundraiser for her daughter’s high school band. they’d asked me if i wanted to go. at first i’d declined. and then i decided, what the hell, why not.

so right before i got there, on the corner of the interstate and the loop, was a man who was begging for money. there’d been one there earlier. i hadn’t given him anything and felt guilty for not doing so. i kept hearing the scripture in my head… the least of my brethren. this guy was much younger, looked like he was in a better place than the one i’d seen earlier, though not by much. i debated, and then decided, what the hell, why not. i pulled out a twenty and handed it to him, said please don’t go by beer with this. get yourself a good dinner. he told me he was a recovering addict, going on thirty-some-odd weeks. i really hope that’s true. but it doesn’t matter whether it is. it only matters that i feel good for doing what i did, and i do. if he squanders it, that’s on him. 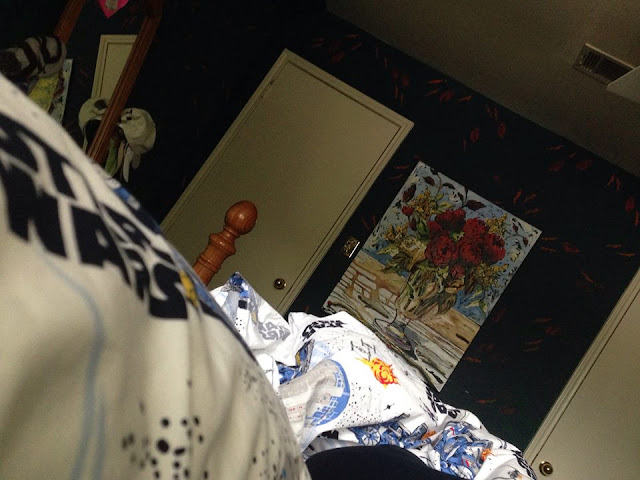 seven. also march thirteenth. national napping day. give yourself a bit of rest one afternoon. lay down, and let your mind wander… dream a little. sheets by pottery barn kids. painting by julia gilmore. 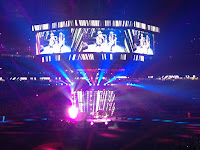 eight. march twenty-first. national single parent day. surely you know someone who’s raising a child all by his or herself. that’s a LOT or responsibility for one person. send them a note of encouragement. if that person lives near you, offer to watch his or her child (or children) for an hour or two. give that single parent a bit of respite.

so the night i originally posted this list, i messaged a few of my single-with-children friends through facebook. the conversation with one of them went like this:

me: hey lady. just checking in. wanted to make sure everything’s going okay with you. everybody doing alright?
her: that’s incredible you’d ask. as a matter of fact, i’m going through some stuff. how did you know?
me: i didn’t. so what’s up?

this is not a woman i know very well. but i’m glad i messaged her, to be getting to know her better. she volunteers at the houston livestock show and rodeo and got me into see zz top. so yeah… this is kind of backwards. it’s the only picture i have to go with this one, yall. i drove into houston, spent a few hours with her. time away from children can be a beautiful thing… says the childless woman. i’ve watched my brother’s twins enough to know this to be true. i’ll send her a note.

i also went to another single-with-children’s birthday party. and the gal from number six, she’s single-with-a-child, as well. so i’m counting it as good enough. 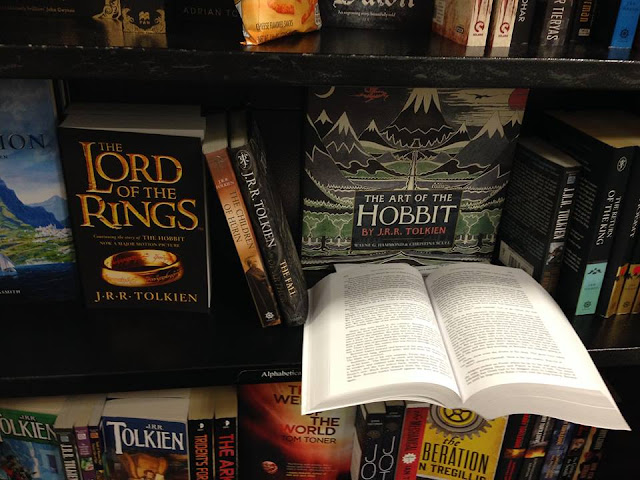 nine. march twenty-fifth. national tolkien reading day. what’s your favorite of tolkien’s tales? what’s the third word on the twenty-fifth line of the three hundred twenty-fifth page of that book? so i used the whole trilogy because the individual books weren’t available. i’ve not read this, by the way… i hear it’s not very well-written… i ain’t got time for that. and when you’ve seen the movies as many times as i have… the word on that particular page is eyes. or maybe it was eye singular. shit. i knew i should’ve written it down. 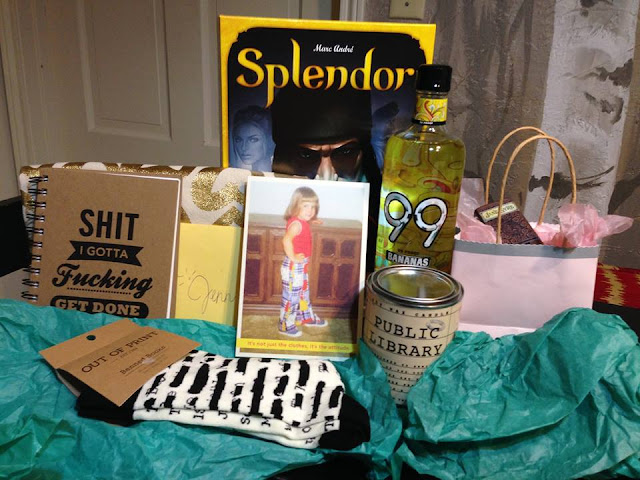 ten. march twenty-ninth. my birthday. send me happy thoughts, preferably via the post because i like getting mail (address is in the sidebar). please and thank you. i know. i’m being selfish. it’s my day. i get a freebie on this one.

okay. all the goodies. the game, splendor, i bought for myself because i was feeling guilty for having borrowed my friend’s copy of it so often. the rest of the loot in this photo are from the gals in my book club, who made me chicken spaghetti and paula deen’s bananas foster bread pudding and gave me all these goodies: a tote bag with shiny, gold hearts (because they knew i would so love to have that), banned books socks, a soy candle scented like a public library and a jane eyre charm with the text:

i am no bird; and no net ensnares me: i am a free human being with an independent will. 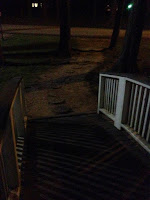 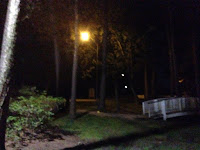 SHITTY photos. i so sorry. i completely forgot about this one. so this is the park near the entrance to my subdivision. there’s a pretty white gazebo and some gorgeous azalea bushes (when they’re blooming… we’ve already missed the spring, so… they gone now, but…) and an itty bitty creek. there’s some really pretty pictures of it here. 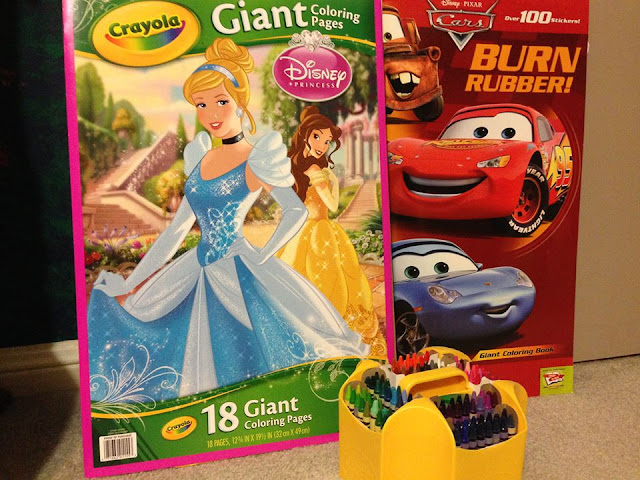 twelve. national crayon day. grab a box of crayolas. color a pretty picture, and then send it to a friend. didn’t get this one done. but I WILL. i swear.

6 responses to “twelve things (sort of) celebrated in march”