this was originally posted august thirty-first, eight years ago. the sweatshirt in the photo below is the same one i’m wearing in that mug of me in the sidebar. it’s not nearly as baggy as it used to be. it had been my favorite, and then it wasn’t, but after some time passed, i can wear it again and love it as i had when i’d first bought it. but, oh there was a time i could not touch it… 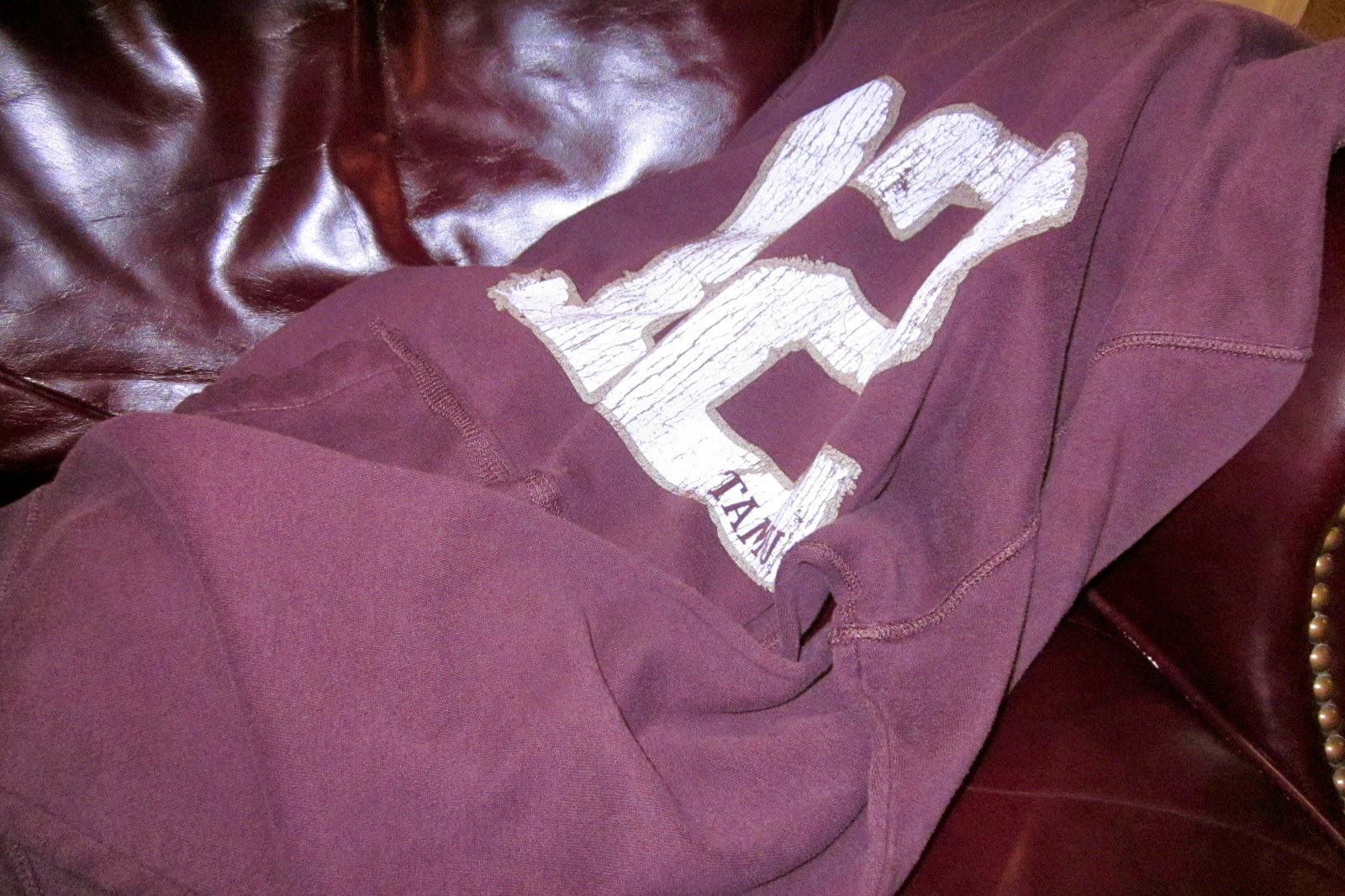 my favorite sweatshirt is one i purchased last year at aggie outfitters at the mall in college station. it’s too big for me, but that’s one of the reasons i love it. it falls to the middle of my thigh, and the sleeves are long enough that my hands are hidden by the fabric. and it’s hooded.

i can get lost in this sweatshirt.

i ain’t that scarred when i’m covered up (beth hart — leave the light on).

and it’s thick, good, strong, warm cotton. wearing it is like being wrapped up in a thick, flannel blanket.

but the best thing is the giant 12 imprinted on the front in worn white numbers, trimmed in gold. big, bold blocks of twelfth man.

i wear it when my soul is at its weakest.

i was walking the streets of cardiff at three in the morning, back to the hotel after a quest to find a debit machine so i could get the cash i needed to pay the cab fare for transit from the hotel to the airport.

like any other city, the streets of cardiff at three a.m. look nothing like the streets at three p.m. i marveled at the city’s ability to clean up the excessive debris from a drunken night of debauchery in such a short time. if one were to be on those streets at ten a.m., all evidence of the previous night’s party would have been swept up and tossed in the garbage. but on this night, as i was walking, i think there might have been two hundred plastic cups broken and crushed on the concrete in front of one bar. i passed a lot of bars.

and here’s me, who’s been up for maybe ninety minutes, who’s exhausted from a mediocre vacation and a mild depressive episode. i’m shoving my way back to the surface. at least, i’m trying to do so. i’ve had a good day’s rest, and i’m bound for the airport, for family, for home, so i’m a little better.

but better is a fragile thing.

here’s me, in my comfort clothes, making my way through the crowds as quickly, as unobtrusively as possible. i’m a little scared, so i don’t look at anyone directly. i try not to call too much attention to myself.

but there’s that giant, white twelve, and quite a few notice it.

no one says anything. not until i’m a couple of blocks away from the hotel, just around the corner. and i’m thinking almost there, almost there. i’m reveling in the knowledge that i’ve made it unharmed.

three men walk by me. after they’ve passed, one of them calls out, hey, twelve! you’re not a number! you’re a female!

i’m considering saying something when i hear another say, and ugly!

mentally, everything stops. in my head, i just stand there, frozen, shocked, humiliated, hurt, and horrified that my day has begun this way. in my head, i cry. i can almost feel the breath freeze in my lungs and my heart stop, just for a second.

but outside, i appear as though i am unfazed. there’s not a hitch in my step that betrays me. there’s not a shift in my posture so that my shoulders seem slumped. i keep walking.

it’s that i’ve not heard it in a while. that i liked my face well enough when i got dressed that morning. that it’s been said by someone on the other side of the world.

it’s that the sentiment is now universal.

and the sweatshirt, the thing that once provided some small bit of solace, i’ll have to get a different one, a new one, for that because this one is now tainted by the taunts of three men i met on the streets of cardiff at three in the morning, and every time i look at it, i’ll think of them, of that day, of that ugliness.