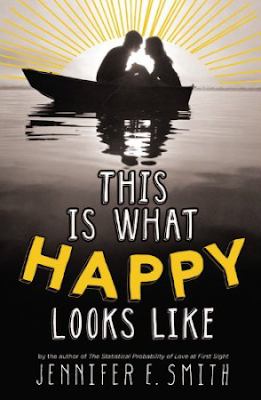 why i wanted to read it: i went to the library to get a couple of books (because i don’t already have a lengthy to-read list): forman’s if i stay and jennifer smith’s the statistical probability of love at first sight. i found the first with little trouble, but the second title was hiding and would not be found. i spotted this one and snatched it up, thinking it might be cute.

what i liked: so little.

childhood memories were like airplane luggage; no matter how far you were traveling, or how long you needed them to last, you were only ever allowed two bags (p. 116).

ellie watched as the little girl handed her father a postcard with a picture of the sun rising over the ocean. but the mother had corralled the boys out the door and was calling sharply for the other two to join them. the dad shrugged helplessly at his daughter, whose chin trembled as she clutched the postcard to her chest.

“she can just take it,” ellie found herself saying, and the man spun around with a look of surprise. his daughter beamed at him, then skipped off with the card in hand, a memory that might only make it to the corner, or the end of the trip, but that would–with any luck–be carried with her at least a little farther than that (p. 121).

no matter how long it’s been or how far you’ve drifted, no matter how unknowable you might be, there were at least two people in the world whose job it was to see you, to find you, to recognize you and reel you back in. no matter what (p. 342).

what sucked: so much. that it was four hundred four pages of trite crap. seriously. this is the kind of crap that makes breaking into the publishing business such a pain in the ass. four hundred pages? i don’t mind lengthy novels so long as they’re packed with awesome. and no, not every page has to be so, but there sure as shit needs to be more than two pages. hell, that’s barely half of one. and that’s not even awesome. that’s the best this book’s got, though.

having said all that: maybe i’m being a little harder on it than i ought to be. but the author? she works in the industry as an editor. if i’d sent in something of the same caliber, it wouldn’t get more than a half-second’s glance… it’d go into the slush pile, and when the editorial assistants got around to looking at everything else that got tossed there with it, they might give it two seconds, and then it’d go in the trash.

maybe i’m a little frustrated. it’s just that i can write better than this. and it makes me a little annoyed when others’ work, which is considerably less, gets printed. also, i stubbed the same toe on the corner of some brick twice in thirty minutes. and maybe i’ve been a little too spendthrifty lately. these things do not a happy gal make.

i used to really like the name graham. and now i’m gonna think of this lame dude from this lame novel.