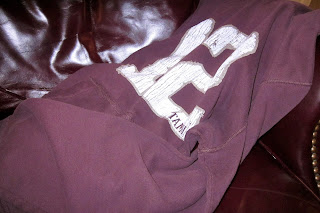 the most recent addition comes from my friend, melissa.

why must you always wear oversized sweatshirts?

well, first of all, i don’t always wear them. at the moment, i am clothed in a gray t-shirt with red letters across the breast warning that vader is coming and advising one to look busy.

busy is typing up this here post while watching a really bad chick flick known as the prince and me. for some bizarre reason, i like it.

second, if i had the dedication and determination to have a figure similar to yours, you can bet your ass i’d be walking around in tanks and cut-offs all the time.

at the moment i weigh one hundred sixty-two pounds. for me, that’s a whopping figure, the most fat i’ve ever had on my body. my friends and family keep badgering me about how i should do something about it. i don’t even wanna know what my body fat percentage is. the last time i was on a get healthy kick, when it began, i believe i weighed about eight pounds less than i do now, and that percentage was thirty-three, which is pretty unhealthy.

three decades ago, i was about twenty pounds underweight. easily. and my doctor kept telling me that he’d rather i be twenty pounds overweight. that weighing more was less of a health risk.

but the reason for the sweatshirts, when i do wear them–which is, admittedly, often–hasn’t changed too much.

i have never liked my body. ever. not as a whole. and i know that each of us has one thing or another that troubles us about our physiques. i have about thirty of’m. scars, mostly. i don’t like looking at them. i don’t like knowing that they’re there. why they’re there. though i have to admit, when i’m not attempting a healthy lifestyle, i don’t mind them quite so much. probably because i’m more bothered by the excess pounds.

in addition to the scars, there’s the shortage or surplus of weight to consider. nowadays, sweatshirts help to take my mind off the fat tire situated above my hips and the doughnut that is my belly.

when i was in high school, they helped hide the length and thinness of my frame. my peers were less apt to ridicule me for my scrawniness, my seemingly anorexic state, if they couldn’t see it. i wasn’t anorexic, by the way. i was much less sedentary than a lot of them. if i wasn’t swimming–which is a huge if, by the way–i was out walking, making up stories and clearing my head. if i wasn’t walking, i was riding my bicycle. i did this for hours every day.

now, i spend quite a bit of my time on the couch, reading or watching a movie. or sitting on a stool at pappadeaux’s, writing.

so, i wear them to hide, basically.

but also because they give me comfort. when i’m down, it’s like i’m wrapped up in a blanket. so they help me feel better, too, i guess. usually. it almost always works.

a good example of it not doing so is here.

One response to “the thirty-second question”