Okay, I know you’re probably expecting a quote from Ghandi or John Lennon or the Dalai Lama. Or maybe even someone like Nora Ephron, or just one of those quotes that you see painted on colorful canvases at Ikea or World Market.

My quote, the quote that unexpectedly changed my way of thinking in a dramatic manner, is from none other than pro skateboarder and reality television star Rob Dyrdek. You might know Rob from his MTV shows “Rob and Big,” “Fantasy Factory” and “Ridiculousness.” If you have a half a brain and choose to not watch MTV (clearly I am not one of those), well then I applaud you, my friend. But you probably won’t know who I’m talking about.

You wouldn’t think of Rob as a traditionally intelligent man. A man who is adept at business dealings and marketing and networking. I mean, the guy hosts a ‘roided out version of “America’s Funniest Home Videos,” for God’s sake. His other show, “Fantasy Factory,” focuses on the way in which he spends insane amounts of money on absolute nonsense.

He paid marine specialists to have a shark bite him so he could earn a kick-ass nickname. He hired a guy to help him get abducted by aliens and another guy to assist him with traveling through time (both endeavors were sadly unsuccessful). He entered a grilled cheese cooking competition, skateboarded down water slides at an abandoned water park and recorded a music video wearing a fat suit.

Not traditionally intelligent, right? Yet, something he said during an episode of “Fantasy Factory” really struck me in an interesting way.

The episode was entitled “Dirty Man-Horse,” and Rob had decided to try his hand at being a jockey. Part of training to become a jockey, apparently, involves purchasing weird furry strap-on horse legs and clomping around town in them. While his 8-foot self was galloping around, Rob told his cousin, affectionately known as Drama, that he was planning to purchase a race horse and jockey it, to which Drama replied, “You can’t just hop on a horse and jockey it.” Without skipping a beat, Rob said, “You can do anything you want in this life. I got horse legs on.”

Dumbest thing to say ever, right? Something about it, though, was just so incredibly liberating and empowering. You can do anything you want in this life.

When we’re kids, our parents tell us we can be whatever we want to be when we grow up. We can do whatever we want to do. But once we hit a certain age, we start to tell ourselves that we can’t really do those things. That it’s not realistic. That it’s just something that adults say to kids because they’re too naïve to understand. And maybe we can’t do all of the things we hoped we could do. We certainly can’t be dinosaurs when we grow up or transform into a puddle like Alex Mack (remember that show?) or live on Neptune. But most of those other things you dreamed of? You can do them. If you really want to, you can. If you put aside all the excuses, which are usually just fears, you can do anything you want in this life.

Rob Dyrdek is proof of this. This middle class guy from Kettering, Ohio became a professional skateboarder at age 12. He now has multiple television shows, owns several companies, runs a charity, builds skate parks throughout the United States, is immortalized in video games, earned 12 Guinness world records… the list goes on and on. 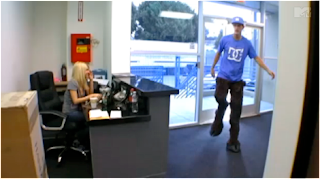 Rob helped me realize it’s never too late to try something new or begin a new adventure. You’re never too old to take up glassblowing or visit Amsterdam or swim with the dolphins. Your opportunities are endless. Next time you second-guess yourself, remember Rob. Wearing his horse legs. Preparing to jockey a horse for the first time. Realize how much more normal your dream is, and jump on that shit! Don’t let yourself get in your own way, and certainly don’t let anyone else tell you what you can or can’t do. Just put your horse legs on, and kick the crap out of life. You can do anything you want in this life.

my friend kathryn gave me this lovely post. and i’m so happy to share it with yall. other contributions were provided by erin, danielle, susannah  meredith and melissa. i hope you’ve enjoyed them. thanks for reading.

One response to “the quotes collective: kathryn”