the pejoration of privilege 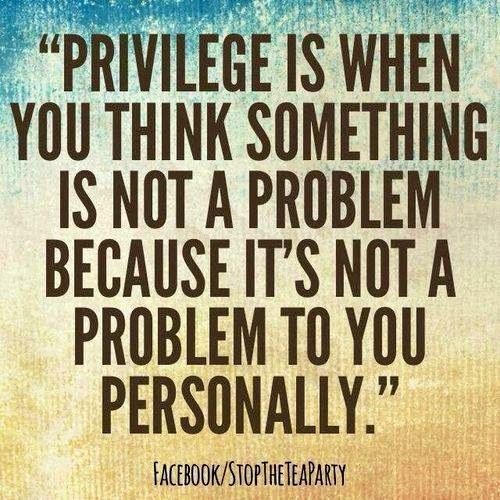 let’s talk about privilege, yeah? i keep hearing people use that word, and the way it’s thrown around these days you’d think it’s as vile and offensive as a four-letter word that begins with c and rhymes with punt.

my ancestors are welsh, irish, scot, english and austrian. i am the middle child of an upper-middle class couple — high school sweethearts who attended the same university because my father couldn’t bear to be too far from my mother. my father likes to joke that he wasn’t the smartest one in his class but he was smart enough to marry the smartest one. he played football and was in a band and a fraternity. she was in band as well and a sorority. they became teachers. he became a school superintendent. they had my brother, who seemed to be pretty perfect. my mother had two miscarriages — one before my brother and one after. and then they had me.

let’s talk about privilege. my face has been cut up three times. my stomach and left leg have been cut up once and my right leg twice. if it weren’t for my parents’ love, if they hadn’t wanted a daughter so badly, if my mother’s parents hadn’t been a doctor and a nurse, if she hadn’t helped in her father’s clinic, if my father hadn’t attained a master’s degree in special education… if my body had demanded more medical attention than it has, i could be rotting away in some institution, which is where i’d be if my doctors had their way.

let’s talk about the patches i had to wear on my face or the metal braces that were on my legs for god knows how long during my infancy that my mother threw away the moment i didn’t need them anymore. the times i’ve had people ask me if i’m talking to them when i’m looking right at them only it doesn’t look like i am because one eye’s off in lala land. the number of times people have asked if i’ve asian heritage because my eyes look like they do. the times i fell off curbs in my youth because i couldn’t see. the times i’d be walking… just walking and something in my leg would snap or slip just because, the way i’d crumple, clutching my knee and screaming obscenities because the pain was immense. the times i’ve had to glue myself against an aisle in a grocery store or the wall dividing the dining area from the ordering stations in chic-fil-a because i’d lost all cognizance of space and my place in it and felt like i was spinning and about to tumble… and maybe break something else… because things in me break so easily. let’s talk about the times people stare at me like i’m a freak. the number of times they ask me what the hell is your problem? and driving at night on a freeway? that’s fun stuff. really. i love it. i do it because i have to, because damned if i’m going to stay home when i want to be out. but it was a whole lot easier when my town had twenty-thousand in it instead of a hundred thousand. it was a whole lot easier when people could give each other some room.

let’s talk about the times my teachers assumed that because my father was who he was i would be this exemplary student — well-behaved with strings of a-pluses in their grade books. i would make them look GOOD. i didn’t. and when i didn’t, their response was to recommend i be placed in special education or relegated from honors to level classes.

sure, if i came home without my books on the weekends, my father would haul my butt to school after sunday mass, unlock the place and practically drag me to my locker. he would not be happy about it. sure, my mom would bench my butt at the kitchen table to work on an assignment that was due the week before because she was so pissed at me for being so thoughtless and disrespectful… and lazy.

god knows i’d be living under a bridge somewhere if it weren’t for them. god knows if my father hadn’t been who he was, the peers who’d bullied me in my youth would’ve done a lot worse. with the exception of one altercation in fifth grade in which a boy jabbed my face with one of my perfectly sharpened pencils that left a permanent mark, they never touched me. i think they were too afraid to do so. but you can maim a person’s spirit with words, and those wounds never heal so well as the physical ones do. hell, if it weren’t for my folks, i doubt i’d be here today, banging on these keys.

you think because my skin is white that i can’t know tragedy?

let’s talk about the time i came home from school sobbing and telling my mother i wish i could tear my skin off. or the time a teacher put my desk in an appliance box so she wouldn’t have to look at me because she couldn’t bear the sight, because she didn’t want me in her classroom but was forced to keep me because i was too smart to be in a different one.

i’ve buried a brother, a man i spent a decade hating. i carry that guilt with me, and it weighs on my heart something fierce. i have lived my life without ever hearing a man other than those in my family say he loves me and mean it. i battle some godawful mental demons on pretty much a daily basis.

tragedy doesn’t play favorites. it cares not for race or creed or culture. it doesn’t give a damn about color or shape. it’ll screw with you regardless of whether you’re single or married, rich or poor, black or white, fat or thin, kind or callous. it. does. not. care.

today i learned a couple flying from sacramento to philadelphia were booed by passengers in first class because the pilot had requested that couple be allowed to deplane first so as not to miss their connection. so as not to miss their flight to dover where they were to claim their dead son, a soldier who’d been given a gold star for his service. the folks in first class booed them because of how inconvenienced they were at having to wait, that someone in coach should receive preferential treatment when they’d paid the exorbitant costs of flying first class so they could be more important.

the pilot gave that couple a privilege. because if ever there’s a time one should be given it’s then.

i’ve had the youngbloods’ in my head so often lately. come on people, now. smile on your brother. everybody get together. try to love one another right now.

One response to “the pejoration of privilege”