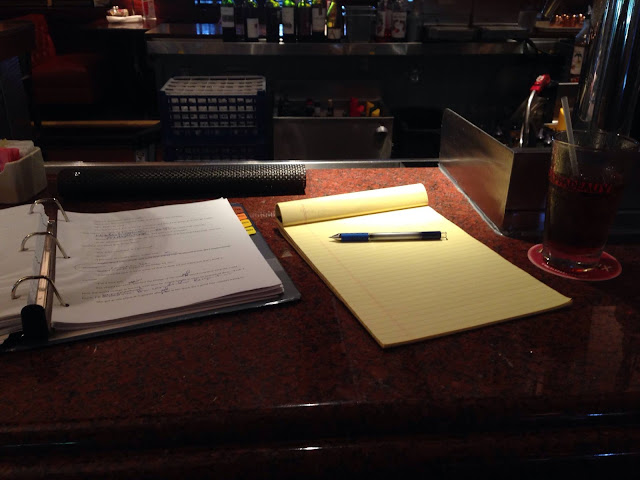 one. the words will not come. i’m a member of a critique group that meets regularly on wednesdays, and over the past two months, i have taken a total of four pages of the novel that has been in inconsistent progress since january of nineteen ninety-fucking-seven. i know. I KNOW. i suck. we’ll get to that in a minute. last week, i took three pages. the week before i took one. and when i say pages, i mean typed, double-spaced pages of twelve-point times new roman text. i write by hand, so those pages, in the case of those from last week, were six in number and single-spaced…

one of the servers just interrupted this train of thought with: that doesn’t look like your book. she’s standing right next to my barstool, her face inches from mine, her eyes wide and dark, her lips set in a smirk of utmost displeasure. she is batting her lashes at me and glaring.

the scene that has plagued me is one that i am rewriting because the words that were there were shit, and i hated them so i killed them because i knew i could do better. i know i can. i need my reader to feel for my character, and in reading what was written, i felt like my reader would’ve hurled the book across the room, kicked it a few times and then thrown it in the trash. i can’t have that. i love my characters too much to allow that to happen.

so the words won’t come, even though i know exactly how this scene will play. i know that when it’s done well, my reader will want to be hugging both of these characters, these children of mine.

it’s not like the scene will necessitate that much of the handsy… my girl’s gonna freak the fuck out and then have to explain to her boy why she did so. and her reasons for doing so are justifiable and good. but… she wouldn’t give them unless she absolutely must, and the only reason she’d do so is because they were getting handsy and she had to put on the brakes all the sudden. the shit that happens before and after is written. it’s just those handful of sentences that will connect the dots… i need them, and i can’t write them.

two. the words will come, but not in opportune moments. like when i’m in the shower. or when i’m driving. yes, it’ll make me sound like a crazy person, but basically, i will hear my characters’ voices in my head. and i can’t record the conversation because. i’m. in. the. damned. shower. or on interstate forty-five, which is packed like sardines, only instead of gross fishy things, it’s monster trucks and expensive sports utility vehicles and luxury sedans, all traveling faster than the state-mandated speed limit of sixty-five miles per hour. there’s no such thing as following distance here, yall, which is probably why the stretch of this particular bit of interstate is one of the deadliest in texas. there’s no way in hell i can chicken scratch that shit on a whataburger bag or snag my cell phone to leave a voice memo so i can jot them down later. the words will have to wait. and if i’m lucky, they’ll stick with me until i can write them down. but that hardly ever happens.

three. the words come, but they belong in some other scene or some other character. like the words that came to me yesterday while i was in the shower and, later, running to popeyes to get my dad his lunch.

four. i allow myself to be distracted by the television or the servers or the pretty day or the good book or movie or football game or… because writing IS work. anyone tells you it’s easy, that person is a lying sack of shit. pardon the cliche… but it’s true. try putting seventy thousand coherent words together in a manner that’s going to make someone LOVE them. i dare you.

it’s SO much easier to spin your wheels on a back road in the country on a pretty day while listening to stevie ray vaughan and guzzling dr. pepper than it is to spin them while sitting for hours staring at a blank piece of paper and sipping iced tea.

in that rare instance you write something that’s brilliant… it’s. BRILLIANT. and then you stick it between two chapters that you thought were decent. the brilliance of that one chapter makes it so ALL the other chapters look like crap. so much so that you question your ability to write, and you end up thinking you’re shit, and, mentally of course, YOU hurl the manuscript across the room, kick it a few thousand times, and then bury it in your closet. and days, weeks, months… maybe even YEARS go by before you find the courage to dig it out again.

five. you have to work. like a REAL job that actually pays your bills because the chances of your writing ever doing this are slim to none… while you’re getting your english degree, your professors are saying this over and over again… you’re probably not going to make any money doing this… it’s like they DON’T want you to choose this path… because honestly what sane person would WANT to write seventy-thousand words, get rejected seventy-million times and get paid seventy dollars for the work? sure that’s an exaggeration. but it’s a good one.

so the only time i end up being devoted to this manuscript of mine is when i’m NOT working.

the two biggest reasons it’s taken me TWO DECADES to get this bitch in the ground, so to speak (i’ve seen kevin smith in catch and release far too many times), is because when i’m working a full-time job, especially one that requires me to stare at a computer screen eight hours a day or where i’m surrounded by books (because those people CAN write and convince someone that the writing is good enough that it does indeed merit publication… that’s not intimidating AT ALL)… the last thing i want to do when i get off work then is stare at a computer screen and work on a book that’s going to be rejected seventy million times. i’ve never handled rejection well. i can’t bear to think that these eight characters i’ve created will endure so much rejection, too.