the divine secrets of the ya-ya sisterhood 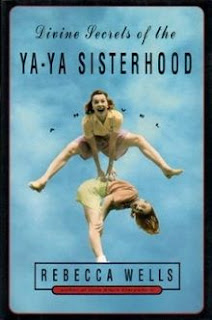 why i wanted to read it: because i love the movie and it was on buzzfeed’s list of books read by rory on the gilmore girls, one of the categories for erin’s book challenge (i just typed categorie’s… so all you people who think i write well, please know my typing is shit). i did the audio on this one, too, so i can’t mark specific pages, but…

what i liked: the author reads this one, which i love, and she reads it well. having seen the movie first and because the actors accents and tone are similar to the way wells reads it, i could picture the performers, which i loved. it’s a VERY well-cast film, by the way; i’d always thought so, but listening to wells read it really drives that idea home. it’s been so long since i’ve seen the movie that i couldn’t recall whether a particular scene was included in the screenplay; i don’t it was, and i felt it was crucial to the plot: not long after her sixteenth birthday, vivi is enrolled in a catholic school, which results in some traumatic experiences for her (i won’t say what). i loved knowing this part of her history, and my heart, which broke for her in the film, cracked even more because of this bit of plot. there’s also a spot that includes letters sidda wrote vivi in her childhood. i loved knowing of them, and i don’t remember them being in the film.

what sucked: there’s a sex scene that i didn’t think was necessary. and, having seen the film first, there are parts that differ, and the difference makes the film much better than the book. it doesn’t pack quite the punch in the more dire moments that the film does, and i really wanted those conflicts to be as crucial in the book as they were in the film.

SWEET JESUS, MARY AND JOSEPH
I FINISHED THE CHALLENGE!!!
this has NEVER happened,
and i’m SO, SO stoked that i knocked this fucker out. YEE!!
on to the bonus round, which i WON’T finish come month’s end, but i AM going to read all the books i picked for it.