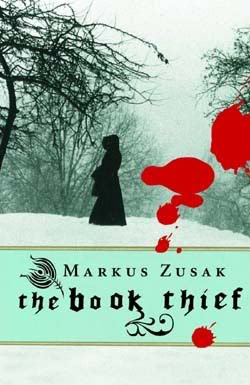 why i wanted to read it: because erin sent it to me years ago, and i finally decided to tackle it for her latest book challenge in the nonhuman character category.

what i liked: first the colors. then the humans. that’s usually how i see things. or at least, how i try… i most definitely can be cheerful. i can be amiable. agreeable. affable. and that’s only the a’s. just don’t ask me to be nice. nice has nothing to do with me (page 3). (that’s a damned fine first page, by the way. there’s a prologue… it doesn’t count.)

the question is what colour will everything be at the moment i come for you? what will the sky be saying (page 4).

people observe the colours of the day only at its beginnings and ends… a single hour can consist of thousands of colours… in my line of work, i make it a point to notice them (page 5).

she was the book thief without the words.

trust me, though, the words were on their way, and when they arrived liesel would hold them in her hands like the clouds, and she would wring them out, like the rain (page 85).

even papa’s music was the colour of darkness.

the strange thing was she was vaguely comforted by that thought, rather than distressed by it.

the dark, the light.

what was the difference?

nightmares had reinforced themselves in each… (page 108).

it reminded her of an unpopular child, forlorn and bewildered, powerless to alter its fate. no-one liked it. head down. hands in pockets. forever. amen (page 119).

as he looked uncomfortably at the human shape before him, the young man’s voice was scraped out and handed across the dark like it was all that was remained of him (page 187).

the frozen motives of rudy steiner

1. after months of failure, this moment was his only chance to revel in some victory.
2. such a position of selflessness was a good place to ask liesel for the usual favor. how could she possibly turn him down?

‘how about a kiss, saumensch?’

he stood waist-deep in the water for a few moments longer before climbing out and handing her the book. his pants clung to him, and he did not stop walking. in truth, i think he was afraid. rudy steiner was afraid of the book thief’s kiss. he must have longed for it so much. he must have loved her so incredibly hard. so hard that he would never ask for her lips again, and would go to his grave without them (page 326).

there are skies manufactured by people, punctured and leaking, and there are soft, coal-coloured clouds, beating, like black hearts.

making his way through all of it.

on the surface: unflappable, unwavering.

while liesel sat in the dark, rudy tried on the suit behind one of the curtains. there was a small circle of light and the shadow dressing itself.

when he returned, he held out the lantern for liesel to see. freed from the curtain, the light was like a pillar, shining onto the refined suit. it also lit up the dirty shirt beneath, and rudy’s battered shoes.

liesel continued the examination. she moved around him and shrugged. ‘not bad.’

‘not bad! i look better than just not bad.’

she had seen her brother die with one eye open, one still in a dream… she had seen a jewish man who had twice given her the most beautiful pages of her life marched to a concentration camp.

those images were the world, and it stewed in her as she sat with the lovely books and their manicured titles. it brewed in her as she eyed the pages full to the brims of their bellies with paragraphs and words.

you bastards, she thought. you lovely bastards.

don’t make me happy. please, don’t fill me up and let me think that something good can come from any of this. look at my bruises… i don’t want to hope for anything anymore. i don’t want to pray that max is alive and safe. or alex steiner.

because the world does not deserve them (page 353).

having said that: it’s good. it made me cry, and it’s rare that a book has that kind of power for me. listen to this one, though, rather than read it. i got about two hundred pages in before giving up and borrowing the audio book from the library. the guy who reads it does a pretty good job.