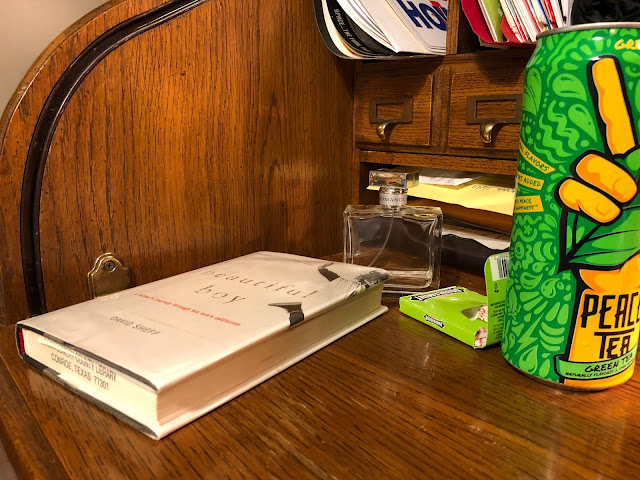 about a year ago, a friend invited me to join her book club. it’s a great group of women, and i feel so blessed to be considered their friend, but since joining, i’ve read two of the books chosen, and one of them was my pick (also one i’d already read — the language of flowers). the other was a man called ove. i eventually read a third, beach music, but not because of the book club so much as i needed a book for one of the categories of erin’s book challenge (feel free to join… there are about six weeks left in this session, but she always welcomes latecomers, and she’ll start another challenge in a couple of months… it’s neat to flip through the albums and see what others have read). anyway. three books out of like twelve. that’s not bad, but most of the girls have gotten in the habit of joking that i won’t read it anyway…

we’re reading beautiful boy this month. i’m on page forty-four. i’m reading it because i’ve chosen to watch the movie adaptation for the fall film challenge (we’re only a couple of weeks in, and i, too, welcome latecomers… it’s neat to flip through the albums and see what others have watched).

i’ve been more hopeless the past couple of months than i normally am. probably more than i’ve been in my life, actually. i’m not fighting as much, i’m becoming more and more merciless about the things i keep. gwyneth paltrow plays plath in the film sylvia. there’s a line: i feel like there’s nothing behind my eyes but air. i understand that line now. i understand how a person could feel that way. for most of my life i’ve felt like there’s nothing behind mine but water. it doesn’t feel like that anymore.

i started bible study this week. we’re reading joshua. that name means the lord saves, by the way. or so my notes told me. i’ve gotten off to a good start, much better than i have in the past. yesterday and today, i spent the better part of an hour reading parts of proverbs, of my own accord, and the recommended reading from our notes: bits from genesis, psalms, romans…

and then i’ve taken my copy of beautiful boy and read while walking around my neighborhood.

off and on in the course of my life i’ve thought that i don’t believe it’s possible that a man could love me. i know why he should. i know i’m worth loving, even when i’m feeling my absolute worst, i know that in my heart. my head, though… the older i get, the more difficult it is for me to believe in that possibility. i’ve given up, actually. not because i want to, but because it’s almost easier to live without the hope.

so i’m walking and reading and come across this passage on page thirty-two:

our first cautious date is at a friend’s party on the upper east side. the fine young cannibals play on the music system, waiters circulate with trays of champagne and canapes, and then, though it is a sweltering night, i walk her the length of manhanttan to her downtown loft. it takes a couple hours, during which time we do not stop talking. whenever we come upon an all-night grocery, we get popsicles.
it’s dawn when we say good night at her front door.
i stopped when i read that. stopped and read it again. and wished i could know what a date like that was like without having to read about it in a book. how sad is it that a forty-five-year-old woman only knows love from the books she reads and the people she sees?
before i fell into that well of despair, i made myself get moving again, reading and walking.
i want someone to see me the way ove’s wife sees him, the way grant sees victoria. i want to know the man who can’t help but stay and talk with me.
my friends are quick to suggest bumble. i’ve been on there. i can barely get a man to say hi. i don’t want to meet my guy that way. it doesn’t have to be anything fantastic. i don’t need extraordinary. that’s what books and movies are for.
i’ve prayed. i’ve gotten down on my knees and sobbed against my comforter and begged.
the last gift my older brother gave me was at christmas: a bottle of ralph lauren’s romance. i spray it and think of the day after he died when i was out running errands, getting things for the memorial service. i heard him say i’ll find you someone. such a delusion, but i believed it.
which is worse? wanting love in your life and not getting it or wanting to live without it?

One response to “romance”