random quarter: the (sort of) thirty-one days in july edition

one. ten random facts: a) i’ve never been stung by a wasp, though i was certain the one flying about my living room moments ago was going to get me; b) i love applesauce; c) i’ve never been to denmark; d) i wasn’t a fan of shakespeare until i was about thirty and a professor at the university of texas at san antonio taught me to love him; e) i’m not a fan of admitting that i ever attended classes at any of t.u.’s campuses, though i must admit that particular branch had some of the finest professors i’ve ever known; f); the only time i’ve liked burt reynolds was in smokey and the bandit; g) i’ve never liked john wayne (but in his defense, i’m not one for westerns); h) at the moment i sound a little bit like the aflac duck; i) i find it incredibly challenging to not use foul language; j) i have trouble sleeping.

two. nine things for which i am grateful: a) family; b) friends; c) employment; d) days off; e) netflix/apple tv; f) microwaves; g) televisions; h) the internet; i) the mute button.

three. three goals i want to achieve by the end of the year: get back down to a size eight (well, really, i’d rather be back in a six, but that kind of sounds unrealistic); finish my novel; find an agent. 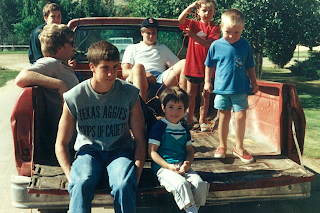 four. my biggest inspiration growing up was my older brother. he’s the one in the gray cut-off sweatshirt.

five. five of my favorite things: a) eleanor and park; b) star trek; c) pottery barn kids’ darth vader backpack (the old one. not the new one they’ll soon be stocking in stores; d); carbonated, caffeinated beverages; e) texas a&m university. (and some of these things are up for grabs this month. see picky presents.)

six. if i could meet anyone dead or alive, at the moment, i would probably wanna meet jenny lawson. she seems pretty cool.

seven. a favorite memory from school… i’m assuming school here means kindergarten through twelfth. my junior year, after practice, we’d go to fudrucker’s to eat and hang out.

nine. i don’t know that i would call them favorite, but the apps on my phone that i use most often (aside from four at the bottom of my screen) are for facebook, the internet movie database and cinemark.

ten. my favorite television show growing up was probably the cosby show.

eleven. i wish i were better at controlling my emotions.

twelve. of the travels i hope to take, at the moment, i’d most like to venture up california’s coast.

fifteen. my favorite keepsake: the antique icebox my great uncle restored and my great aunt painted.

seventeen. one of my favorite people.

nineteen. my bag’s contents: wallet, keys, cell phone, pen, a scarf from one of my mother’s friends who passed away a few years ago.

twenty. why i blog (and then some). 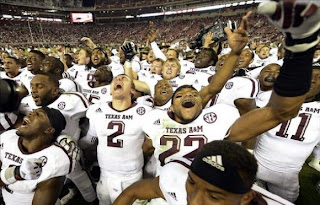 twenty-four. my best friend is my younger brother, and if you’re clicking when i bother to create a link, you will have read about him already. (see number thirteen.)

twenty-five. five favorite films: star wars: episode v–the empire strikes back, the lord of the rings: return of the king (the director’s cut), star trek (the one with chris pine, karl urban, simon pegg, john cho and anton yelchin), serenity and steel magnolias. i find it interesting that four of these five are science-fiction.

melissa at two miracles is challenging folks to blog every day in july. join in here.

One response to “random quarter: the (sort of) thirty-one days in july edition”