one. pay off my college loans.

two. get current with all my bills.
three. personal training on a much more regular and frequent basis, so my ass could once again fit into a size-six pair of gap boot cut jeans.
four. phineas restored to his supremely awesome self. i’ve scraped up his belly and his right side quite a bit.  also, i’ve not detailed the leather since i bought him six years ago. shame on me.
five. that apartment i was telling you about? i’d snag that sucker up and keep it forever and ever and ever.
i know what you’re thinking. why an apartment? why not a house or a …
because there is no yard to maintain. there is no maintenance for which i must set aside funds or headaches caused by that maintenance that i must medicate. you call the front office. you say my so-and-so is busted. and you wait while they get right on that. that’s about as much of a headache as i’ve had to suffer when it comes to that stuff.
and i am one person. one person does not need more than the space one apartment would provide. this right here? this is plenty.
six. a graduate degree at texas a&m university.
seven. lifetime season tickets to kyle field, preferably in section one-forty-three, row one, on the aisle.
eight. restoration hardware’s lancaster leather sofa 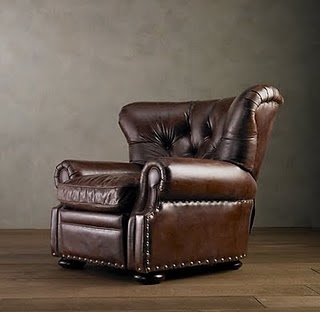 nine. restoration hardware’s churchill reading chair. once upon a time they called it buster. i like the old name a whole lot better.

ten. pottery barn kids comfort chair, slip-covered in walnut washed linen.
eleven. modifications to the pad to make it more me.
twelve. pay my parents back.
thirteen. give some to my brother.
fourteen. give some to my niece and nephew.
fifteen. vacation in england, ireland, scotland, austria and greece.
sixteen. wardrobe shopping sprees at anthropologie, banana republic and the gap.
seventeen. new boots. because mine are literally coming apart. and this makes me sad because i loved them so. but alas, i will have to learn to love another pair.
eighteen. every album on rolling stones’ five hundred best list. i never liked the who, for example, but then i made myself listen to one of their greatest hits compilations until i could at least appreciate them. and it’s actually kind of easy to do that with some of their songs. so maybe if i immersed myself in some of the other selections, i might could acquire a taste for a few of those as well. because god knows the music scene right now sucks ass. i keep turning on the radio thinking that i might hear something that will speak volumes to me. and it rarely ever happens. (and every time i think about this, i realize this must be how my parents felt when their music went out of style … it’s not sitting well.)
nineteen. donations to aids and cancer charities and research and to the march of dimes.
twenty. new television.
twenty-one. pottery barn’s printer’s media hutch. 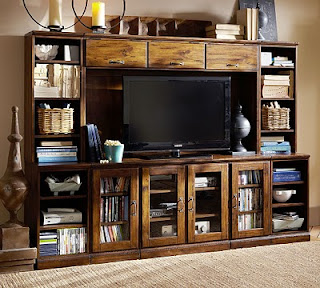 twenty-two. williams sonoma. i would spend hours in there. hours. and it would most likely be a total waste of that money because i can’t even make cinnamon toast. but, oh, i have such a huge fetish for kitchen shit. shoes? handbags? not really my thing. not that i won’t go on the hunt for the quintessential accessory, but really? that sense of near-orgasmic glee most girls get over a pair of manolo blahniks or whoever is the it-shoemaker for the moment? i don’t get that. ever. i’m happy with a pair of forty dollar flats (although i would be ecstatic if i could find a near exact replica of the pair of boots i’m going to have to replace). a finely made cutting board, on the other hand …

twenty-three. every film that’s ever won any oscar in any category.
twenty-four. barnes & noble. i would spend days in there. DAYS.

twenty-five. get my teeth fixed.

One response to “random quarter: the how-would-you-blow-a-shitload-of-dough edition”